The Blaueishütte in the Berchtesgaden region lays at 1680 m altitude and is embedded in the midst of the disappearing glacier, tall walls, short boulders and lots of exciting goals nearby. The wooden terrace, gets really sunny just after everyone has left in a hurry. After 10 am, you will be blessed with the warming sun rays on your face, and panoramic views down to Hintersee and the Hochkalter at 2607 m behind. A pretty setting when the sun shines.

Our chances didn’t look rosy that day. In fact, it looked pretty grey.

It seemed as if Petrus (the weather angel)  was doing everything in his might to make us angry. He started emptying buckets of water over us right after we closed the car door and had our backpacks on our shoulder. He made sure we would be wet not only inside but also outside and so, he made it certain that we used our entire rain equipment after 10 mins of our start and continued to empty the buckets 2.5 hours long. I would love to meet Petrus one day and give him a piece of my mind. Under my breath, I cursed and sweared. It was humid, and too hot to wear any jacket properly.

The mood was nevertheless cheerful as we made our way through the steep forest road until an intersection when you turn into the trail that lead up to the Blaueishütte. Little steps, well chipped and prepared, led us in serpentines under the huge faces of the walls until we reached the Blaueishütte.

I wondered why none of the wall was bolted. There was potential. 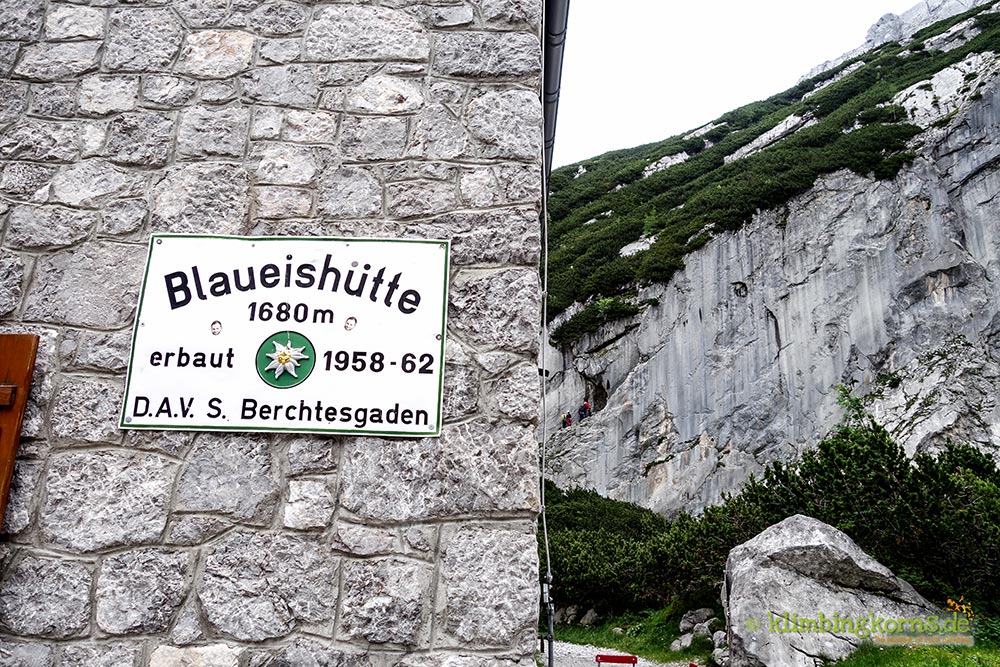 Plenty of climbing courses took place near the Blaueishütte, despite the lousy weather

Coffee and cake at the Blaueishütte

It was then when the skies started to clear and Petrus gave up bucketing on us. We warmed up with a huge portion of cake (Donauwelle!) and hot chocolate, checked in, changed into dry and warmer clothing. Oh the sun! We then sprang out of the hut at the first sign of better drier weather. 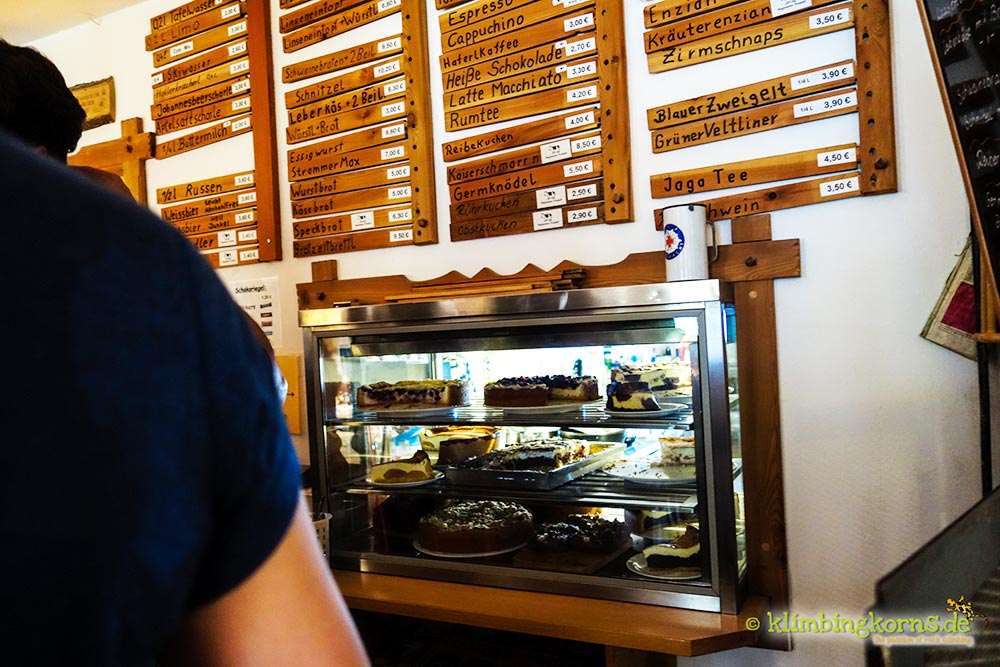 Don’t come in too late for the cake.

The day was too early to sit idly at the lodge, and there was plenty of energy and motivation in our legs. Shall we conquer the Steinberg? Shall we explore the boulders that were so near? (initially, that was the idea) Somehow, the way led us instead right to whats left of the Blaueis glacier as we stomped our way through the slippery slushy snow and stopped somewhere where I thought, the Hochkalter was  above us. False alarm! The weather threatened with the next downpour, and I knew that Petrus was up to mischief again. We headed back to the hut, saw a marmot or two hopping along the way. 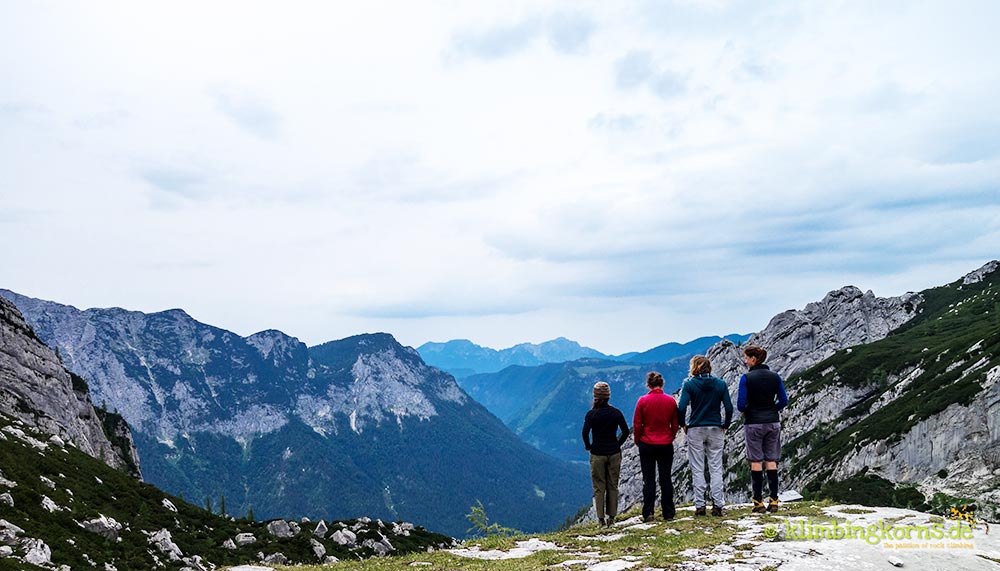 We come in differant colours and sizes. 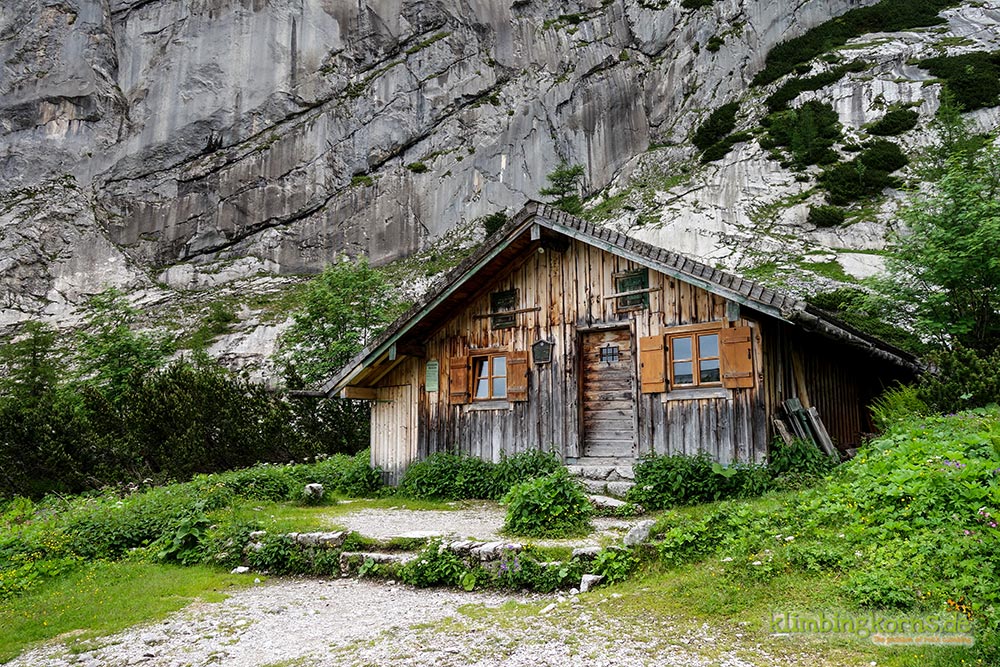 A quaint little Alm just next to the Blaueishütte

At night we found ourselves splitted up in two groups and had the honor to share the room with 4 other snoring men. First thing in the morning when my male neighbour woke up, he finger pointed me and said “Also, ihr Mädls habts ganz sche gschnarcht gel.I hob koa Aug zua gmacht!” (which was an accusation that I snored and the reason he didn’t get much sleep) Hmmm, neither did I. I had Ohropax in my ears, and yet heard the one who slept above me loud and clear. When will they learn to make really good ear plugs that melts in your ear?

Breakfast was calling and I was glad the night was over.

After a “hearty” meal that looked more like the leftovers of a cereal muesli, and an empty pot of black tea, Petrus waved a new showered greeting upon the hut. Sleepily, I wished to head back into the bed, (now that the room was empty) but instead I took a stroll to the end of the wooden terrace in search of a little network connection. The precipitation radar appeared after a few minutes and confirmed what the weather forecast  had said.

Time for Petrus to take a breather. High time! 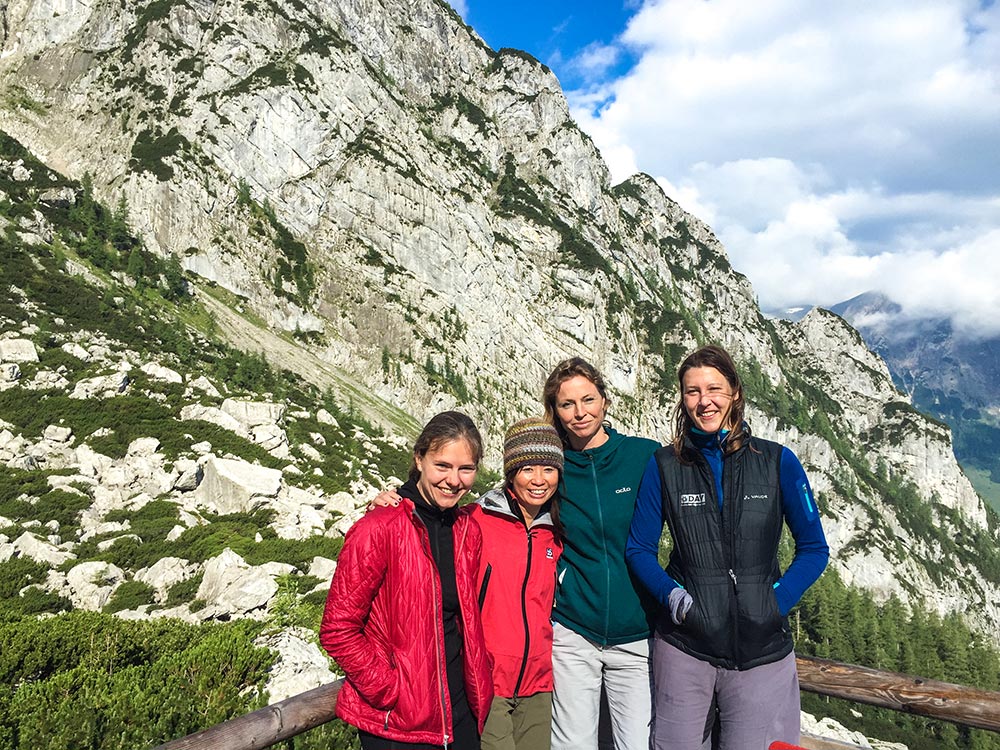 The first sun rays of the morning (© Zwerg-am-Berg)

I took a last visit into the hut and made a short query on how the snow situation was at the Eisbodenscharte. The answer was unbelievable! Poor guy, It must’ve been a bad start to the day !

We left the Blaueishütte and reached the bottom of our summit after a short walk. The Schärtenspitze. The trial started off with the first short steel ladder and serpertined its way steeply to the top.  The way was pinned with steel ropes but the trial wasn’t too difficult. Sometimes, it was good to have a rope in the hand to gain good balance from the wet rocks, but it was never critical. The crux of the ascend was about 50 m just before the summit and the summit itself. 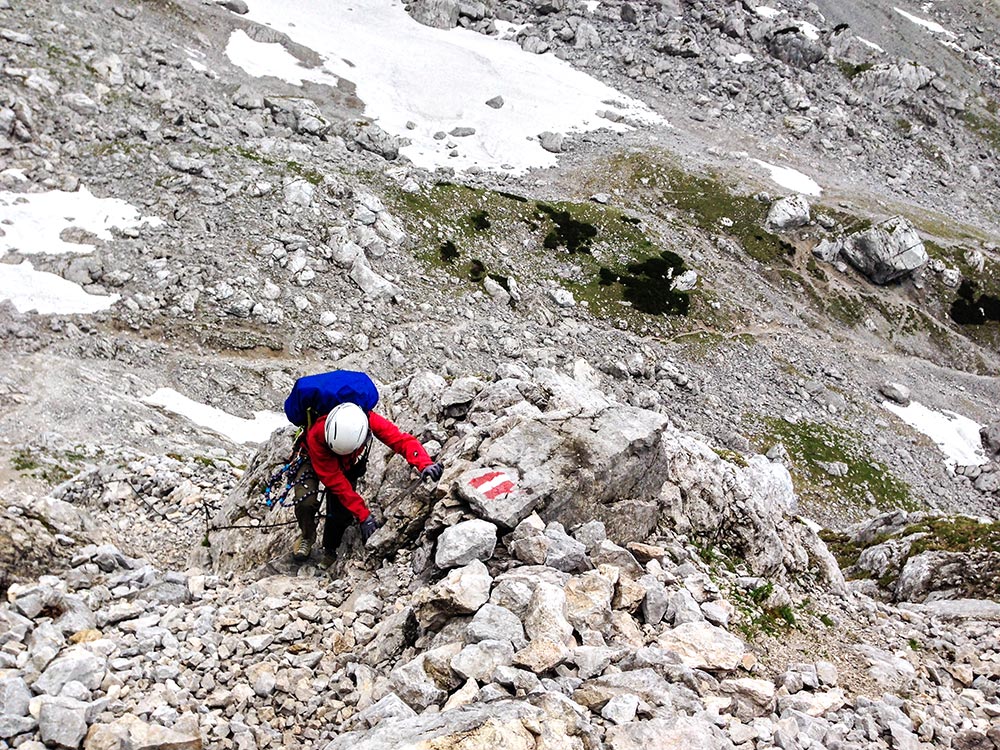 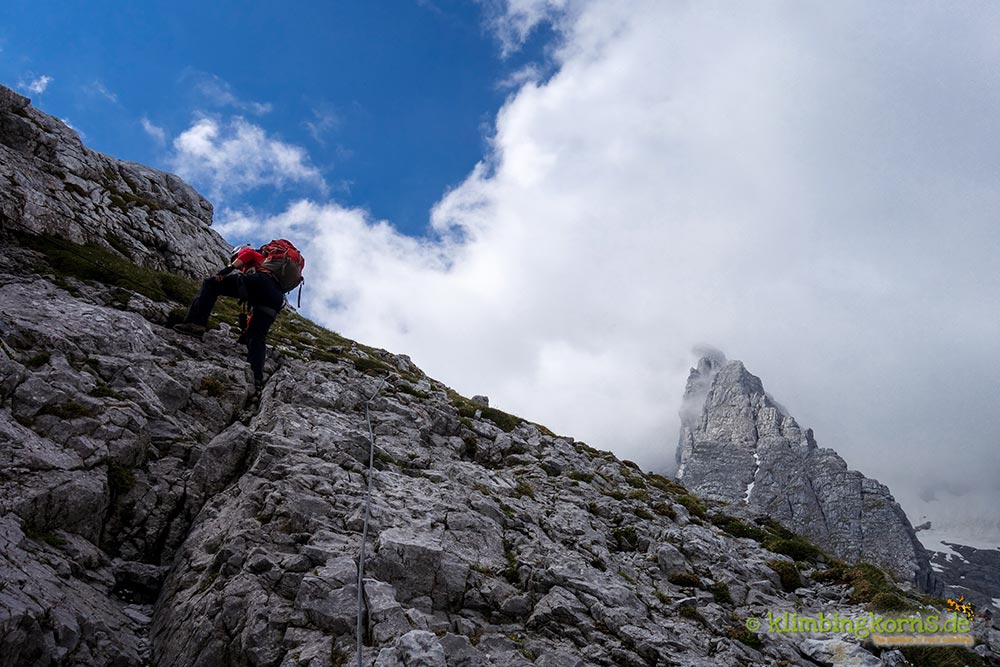 The Blaueisspitze on the right

The summit is in sight! 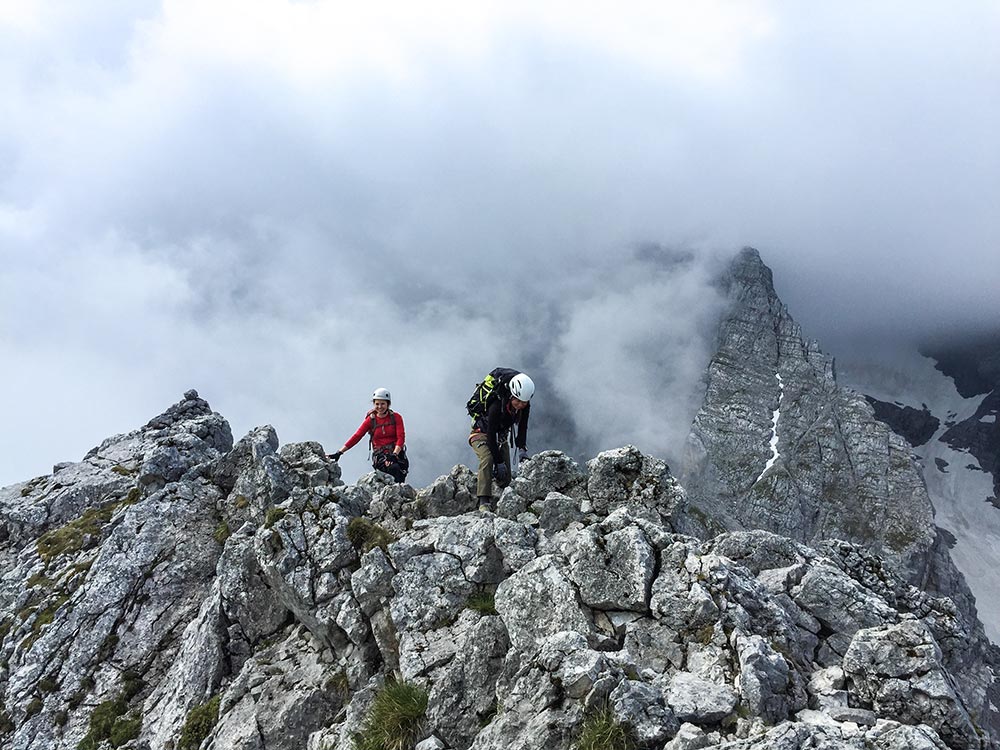 Lo and behold – the summit cross! Gradually, the skies opened up. 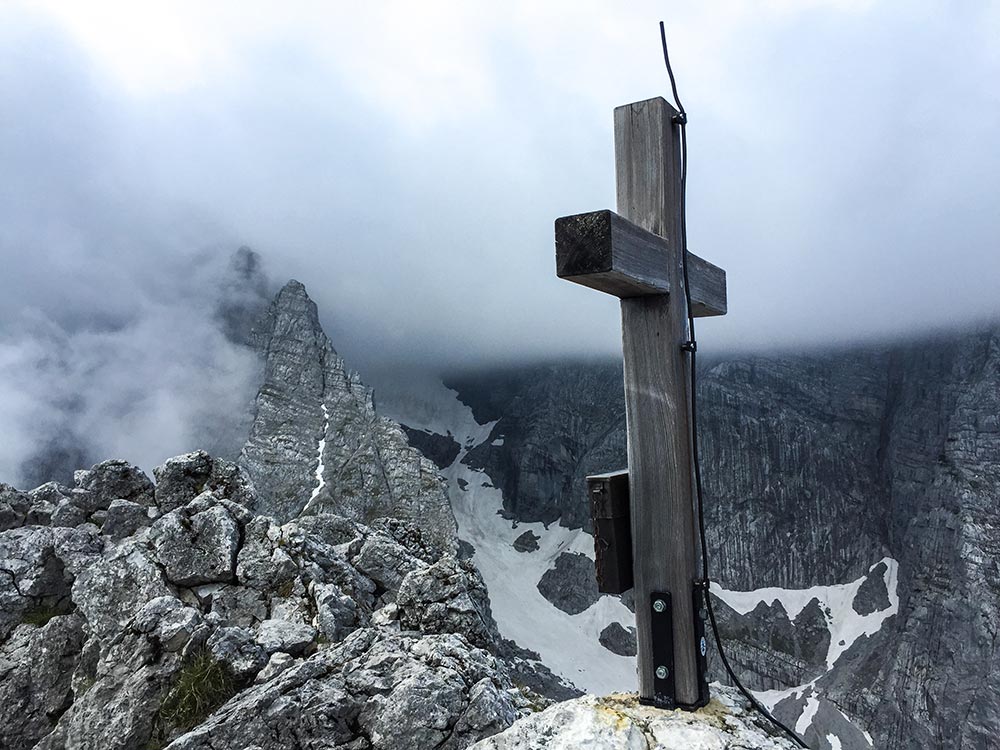 After a short break at the top, we made our way to cross the ridge to the Eisbodenscharte. The trial was thin and stoney and there were views that went all the way down vertically in the valley on one side. Again, critical sections were secured with steel ropes. Feel free to slackline them. Right at the end, the crux of the trial started. 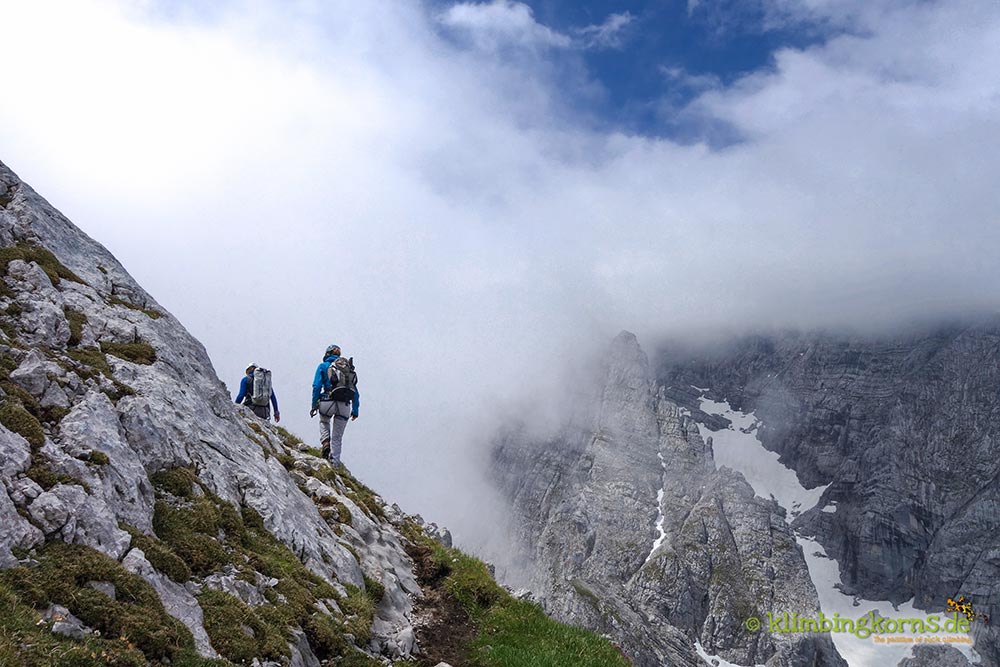 The ridge that crosses to Eisbodenscharte 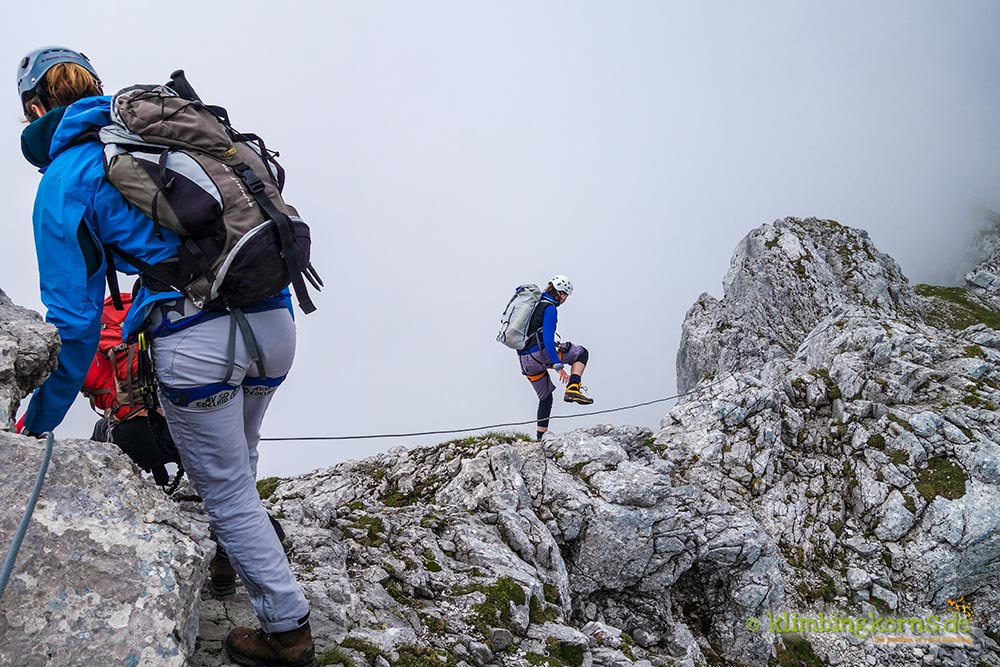 Anyone in for slacklining?

We all looked down and took a deep breather, stepped forward, descending, hoping not to step on a wrong piece of rock that would set an avalanche of rocks down the wall. 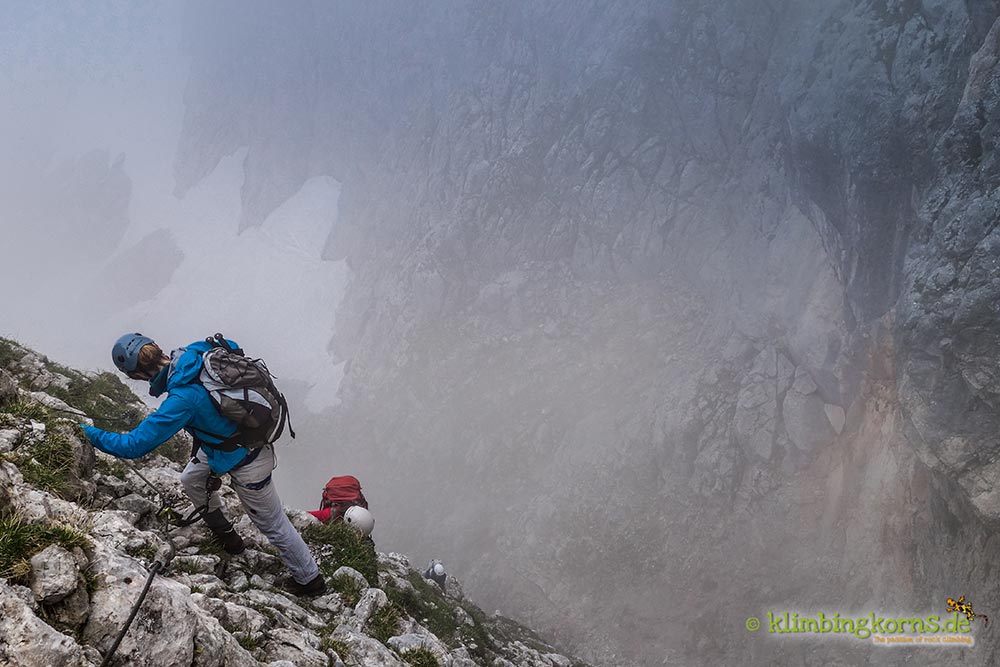 The crux at the Eisbodenscharte

The fog started to get really dense and raindrops came. There wasn’t much time to think about Petrus and his mischiefs, instead we concentrated looking out for each step to take, and hoping that we won’t find any surprises at the other foggy end of the Via-Ferrata. It felt like a descend into the unknown. Everything went well, a few bolts holding the rope was out of place, but it was not like some of those I have seen during my last visit in the Dolomites.

As we reach the bottom the fog started to clear and we had a better view of the crux. Wow. It had been a good idea to bring our helmets along. Rock falls can possibly happen if it gets crowdy. We stopped again for another short break as the view cleared up and we had Watzmann right in front of us. Definately better than TV. 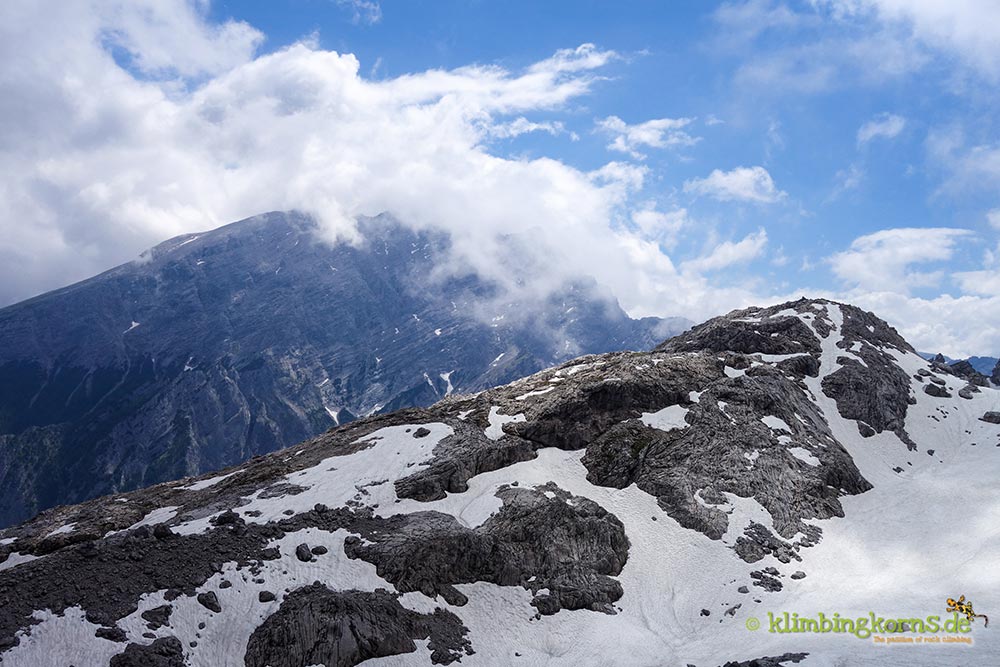 Views to Watzmann at the other side 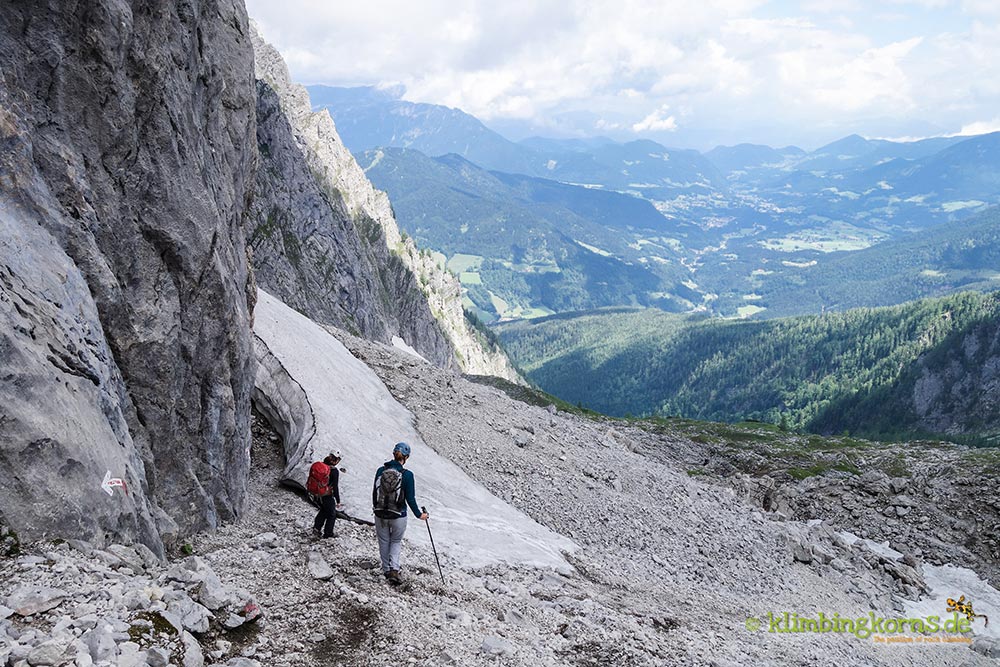 The way was free from snow and ice. Nothing to be concerned about

The rest of the descent was rich in variety. There was something differant as you pass by each altitude level. Washed out glacier rocks, hints of snow, green juicy meadows and just after reaching the Hochalm, a small trial turns left, leading back to the Schärtenalm. 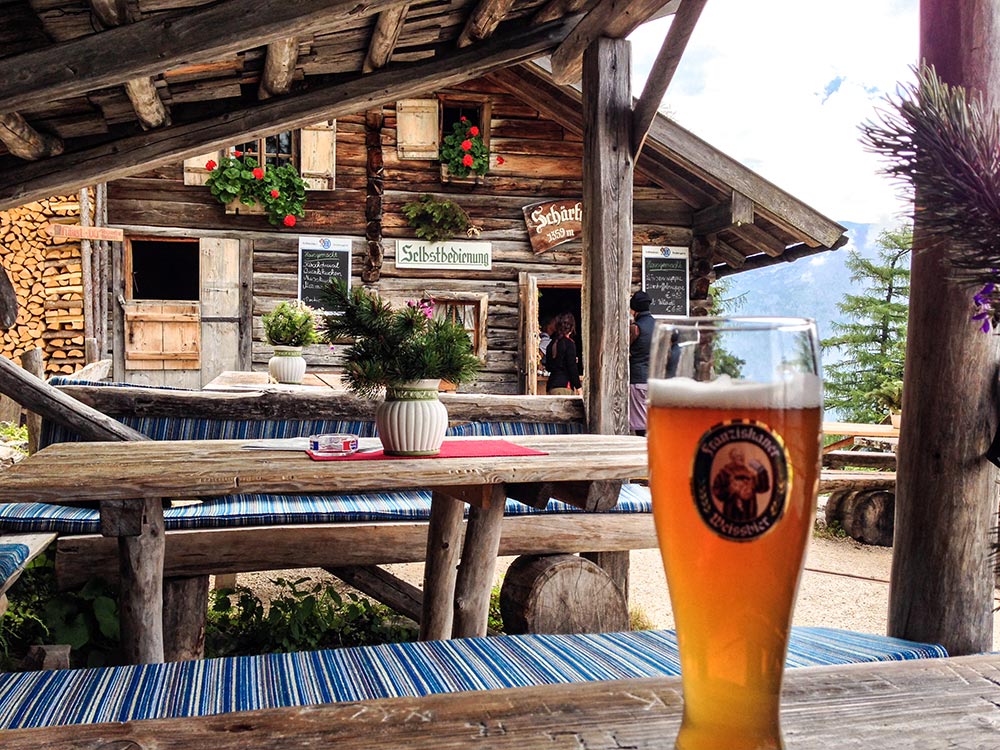 Need I say more – a break was a must at the last point before we reached the parking lot in Hintersee.

What a view! What a weekend! What a team! Thanks ladies, it was an awesome foursome!

General Information of the tour:

To download the track on your gps device, choose “GPX” in the dropdown and hit the OK button.

* Times may differ depending on your condition.