The Outdoor Blogger Advent Calender 2016 is running in its 3rd year, originating from a splendid idea from Sven at AufundAb. Each day for 24 days, a different Outdoor Blogger will tell their story. A wonderful chance to get to know many of the exciting german OUTDOOR bloggers. Following Luftschubser’s post yesterday, I present you today a little winter adventure before it continues tomorrow with Outdoorblog.org. If you’d like to read even more, take a look at the #outdooradvent from 2014 and 2013 or use the hashtag to find everything about it. Have a peaceful Advent season, wherever you are! 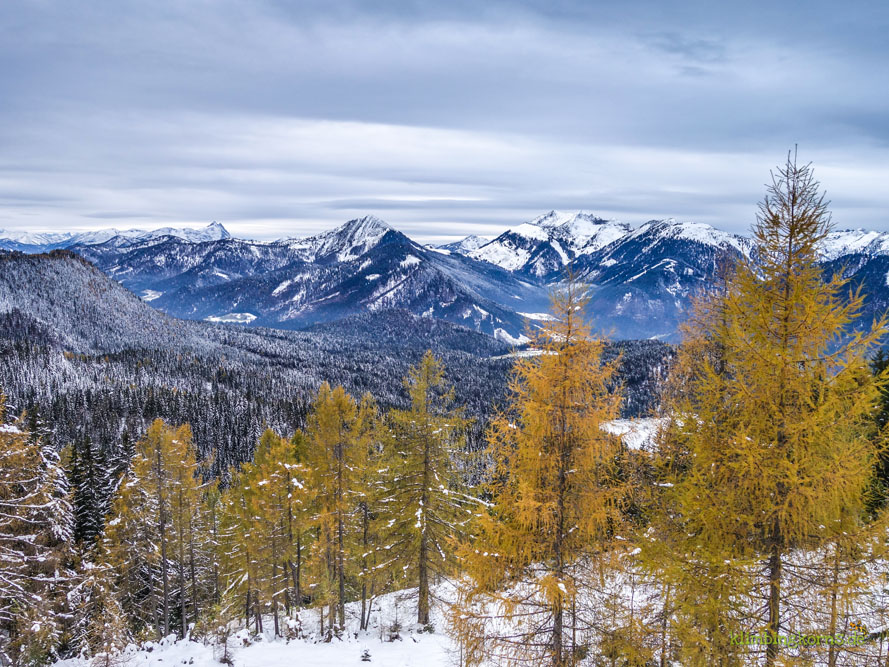 Larch trees and a view to the Bavarian Alps

The Kufsteiner Haus in Pendling and Kala Alm are perhaps one of the most frequented mountain huts in Thiersee, Tirol – Austria, be it summer or winter. With a little over an hour from Munich, it was a quick, sunny and exciting mountain rendezvous for the day. Promising mountain cuisine and a speedy sled way back to the car made us quickly hit the road.

The last steep serpentine quickly ended as we arrived at the parking lot right by Gasthof Schneeberg. Hubby jumped out of the car, to pay the parking fee. The lot was empty. I looked out of the window to only to realise that my parking was not align. Even though no crowds were expected to come for the day, I thought it would be a good idea to do this right. You never know when you’re in Austria. So the engine roared again  and I popped in the reverse gear when suddenly I heard from a far

I hit the brakes. His bags and stuff were all over the place. The fate of the expensive sunglasses laid just inches away from my rear tyres.  Puuuh, that was close!

We passed by the Gasthof, eyeing the menu that was standing outside carefully to see if there would be something to churn our appetites on the way back. Nada. Closed. We carried on.

The trial led us over wide icy forest tracks with street lamps. It had snowed plenty the last few days. Enough  snow to hit the slopes for back country skiing, and perfect conditions for snow sledding,  or “rodeln” in german. However, the season has not even started.  It was early November and we found ourselves in winter wonderland. We were excited to make the first winter hike together this season. Season in or not it was 100% Winter that day. 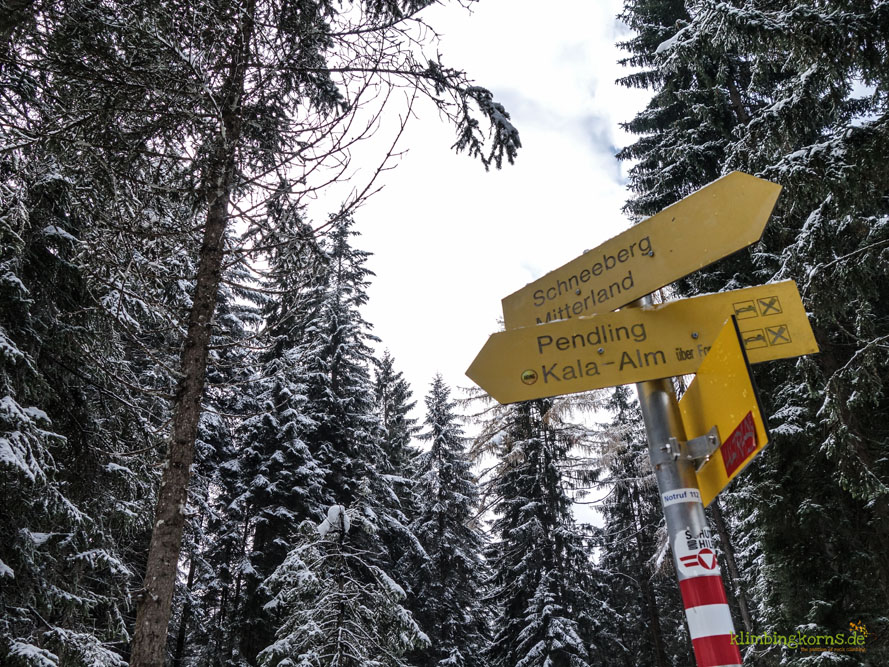 This way to the Pendling.

We arrived quickly at the first junction.  To the right led to Kala-Alm, but we chose left to Pendling.   A round trip was more appealing for us instead of going up and down the same way. The trees were white with snow, frost from the morning made everything beautiful.  The wide track splitted again in two, as we chose once more the narrow trial left way up.

This trial, had been walked flat over the weekend making it easy for us to snow hike along the steep serpentine up.

The Larches were still holding its leaves. Such a contrast to the fallen snow. A field of yellow needles surround the larches amongst  whitish flakes makes it stand out from the conifers that surround the tree. To my left, the mountain tops started to appear. Brunnstein, Große Triathen… it was then clear that we missed blue skies just by a few hours. The storm that was to come in the afternoon was catching up, and grey feathery clouds started coming in. And we were predestined to a day without sun. Daang! 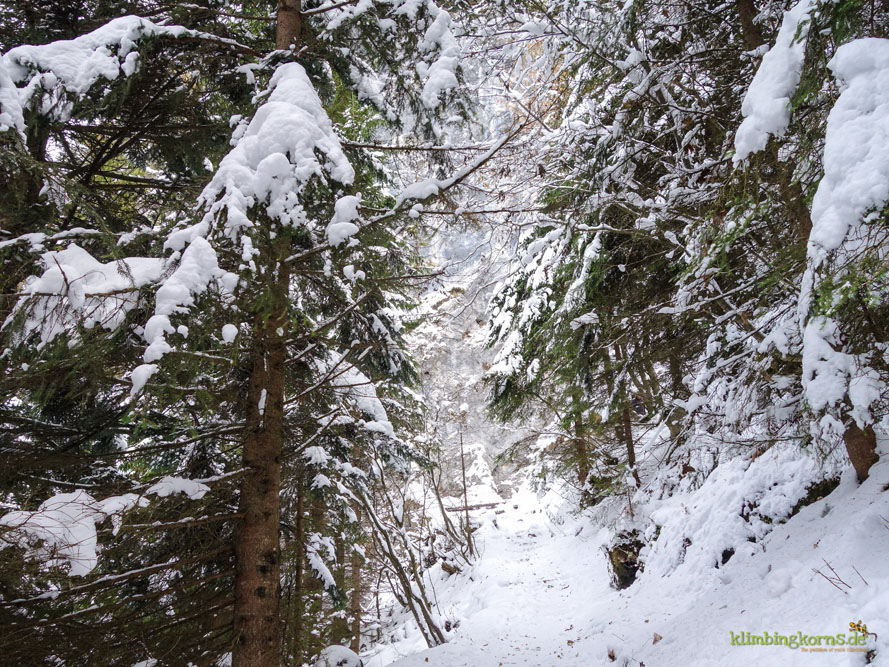 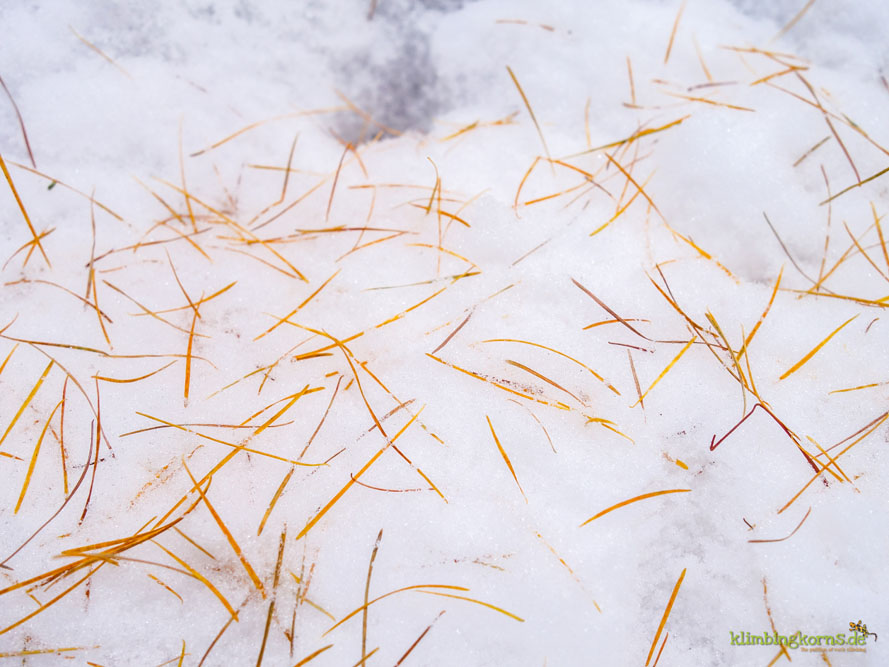 Needles of the Larch

We quickly reached the top and had a wonderful panorama to the Kaiser mountains. 2 summit crosses made it hard to decide which to monkey around, so we took both in.  As if a reward, the sun came out for a few moments, before disappearing behind those clouds. I stood before the Kaiser, Face-to-face, feeling not appropriately dressed for His Royal Highness. But I was sure he would understand that I wasn’t going to appear in my stunning evening gown. We stood there silently looking at each other. He had to see me just in my boots and a funny pink top. FaceTime. Sometimes, it’s better to say nothing to the Emperor. 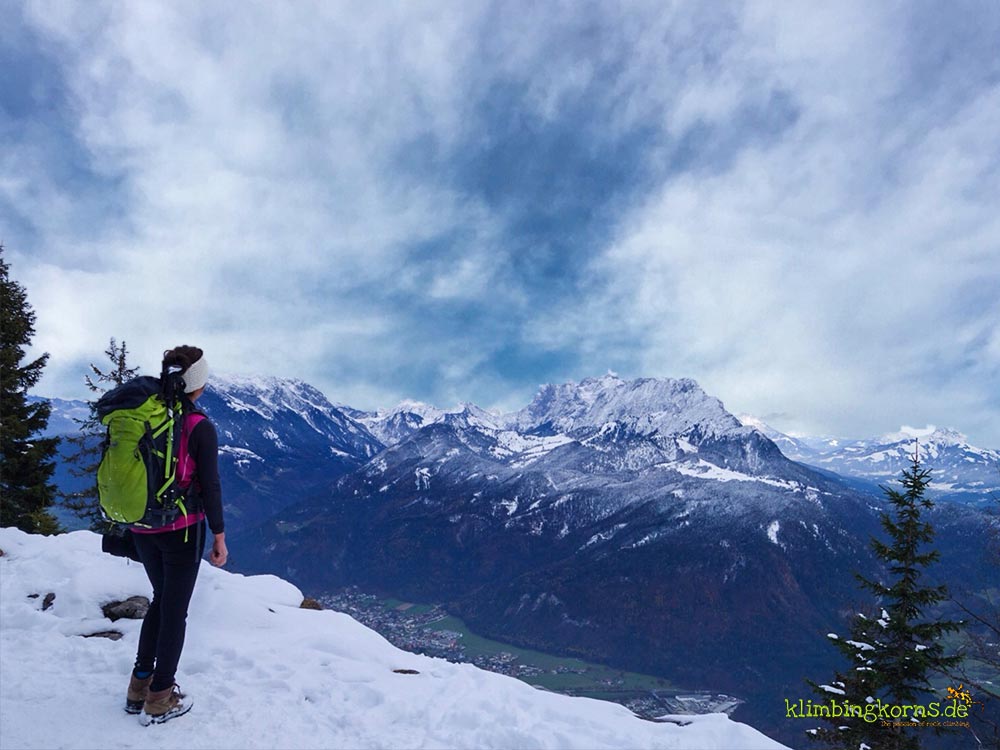 A few steps down on the other side made it clear that the Kufsteiner Haus had its doors tightly closed for the winter. I peeked through the window and saw how cosy it was inside. My stomach began to rumble. I gobbled down a handful of chocolate coated raisins. My sugar was running low and I was suddenly famish. On the other side, the Bruno Bar (in memoir of Bruno the Bear – the only bear that crossed the borders to Bavaria) stood alone, not filled with a queue, but instead filled with all the benches and tables from summer.

We quickly changed our wet garments to dry ones and I popped a few  cookies into the mouth. My fingers trembling. Somehow, I forgot how quickly the body could cool off when you’re all sweaty and wet. Were those doors really closed shut? Once again I tried to open the main door in disbelief. Another handful of chocolate raisins landed in my mouth. 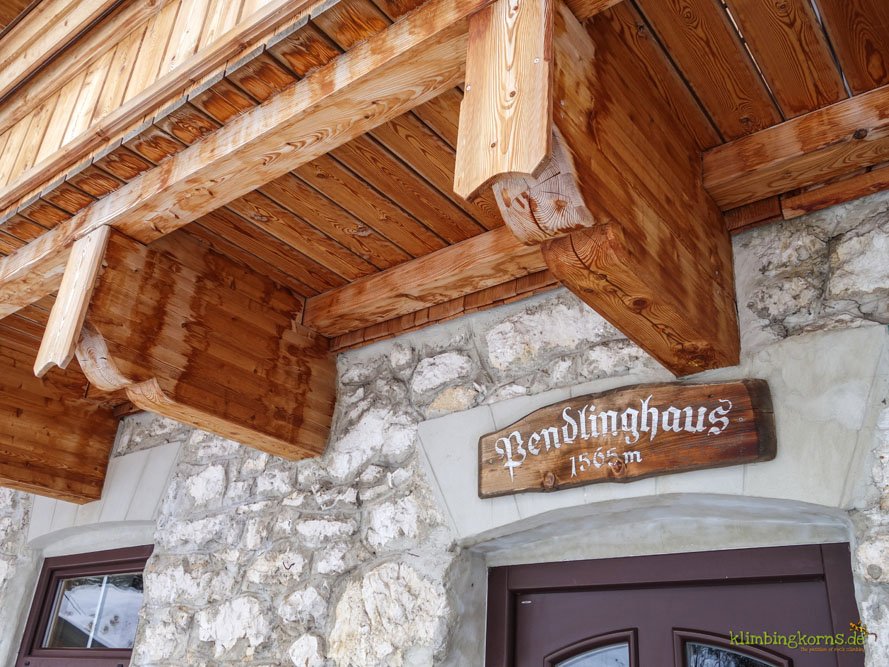 Zua ist! Closed over the winter 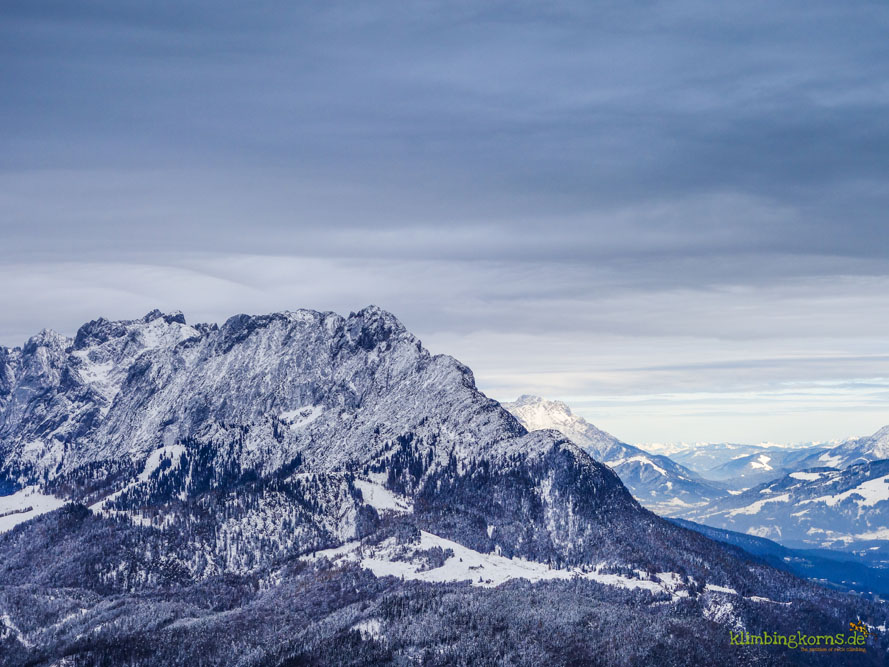 We carried on, taking now the other road back to the upper junction that intersects to the Kala Alm. Along the way, I realised that if the sun would’ve shone, we would’ve had wonderful sunshine all the way till Kala Alm. But luck and the sun was else where.

Show down at Kala Alm

We finally reached Kala Alm, only to find that everyone was on vacation, agian. Aaaaargh! 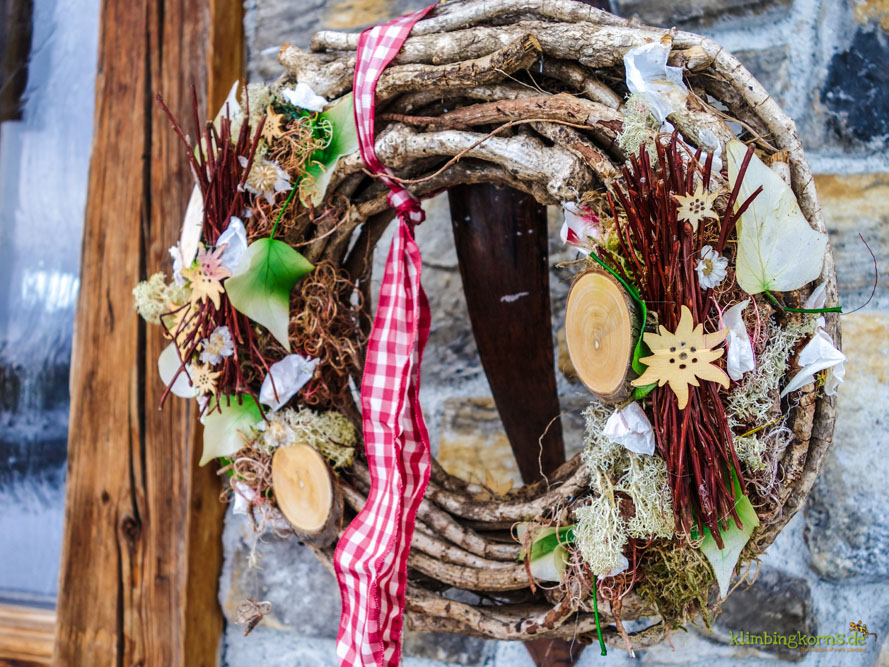 No winter fun, no chances of breaking a leg, or getting a bruise on your precious behind, no getting the hairdo all messed. No fun. I was deeply disappointed.

We took a few moments to look around. I imagined how it would be like if the sun was shining, the tables and benches all set in the snow and the smell of a good Schweinsbraten, Schnitzel or Kässpatz would tickle my nose. A beer in my hand.

Pooooof!
A ball of snow landed on my head. I turned around, only to find another landing on my face! A snow ball fight of the century began. After what felt like a hundred balls, I was totally exhausted. Almost too old for this!

One last look off the terrace took off to Roß & Buchstein, Rotwand, Bergsturz (huh? where???), Rabenstein, etc.  I took a deep breath and we continued our way down, leaving Kala-Alm’s snow garden a little more messed up than before. The snow was going to melt anyways.

The return was unspectacular and steep. With each curve we walked, we wished we would’ve brought our own sled along. It would’ve been so good.

But Christmas is near, and my wish list is now richer of a sled or fun carvers. Will Santa hear this?

So even though many of the soaring expectations we had packed in our hopes didn’t happen that day (no sun, no sled, no cuisine and “überhaupts net zunftig”) I was lucky to have a personal FaceTime audience with the Emperor aka Kaiser. I was outdoors and about and we spent some quality time together talking about the nice things we usually don’t always find time for. Often, it’s the little things that saves the day. Often, we need such days to remind us – hey, we need to do it this way more often.

We will definitely be back, with the next snowfall and shining sun. By then the hut should be opened again and perhaps, Santa has heard my call. 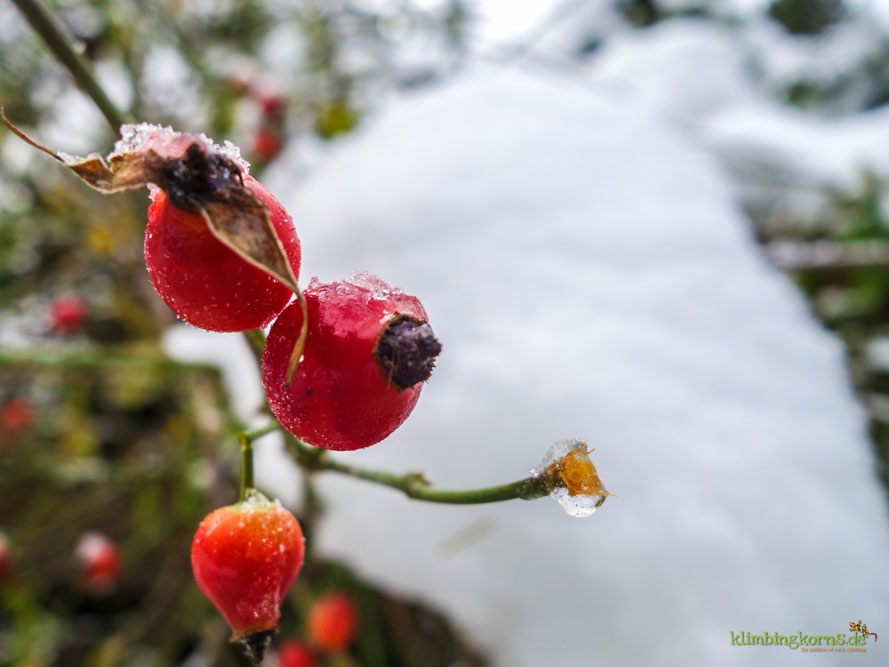 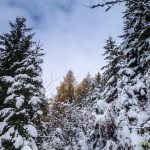 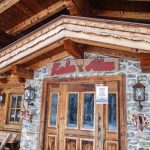 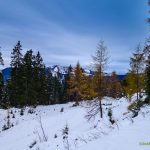 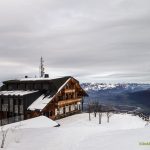 Imagine when the sun shone, a summerly temperature and the terrace full of tables and benches. Hach, the view! 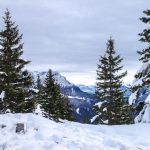 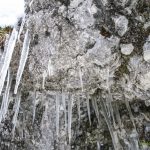 Ice pops from the rocks 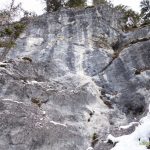 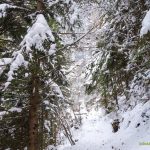 General Information of the tour:

To download the track on your gps device, choose “GPX” in the drop down and hit the OK button.

* Times may differ depending on your condition.