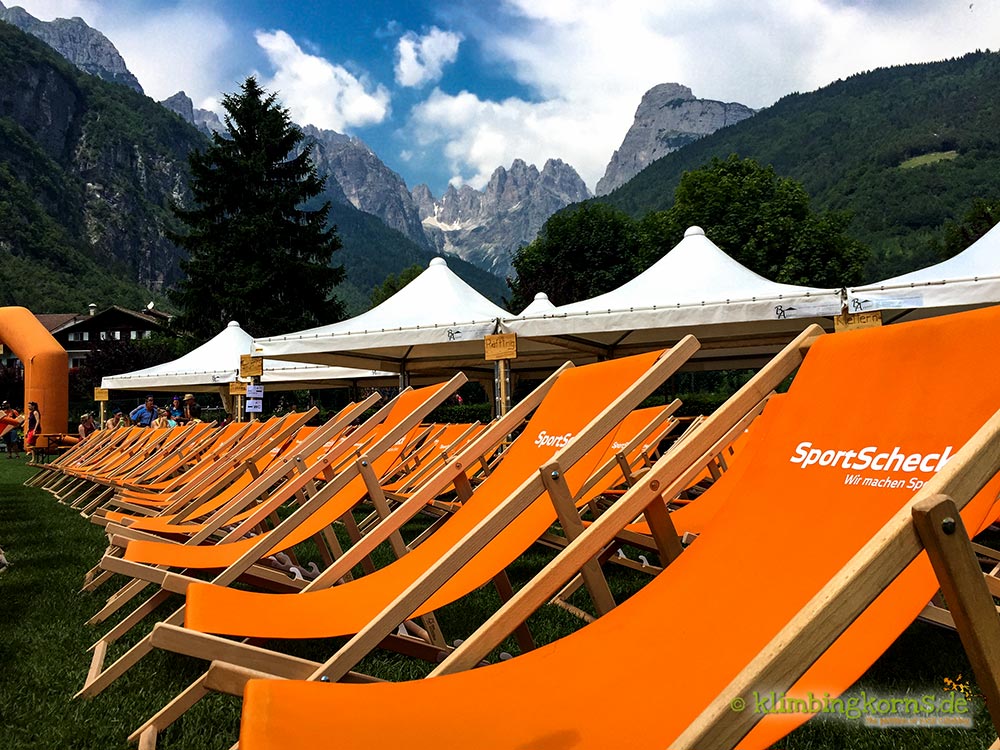 I was fortunate to be able to spend another active long weekend at Lago di Molveno, organized from SportScheck in the beginning of July. It was the 5th OutdoorTestival held in this awesome location. For the first time, they moved the dates to early July this year and so it was perhaps the best time for all those who love the water. Unlike the event last year we had the blessings of the Omega block over us and for some days, temperatures soared as high as to 39°C in the valleys.

No wonder all water activities were so much desired by the participants.

20 manufacturers like La Sportiva, Petzl, Adiddas, The North Face, Shimano, Scott, Schöffel, etc were showing off new test materials which the participants could try and use during their tour. Equipment for boats, SUPs, Via-Ferratas, Climbing, MTB, Mountain Boots, and functional underwear were available, the 3 days were not enough to test them all. This event is so unique that you can not only test the products, but also try different kinds of sport all in a few days. For those who have always wondered but never dared to try, this would be the perfect event to go to. Nevertheless, I was surprised to find many familiar faces within the participants. Interviewing a few of them gave me the idea that they had so much fun, they had to come again. But yes, I had the same opinion too, and was only too happy when I received the invitation.

Special guests this year were Peter Schlickenrieder, Stefan Glowazc, Thomas Tauporn aka “Shorty” gave us an insight of how professionals think and do their sport. 9 other bloggers including myself,  had the chance to give them a short interview after being served with a tray of delicious Trentino speciality. “Shorty” showed us in one of the evenings how to speed climb a 6m plastic wall within 3 seconds. An amazing time to practically fly up the wall. Luckily, I missed the first round and had excuses in the pocket when asked why I didn’t join the competition as well. (everyone would’ve fallen to sleep, if I would’ve made an attempt to speed climb) Many girls and boys participated in the contest and received attractive prizes after their performance. 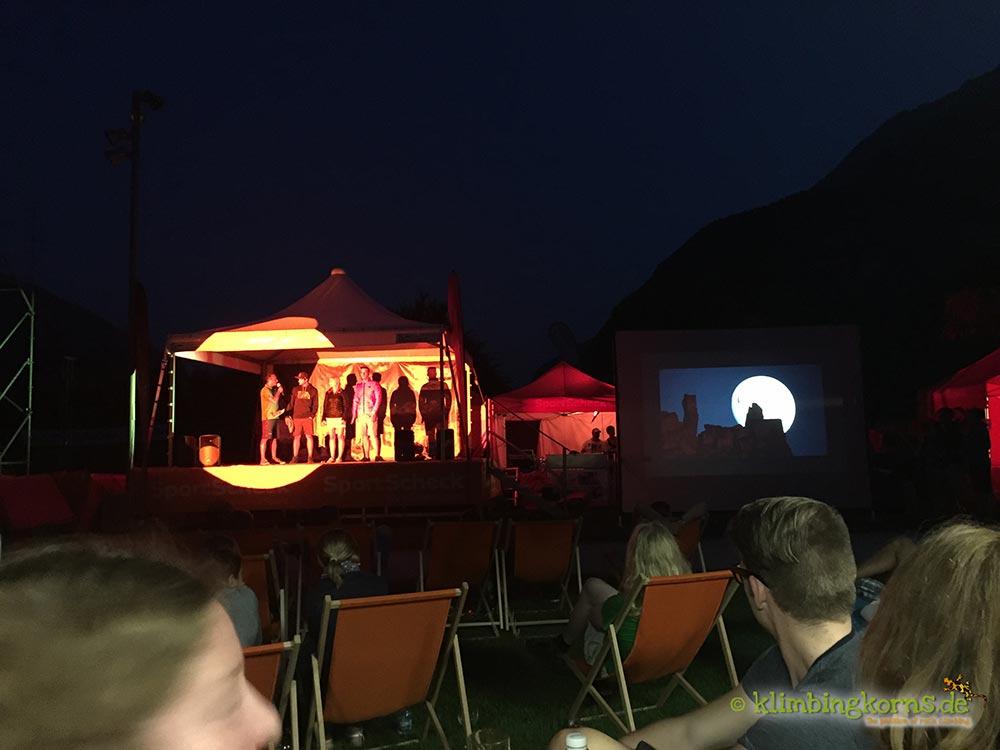 The weather didn’t always play along in the evenings. Thunderstorms and wind challenged the organizers to gather all their tents together and prevent it from flying away to the nearby lake. In one of the days, they practically gave up wearing their rain jackets and jumped in the rain. That was when the prettiest rainbow appeared and everybody ran out to capture this on their camera. The spirits were never damp. It was always optimistic and fun. 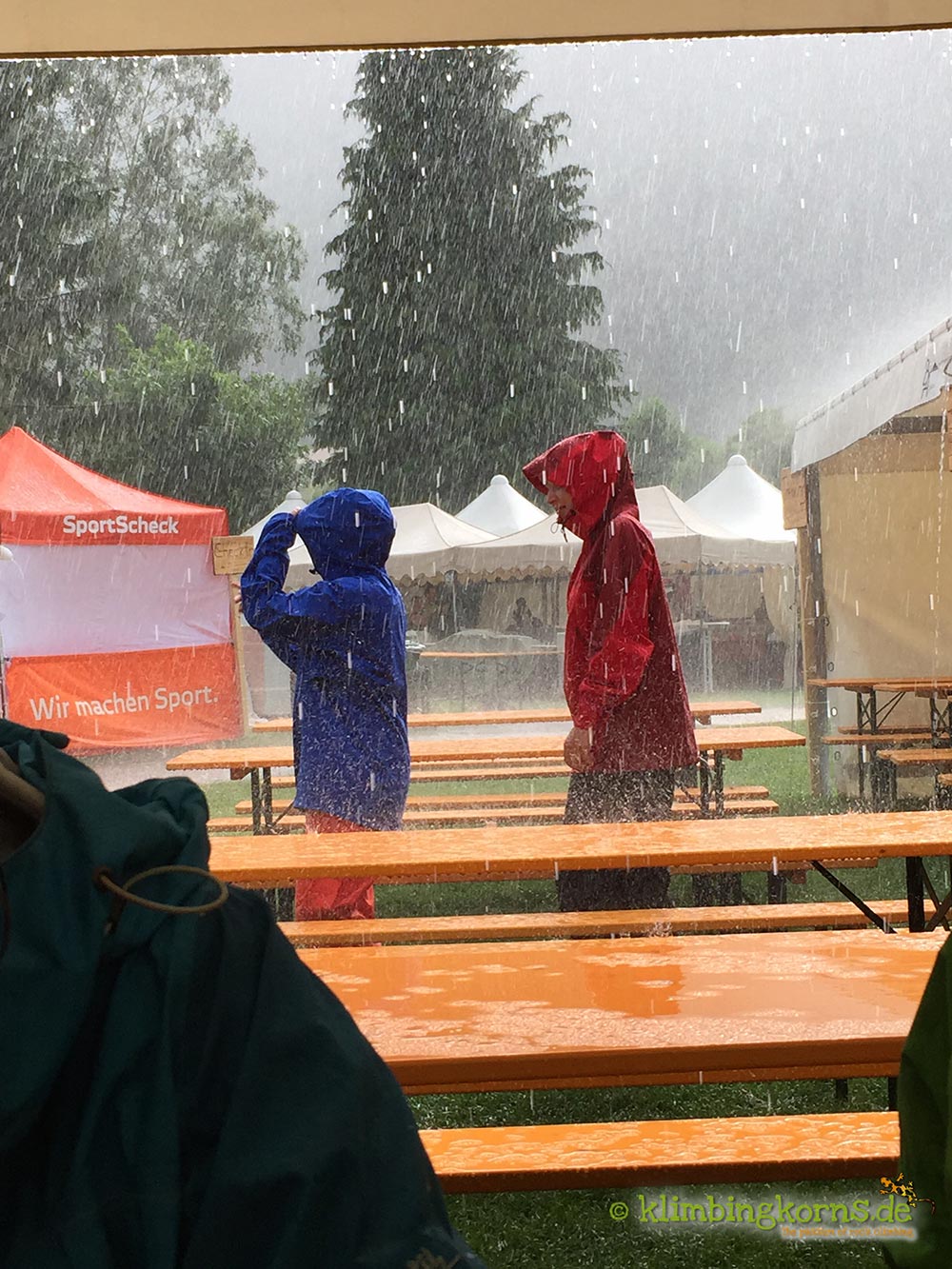 My first day took me out on a nightly hike to the Rifugio Casina Bruniol at 1200 m high. There were about more than 50 participants that night, and the walk started around 7p.m after a refreshing appetizer at the Petzl stand. A 40 min. walk together with Sonya from Sochyontour by day light brings you directly to the Rifugio, which serves typical and local specialities from Trento. I never quite believed that we would all fit into that small little hut.  By the time we finished our food, the guides were ready to pack up and leave for the valley again too. Which was quite soon. I lost count of the guides that came along. There were at least 5 of them there, herding us all up and down the mountain. It was a particularly pretty sight when the night finally came in and everyone had to switch on their headlamps. The pathways were lighted up and I tried to make a proper picture to capture the moment, but my camera had problems focussing on th the object.Nevertheless, we came down in time to catch the last minutes of a firework session taking place directly on the beaches of Lago di Molveno. 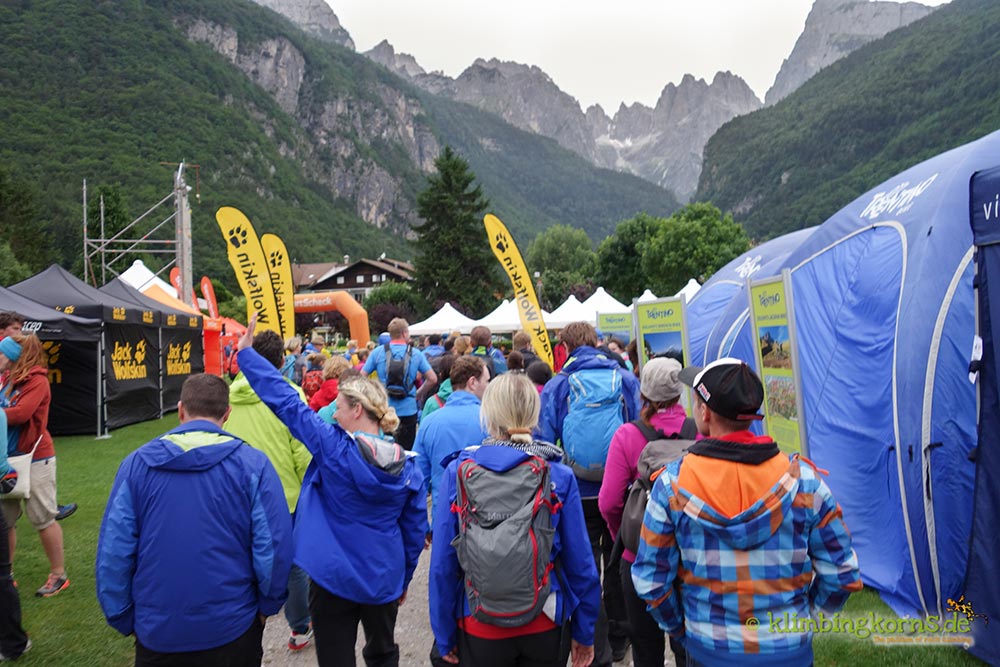 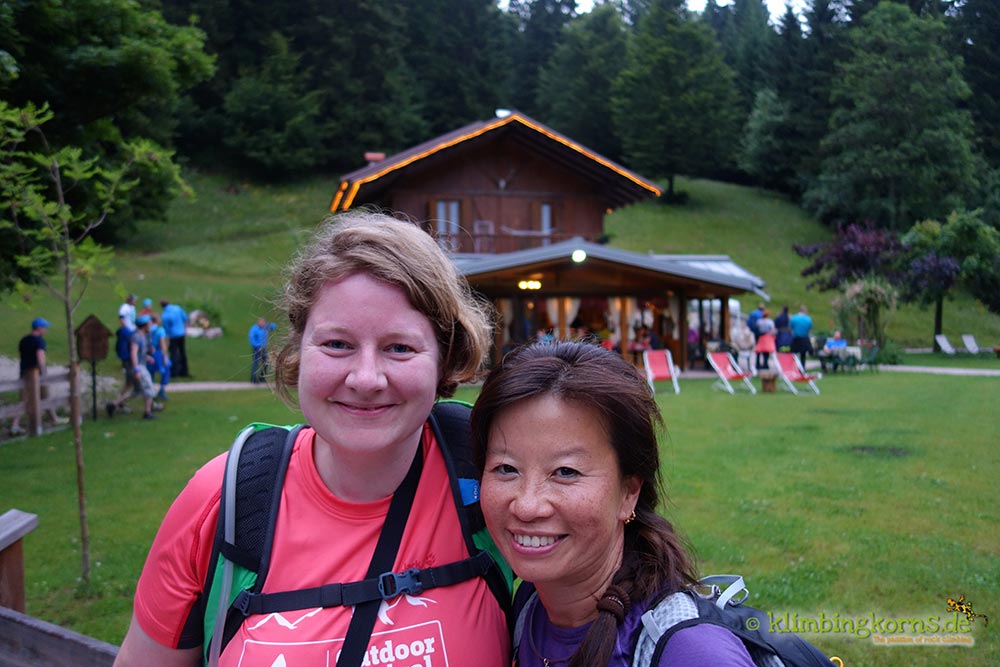 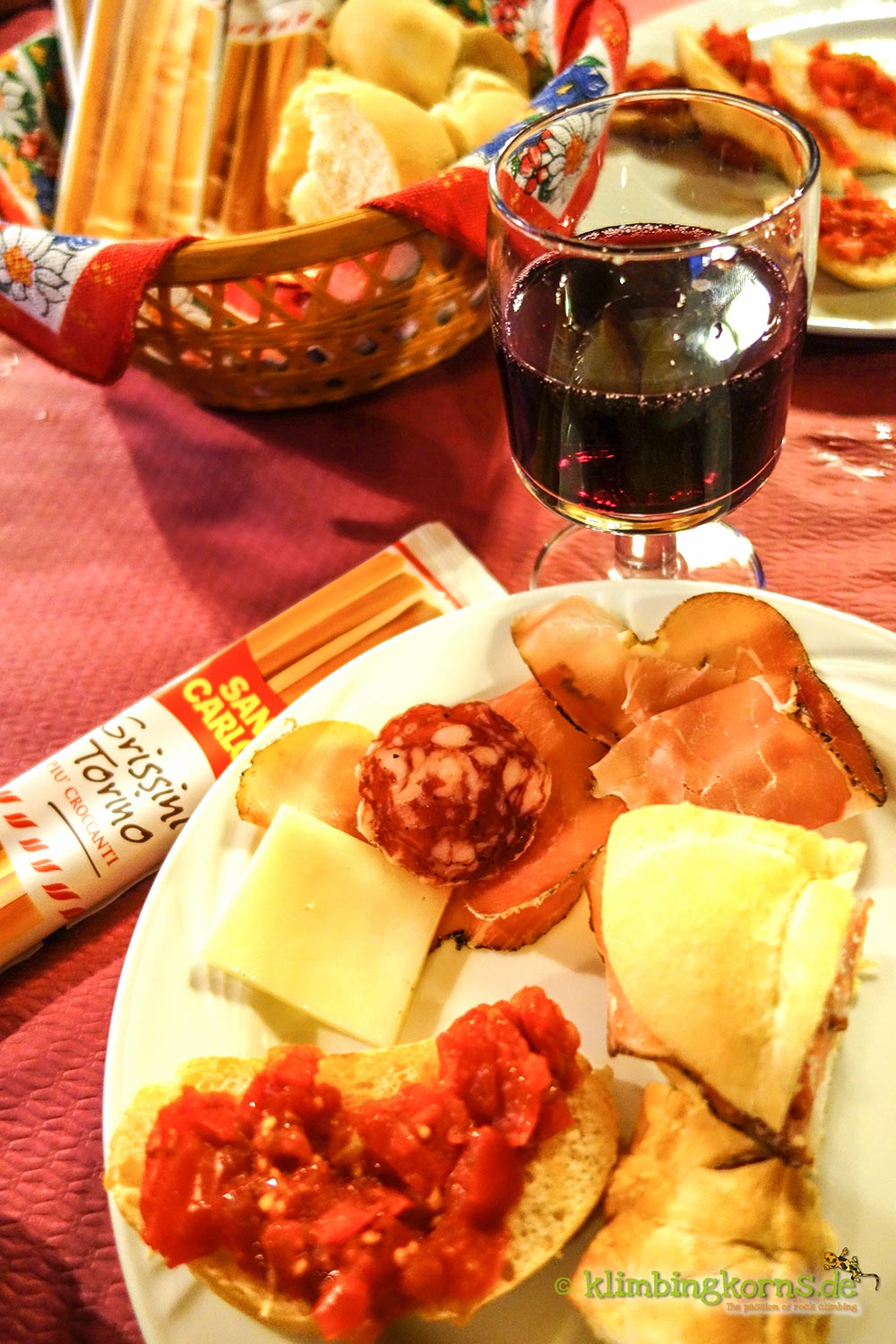 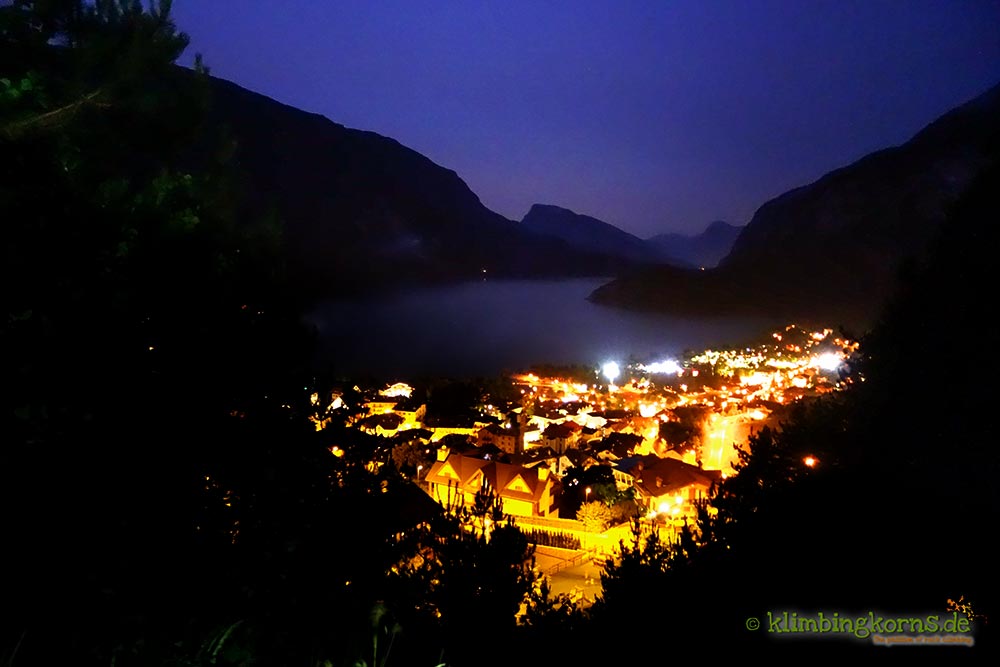 I knew it was a crazy idea to book myself into a Via-Ferrata tour in the Sarca Valley in this heat. But even knowing that it was going to be 39°C during the day and a southern facing wall didn’t stop me from changing my schedule. And so, after a hearty breakfast, I made my way to the group. We were huddled together in an aircon bus that took us in 40 mins to Pietramurata, just right where the newer Via Ferrata “Che Quevara” started. We all put on our gears as we approached the impressive looking massive (that all sport climbers wouldn’t even take a second look) in Sarca and ascended the hill in 30 mins to the start of the Via Ferrata.The Guides Giovanni aka “Jo” and Francesco briefed us on what we should be doing and tied us all in his rope in two groups, making sure we wouldn’t run off, just in case we decided otherwise. I didn’t have much luck when I asked to be left untied. “There is a passage where it is steep and spacy. You will need it” was the assurance that I received. The Via-Ferrata was easy for me, as a sports climber, but there were some who were absolute beginners and had problems at the steepest crux of the passage where neither steps nor holds can be found. It meant pulling yourself up with the steel rope and putting your foot on the polished walls. Nevertheless, we finished everything after 3 hours being baked in the sun. My water ration went empty about the half way through the Tour and we had only the chance to drink lots at the next bar in town. And yes, just incase someone forgets, I’ll suppose to be doing the Matterhorn together with Jo next year, so he promised ;)

Of course the nicest part of the tour was the visit to the winery in Toblino. Nothing new for me, as this was a Cantina I knew well in that area. Their Vino Santo and the white wines with a Nociolo finish were one of my favourites. 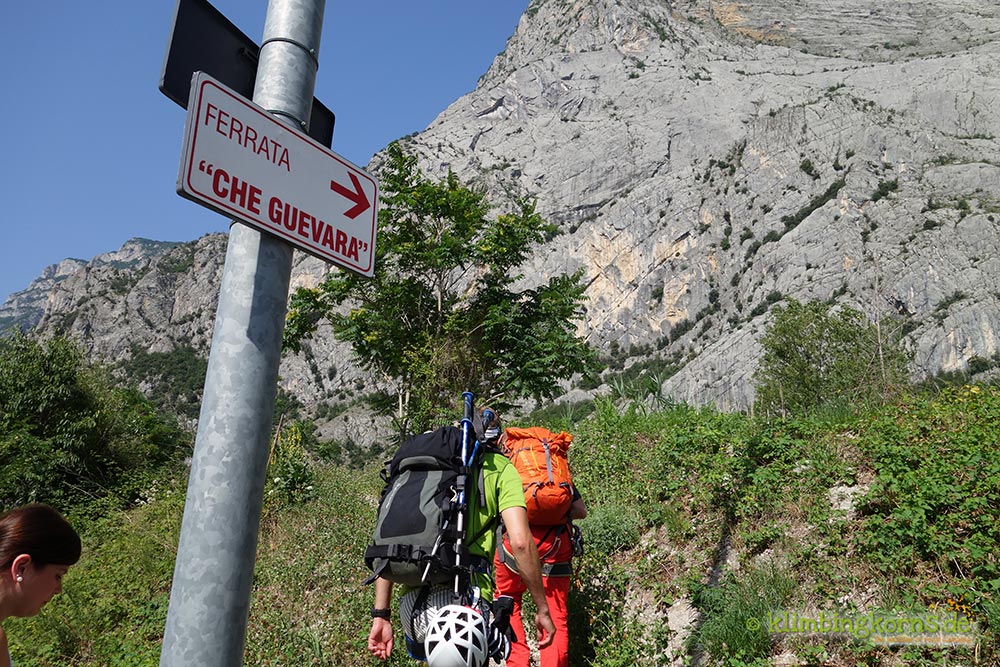 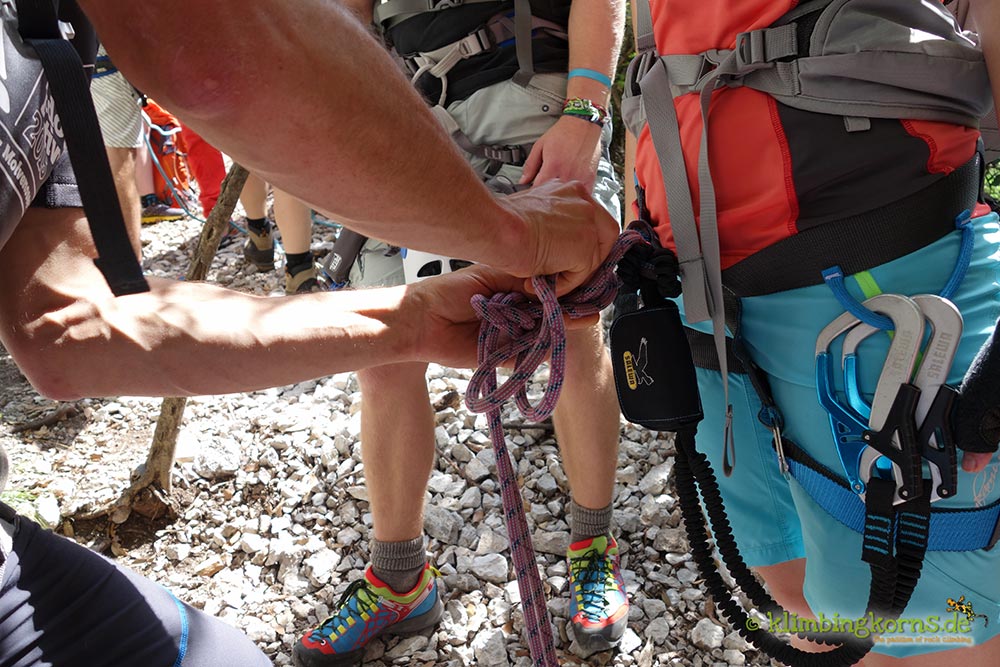 “The rope must be stretched!” I finally paid attention to what knot was used to tie each participent. The Bulin knot. So, no more excuses for forgetting 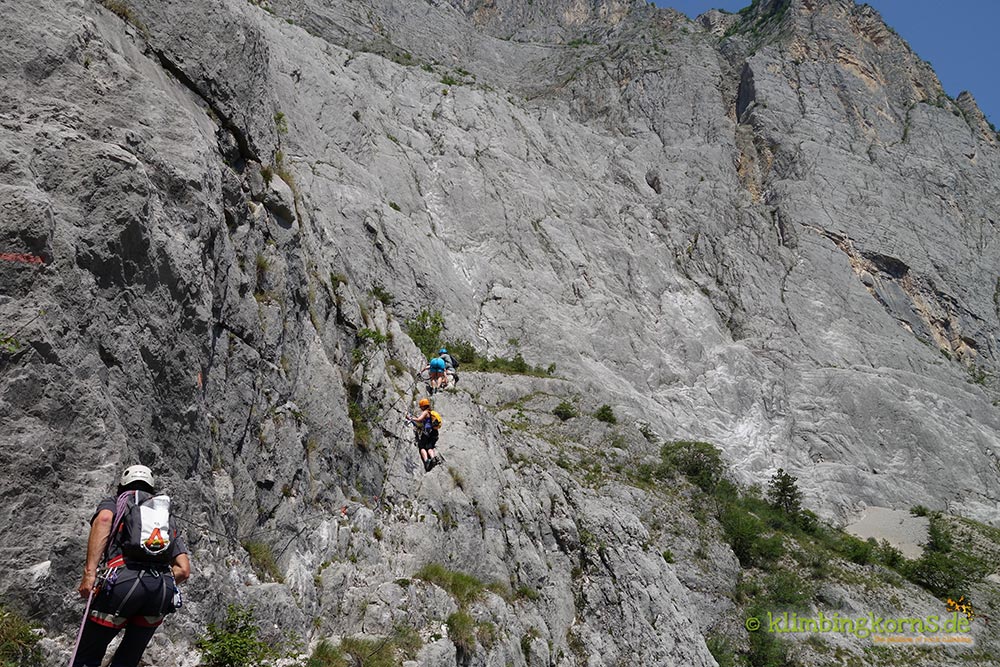 It was hot. Really hot. 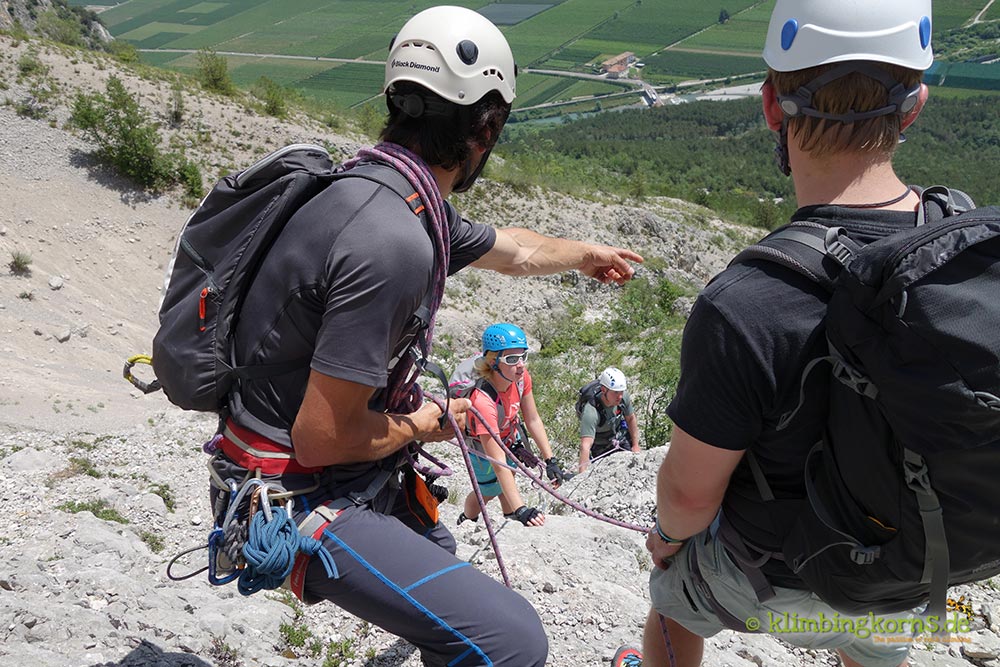 “Take the ridge and descend from there!” shouted out our Guide. All 5 of us layed our lives in his hands 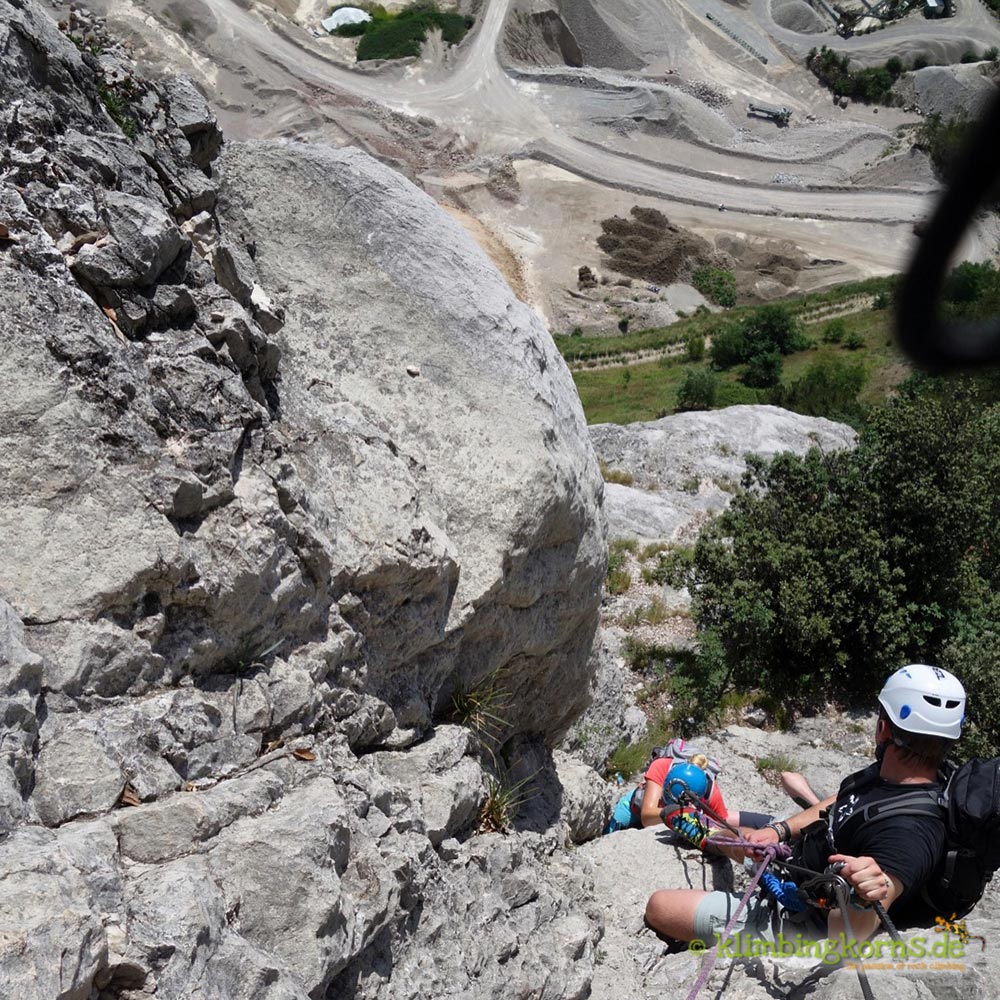 One of the crux passage.

Last year’s Tour to the Brenta left such an impact on me, I knew I had to do it again this year. The highlight Tour I had been hoping for wasn’t planed to happen for me. I had been on the waiting list to be able to get my feet on the Brenta to do the Via Ferrata Brentina – but it seemed that nobody was willing to give up that tour for a more cooling option in the water. DANG.

And so, I took on the tour which I had booked, something I knew I wasn’t going to kill myself on the last day of the Testival. Sports climbing! Cristiano, whom I have known from the last Testival,  took us all to Spormaggiore, a short drive up the hill in the direction of Cavadego. It was a small crag with a number of easy but yet technical, slabby routes. The good news was, the crag was completely in the shade and it was not too hot to climb. We were an awesome group of 5, all experienced and all with a mind for climbing. It was a good constellation and we had some real climbers fun there. Cristiano gave us always good tips on how to move and what to do, and I appreciate his golden patience with all of us. Somewhere around midday, the sun started coming in and we opted to catch our bus back to camp. Back at the camp, you had the feeling slowly that the event was coming to an end, the manufacturers were slowly dismantling their stall and was waiting for the last participants to return from their tour and return the gear. Another Testival comes to an end! 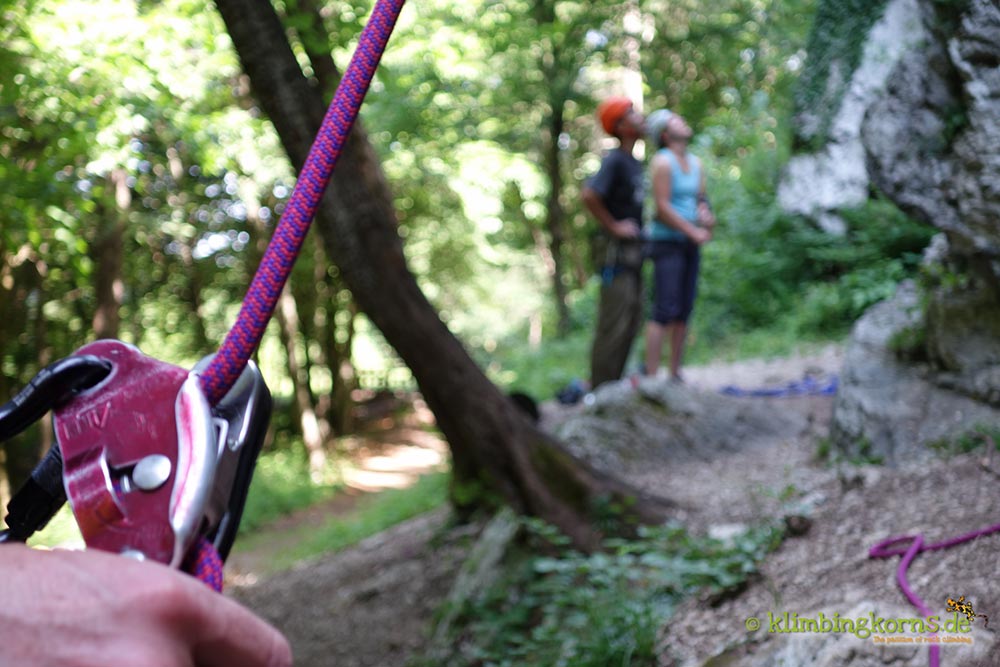 cool and shady in the morning. This crag has technical, slabby routes perfect to practise your footage. 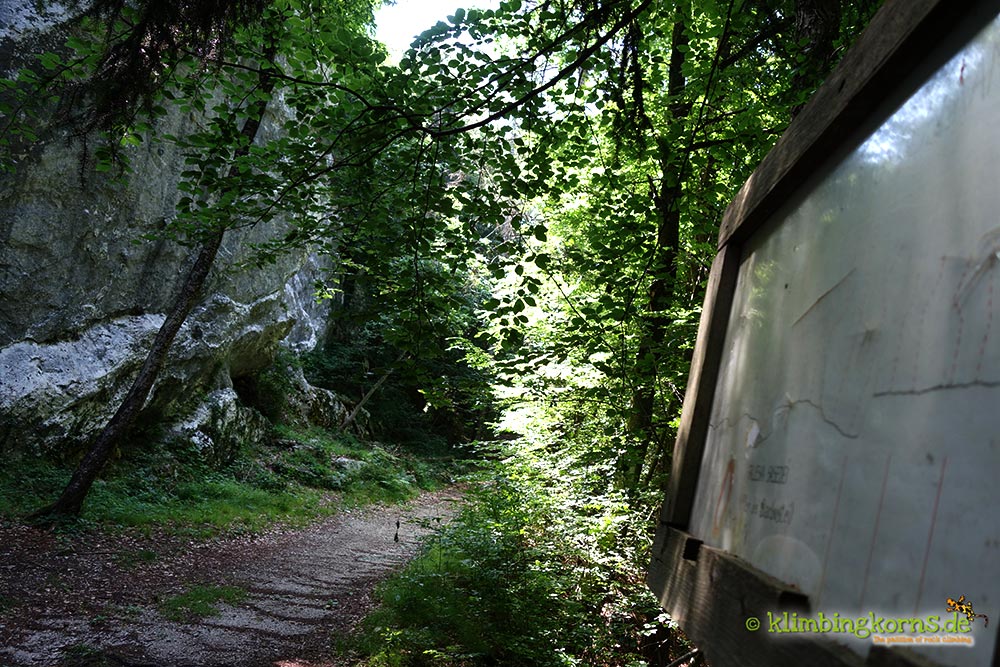 The other side of the crag, with artificial holds in some of the routes

What could be better:

Generally, it was an awesome trip and a very, very cool location. I could’ve been doing more activities this time round, but it was just as good that I didn’t due to the scorching heat wave. With all the maps in my hands now, I would be able to plan out my next individual trip to Brenta the next time round.

Read what the other Bloggers (in german) had to say: 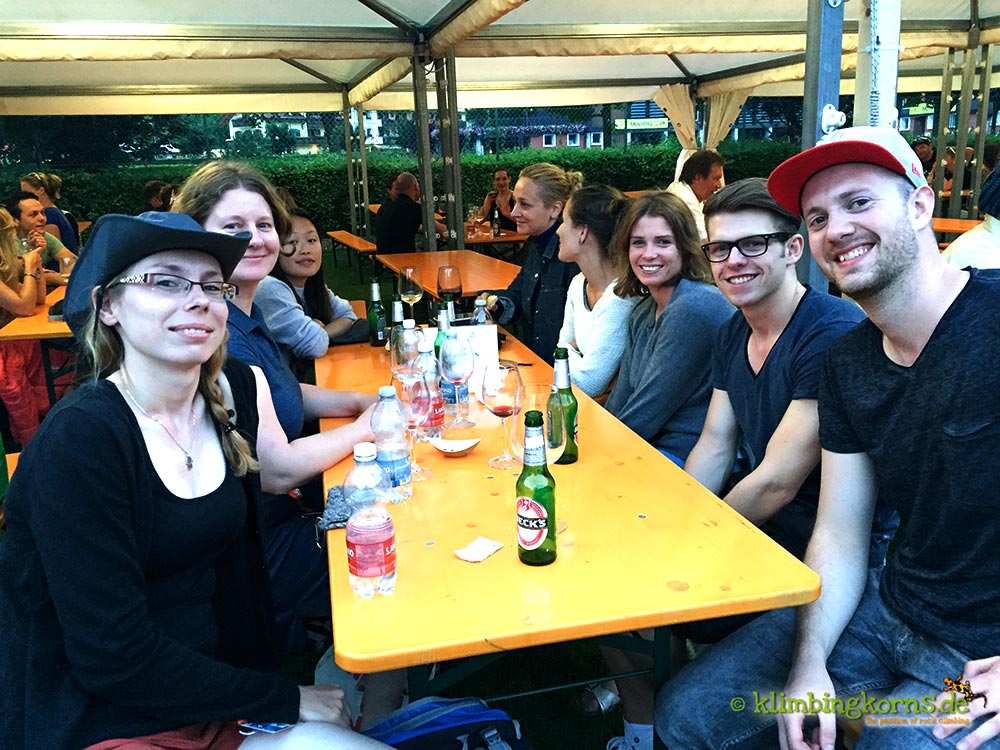 Many thanks to Karolin for the orga and invite, Sportscheck for making it possible and last but not least, the warm hospitality of the Trentino team during our stay. See you again someday!

Disclosure: The trip, hotel and guided tours were sponsered by SportScheck. All thoughts and opinions are my own.