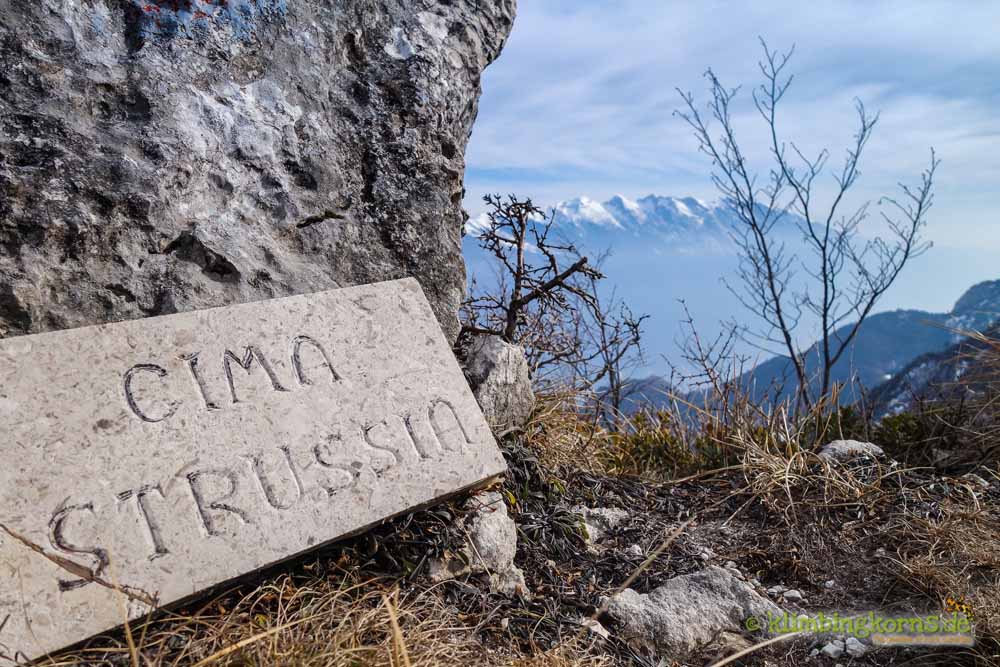 Our plans to climb was ruined by the weather forecast that promised unlimited sunshine that day. Clouds covered the sky. 6 °s Celsius. Not inviting. We needed an alternative so that the day would not go to waste. Carpe Diem. Rochetta Via-Ferrata or a hike? I whipped out the gps app and set it to show our position in the map on terrain modus. Half an hour later, we worked out something that sounded like a plan and drove to the direction of Val di Ledro. The goal was to cross the ridge between Cima Strussia and Passo Guil then return on the other side of the valley to the car.

There must be more than just this..

We parked the car at the parking lot on the left right after the first tunnel, walked back 50 m, crossed the bridge and found shortly after the access to the trial. The trial took us up in steep serpentine for about 300 hm until we reached the first crossroad. Through the leafless branches we could see Lake Garda shimmering through. We made a short break at Bocca da Lé which was one of the first trenches that came with a sheltered BBQ-pitch, bench and a table. From here, you could catch a good glimpse of the Lago. We discussed if we should make this a leisurely day – i.e. lay just there and not budging, or proceed. Looking at the watch, we knew, the round trip we had planned earlier was much too big to accomplish at this time. We were too late. The signs gave us a clue, there was another 3.5 hours to  Passo Guil It was 2 pm, we had no headlamps with us and I had already finished off  all the cereal bars I brought along. Looking up at the summit, I kept thinking it can’t be another 1.5 hrs up . And I knew it could have better views.

Hey woman, pull up your socks! Lets put the gear in! 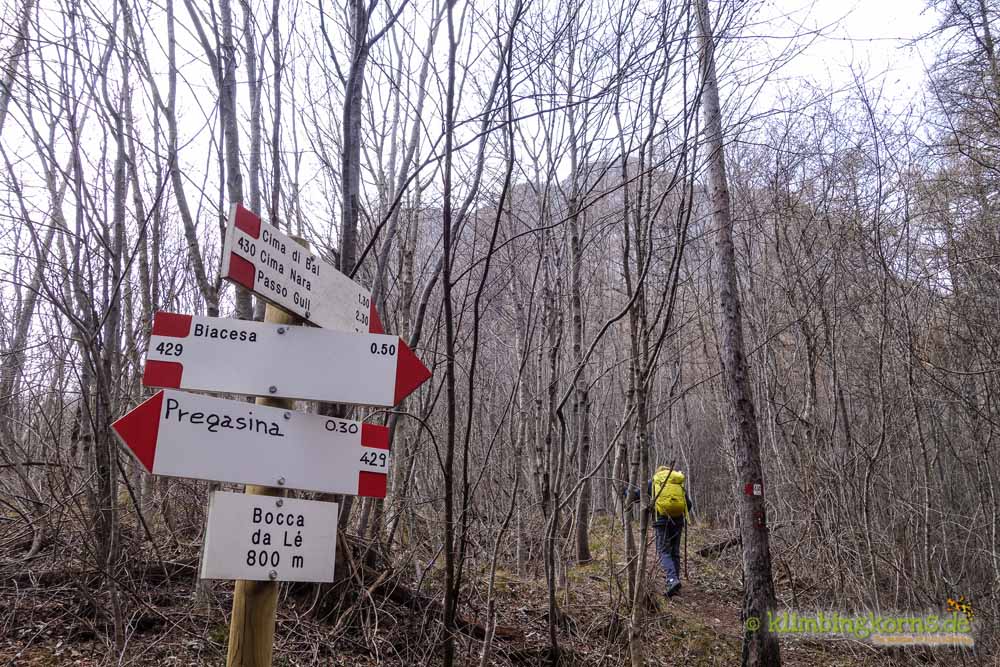 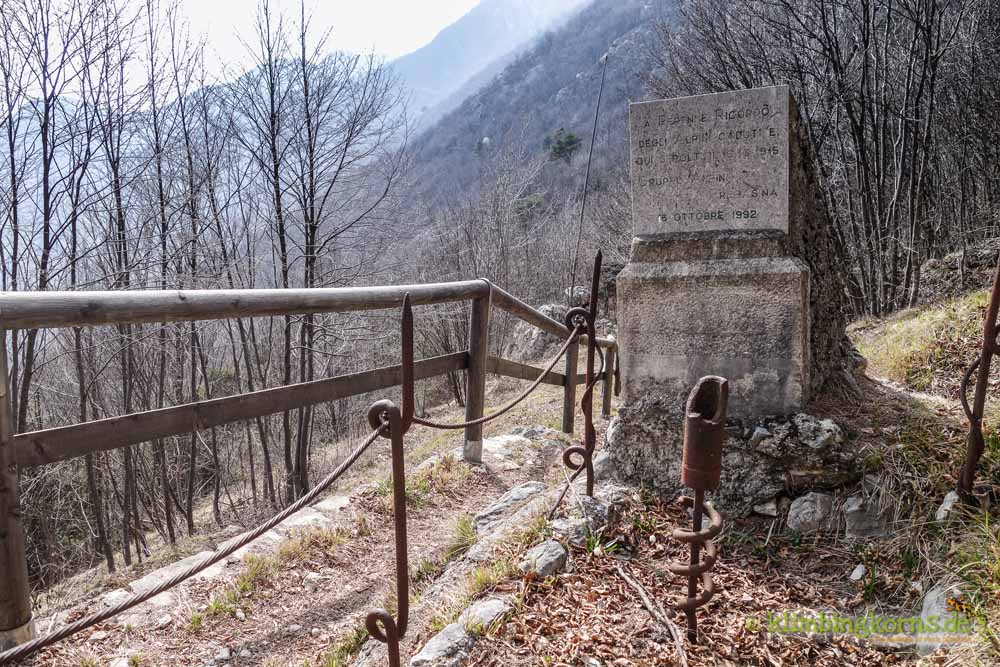 We carried on on the Sentiero 430. The path led us partly on the north side of the ridge. There were still remains of the last snow fall making the path slippery and icy. We then soon reached a sign that said: 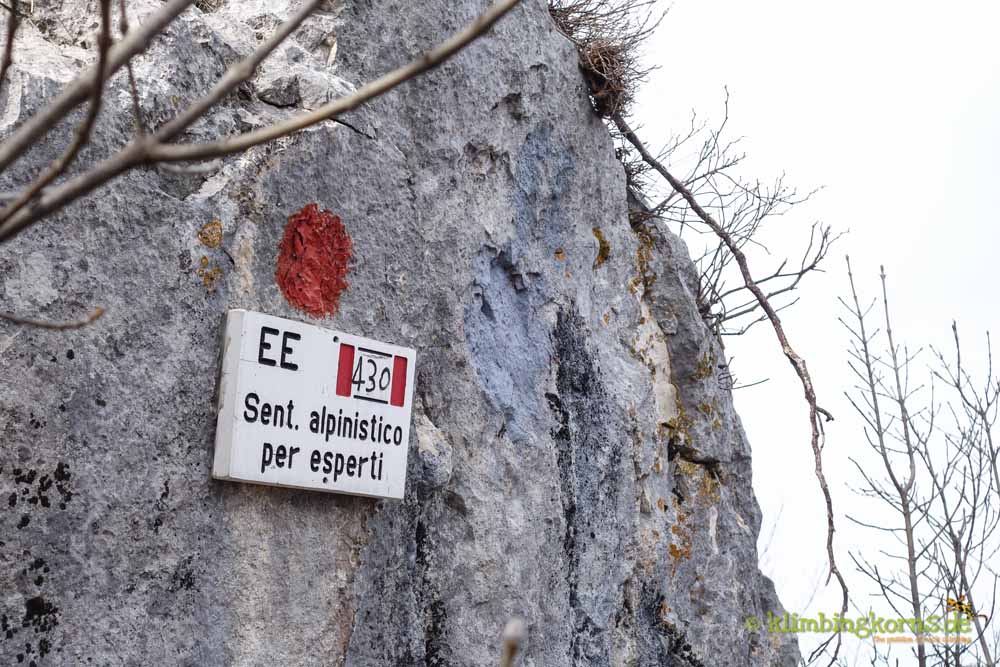 Sentiero Alpinismo per esperti. Yeah, sure… is there a dictionary for me?

I looked at the sign a long time and didn’t understand what “per esperti” meant. Was it like “express” or “expert”, maybe “the faster way up”? And why was this trial suddenly an alpine trial? Aren’t all trials alpine?  Brains lacking from oxygen and italian basics, lungs gasping for air, I continued. A few minutes later, I finally got the picture. Forget Google translate. The path started to get steeper. I used my hands to scramble up some of the steep rocky passages. There were plenty of rocks, roots, and air around me, and the path turned into a tiny trial where you had to balance yourself precisely between the roots and the trees. There was a ledge. I stop to turn around and see what was behind me. Plenty of air. The Lago started to look really impressive, but the grey clouds made it a depressive landscape. Shortly after, we passed by the ruins of the old trench that was once built during the first world war. There were a few artificial caves where they would have once positioned their artillery and canons. These places had always a bird’s eye view down into the valley. The caves were carefully hollowed to allow a comfortable entrance on the one side and a tiny crack on the other side to view and shoot. Impressive! And how clever they were to find such a position in the southern sunny side up (my thoughts were always about their comfort!) 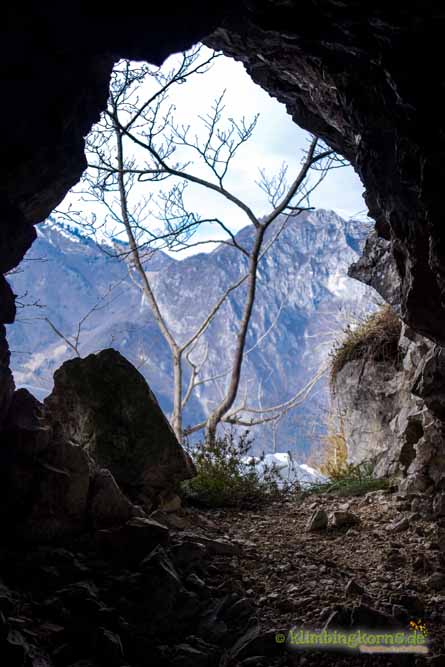 One of the trenches, and the view on to the other side of the valley 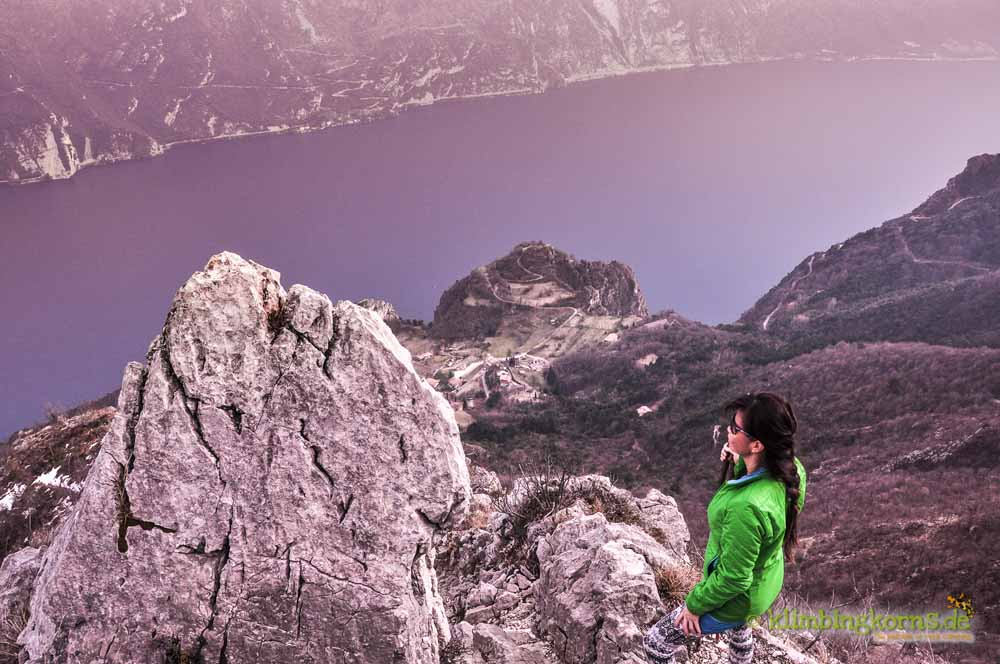 The path led us once again on the northern side of the ridge which was now permanently covered with snow. There were some passages where you really shouldnt’ t slip (damn, where were my crampons and trekking poles when I need them)  the slushy snow made us stomp our way carefully over to the other side. Slipping off now meant finding yourself at the bottom of the valley. My old shoe felt more like a felt tip house shoe on ice. My heartbeat was racing as I took each step carefully up, trying not to slip off the slope or sink mercilessly in the snow now still a little deep here and there. You didn’t know if the snow was going to hold you or if it was going to give way on the steep terrain. For a moment I felt like an orang utan slack lining the rope across the river. We worked our way right until the top. 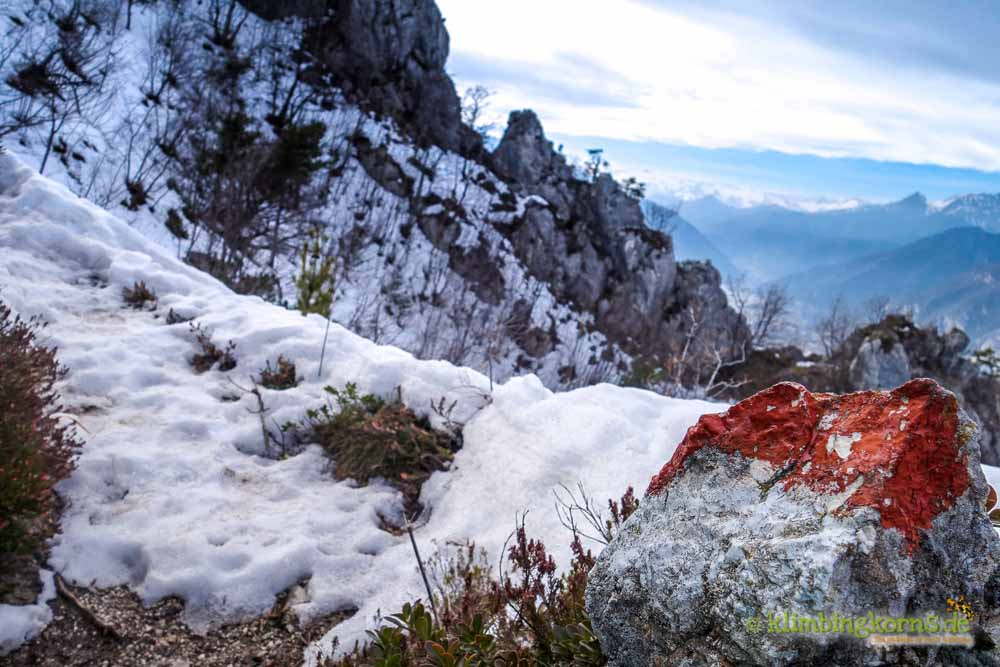 This was more like a motorway, comparing to the other snow-covered trials ahead of me

And then, we were suddenly there. Cima Strussia. There was no cross. Just a sign, that had fallen off from its original placement. It was no summit, but a peak.  I could see the whole upper stretch of Lago di Garda that melts into Riva, Monte Baldo on the opposite with glaring,snow-white tips: Behind me was a breathtaking view that took me deep into the valley of Lago di Ledro, and on the other side I could make out the valley of Lago di Tenno. I stood there in awe. We hadn’t expected the tour to be so spectacular on this cloudy, somewhat hazy day.

Someone was listening to us.

The heavens suddenly opened up and the sun rays brushed my goose pimpled skin. I smiled. The timing was right. We made it! A shot of happy adrenaline gushed into my bloodstream as we sat there to take it all in! 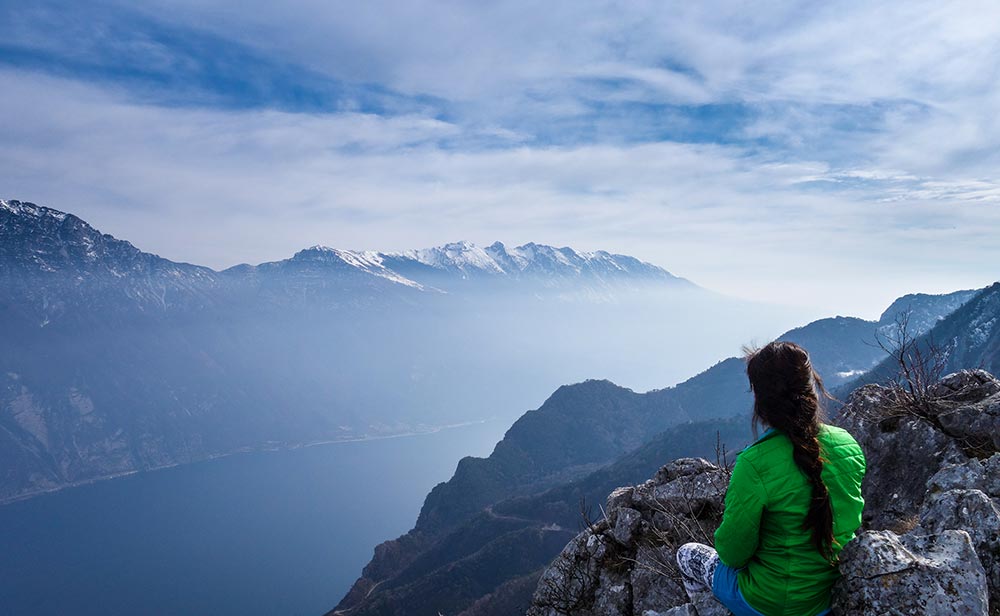 Watching over the Monte Baldo on the opposite 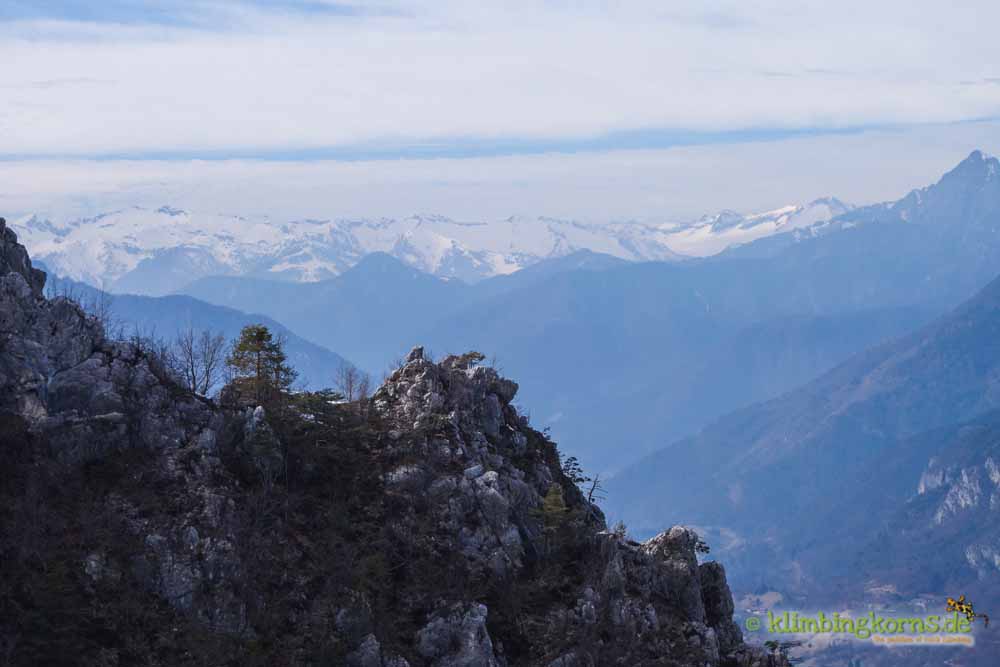 The Tenno Lake lies behind the peak and views into the Madonna di Campiglio & co. 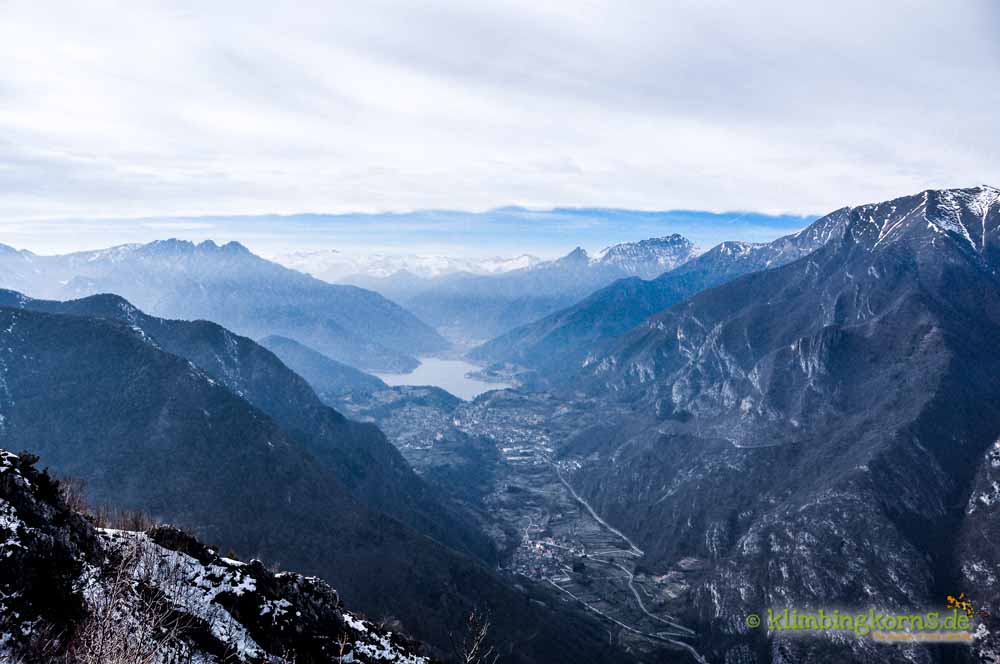 The ridge continues over Cima Bal, Cima Nora until Monte Guil but looking at the trial, it wouldn’t be done in 15 minutes. We now understood too why the sign says 3.5 hours to Passo Guil. The path was not always comfortable, you should be fright free from airy passages and comfortable walking a ridge, and then, there was snow. More snow than we expected.

A little disappointed to have to turn back at this point (because it just started to get fun), we returned the way we came and reached the valley some 2 hours later, just before it started to get awfully dark. The wind was chilly, 2 degrees. I was glad that we had chosen a proper accommodation and a hot shower was waiting for me.

Once again, it proved that it always pays to go, and not to let a few clouds and cold temperatures dampen your spirit. 780 hm in just 2.75 km. Steeper, than a usual stroll in the mountains. A neat walk for those who find the usual hike boring.  I will be back next time to make the 6.5 hours round trip! 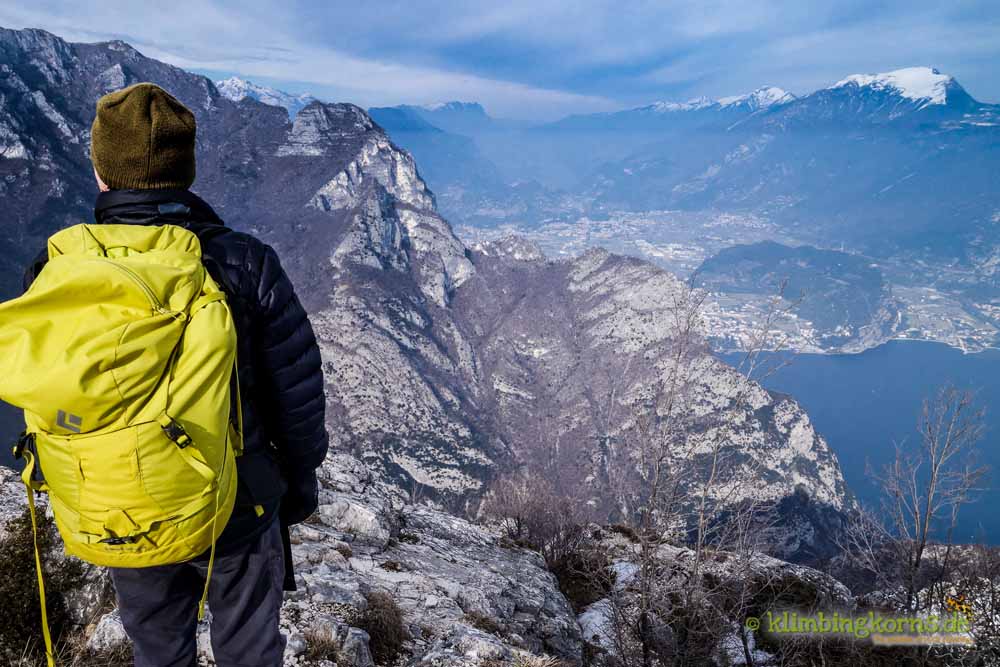 General information of the tour:

Tip: Start the hike from Pregasina instead. From here, you have a better view to Lake Garda right from the beginning instead of starting off from where we did. Therefore, no further description of our tour here, except for the GPS track below.

To download the track on your gps device, choose “GPX” in the dropdown and hit the OK button.