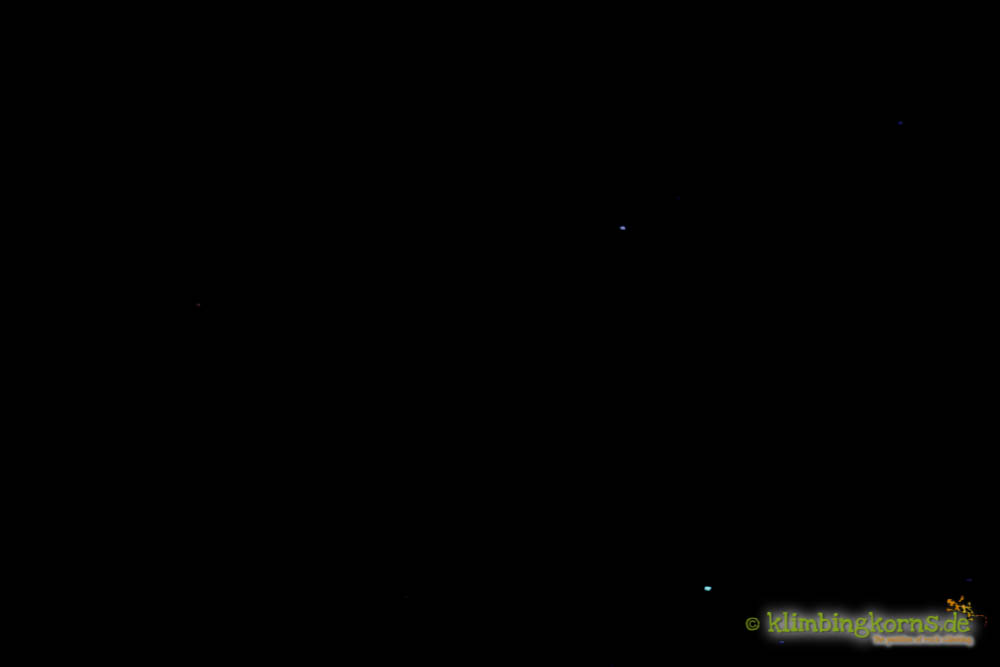 It was dark, the wind blew, it was cold. Don’t you see it?

Click, clack. My headlamps went on. We stood before the iron gate that leads to El Teide. It starts off from the Montaña Blanca parking lot. My suunto read 2 a.m It was dark and frigging cold. An hour earlier we had 23° c on the veranda, now it was just a little over zero. It’s clearly winter. No signs of snow. that was why we came here to sports climb in the first place.  I was glad I brought my fleece pants along. I opened my back pack and stuffed that in too. I had a feeling, it was not going to be a comfortable stroll on the track. Double checked everything. Extra batteries, buff scarf, woolen beanies, a down jacket, a primaloft jacket, a primaloft vest, hand gloves, sos foil blanket, 1l water, head lamp… funny I was doing this just before we locked the car. As if, I could’ve changed anything if I had forgotten something.

We locked the car and started walking. It was a funny feeling to start on a long trial, on terrains I have never seen or been before in the day light. The only thing I did was reading everything I could find on the net about the tour. I had downloaded the GPX track and had them on my smart phone. I brought an extra battery for the smart phone incase we got lost and need to use my phone excessively. The phone should also be there to call anyone in case of emergency. 112. The same number which is used in the whole of europe. But the joke of the day was to discover that once you reach Las Cañadas, there was almost no connectivity at all, and not any where while you are on the trial till after the Refugio when the trial turns on the other side of the mountain. So much for technic. 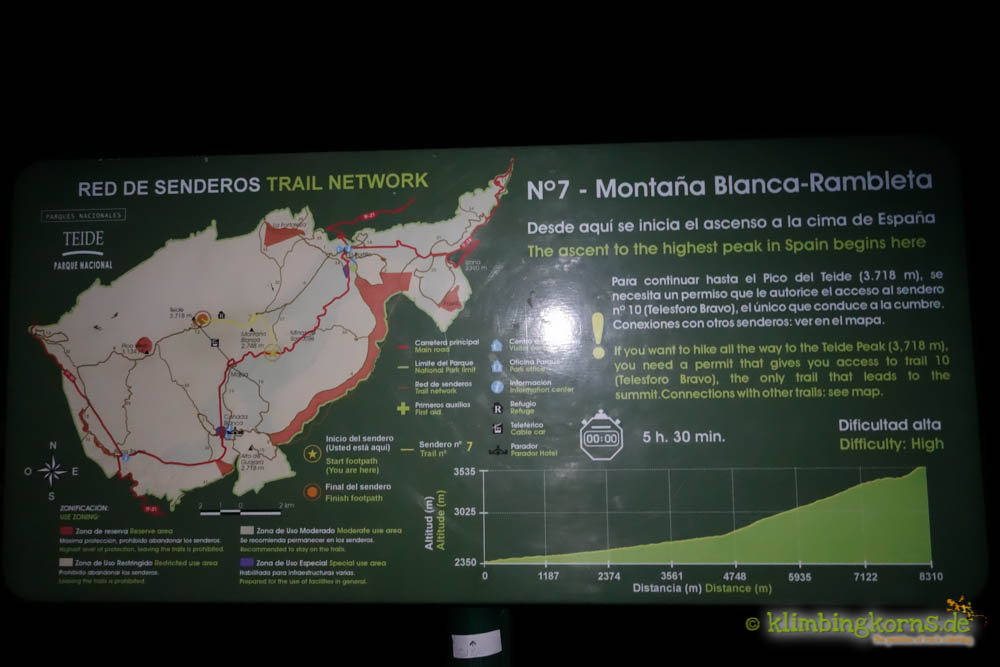 Senderos No. 7 – from Montana Blanca to Rambleta

I saw only what my headlamps was shining on. I saw nothing else but the powdery dust that seemed tp fly all over my headlamp. It felt like I was on the moon. I looked up, and about a zillion stars shone back to me. So clear and so many! I immediately thought about the aperture and time to use for the shot. But my DSLR was safe at home. The cold breeze brought me back to earth, and the sign at the beginning of track was saying something like 5 h 30 mins to get to the summit. People with heart and lung problems or little children should not be on this track. OMG, 5.5 hours one way!

I must be dreaming! 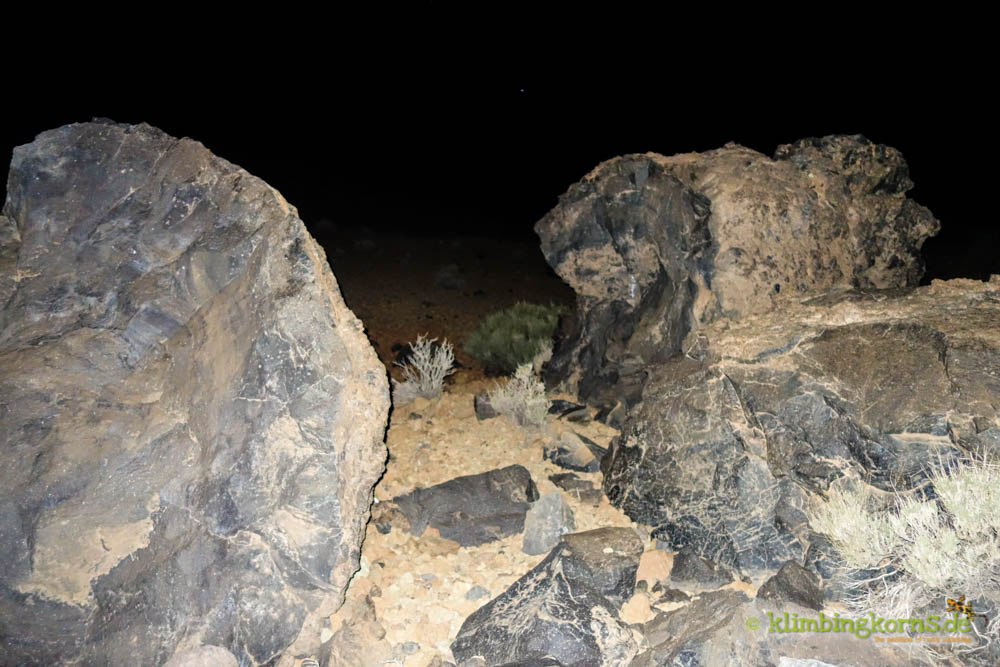 Pyroclastic rocks form most of the landscape here 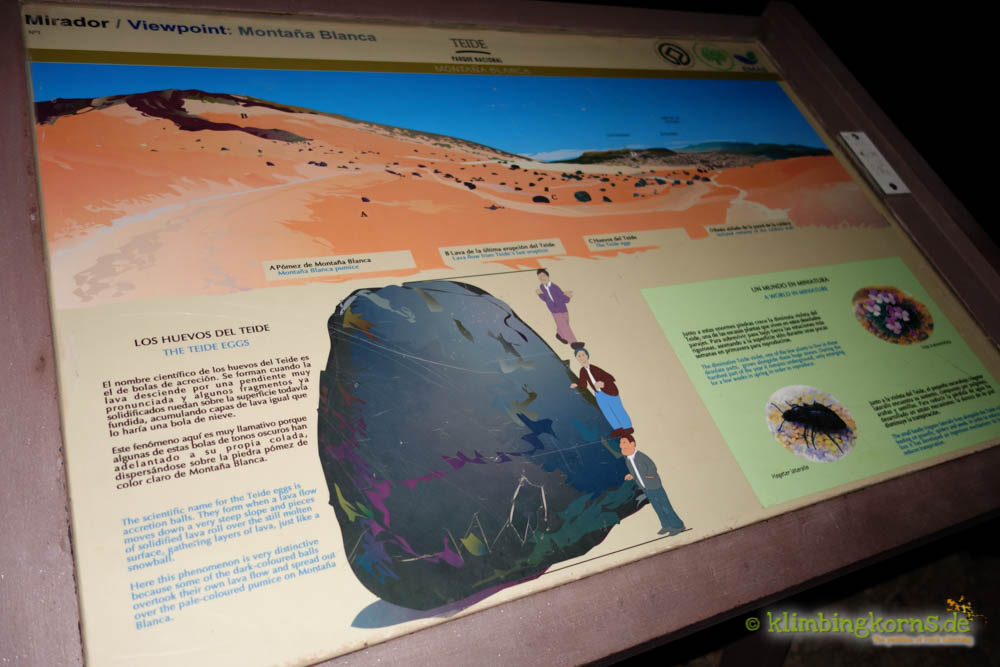 30 minutes later, we reached the Los huevos del Teide or “Eggs of Teide”. It looked like small little boulders strayed all over. In the day light, I was sure the dark clumps of rolled lava stone would have been impressive contrast between the beige, earthy dirt field. I saw just a few huge shadows. Would anyone bring their crashpads here. An hour passed, and the trial now started getting narrower and steeper. Left and right, stones were laid orderly to make sure no one would go astray. That must’ve been some work if built  with bare hands?  After what seemed like hours, the path started to get stoney. By this time, my breath started to get a little shorter, my head spun. I started to think this was a bad idea, after 3 weeks being down with a cold. I was in no condition to do anything like this. What did the sign say again?

Perhaps it was good it was dark and I couldn’t see how high the mountain was. It kept me focused and going. I followed in a trance, the headlamps in front of me. I was never certain if it was all just a dream, or reality. The wind was cold. I stopped to wear my leggings under the merino pants.

Give me a Cafe Leche!

A few serpentines later, I heard voices, I saw many head lamps. Refugio Altavista! There were people outside. Groups of them, standing outside as they cheerfully and somewhat energetically greeted us with a “Hola!” and “Where did you guys come from? “. I gasped out loud “the parking lot”. And someone replied “Oh! wow!”

I kept trying to look at my watch, but I could not get the watch out of my jacket sleeves. When would they finally build gps watches as thin as the apple watch? I took off the jacket, and checked:  3288 m altitude, it was 5:30 am. We were late. I had so much wanted to make a short rest at the Refugio and warm up a little 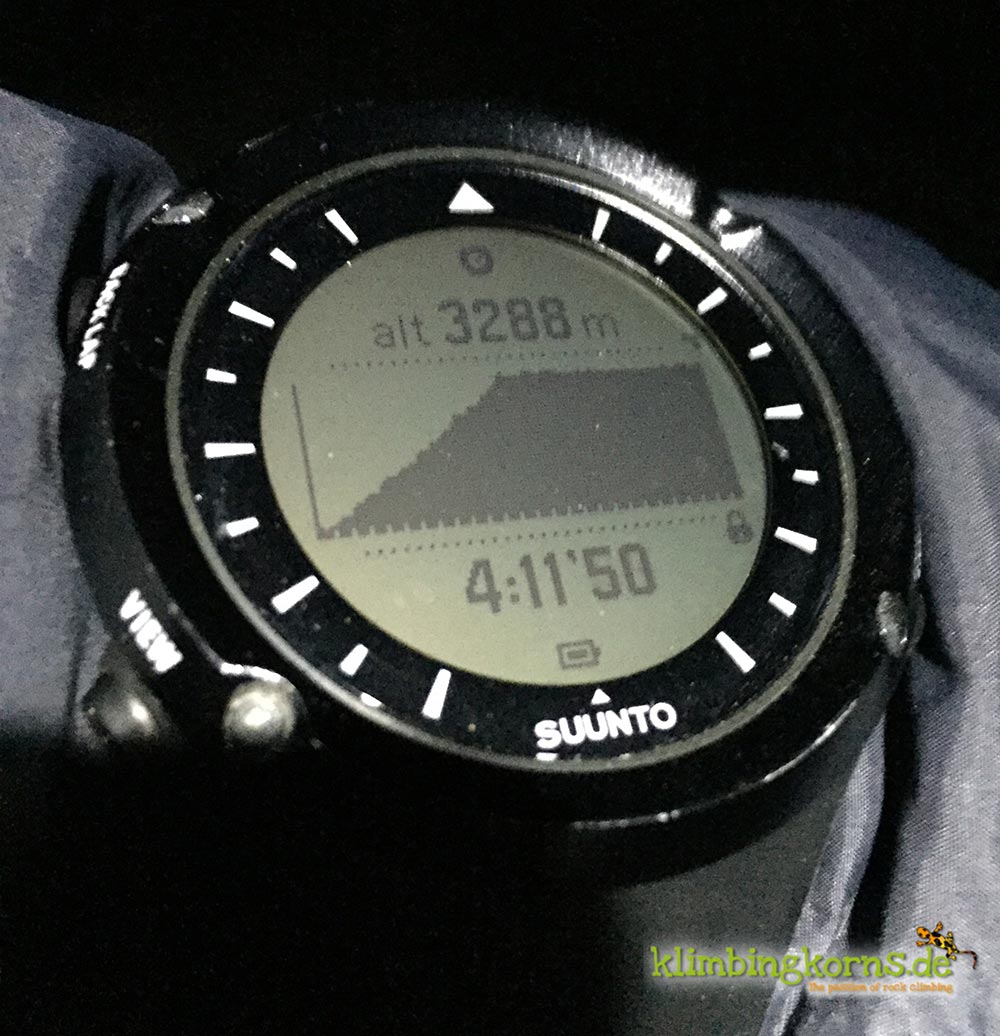 At the Refugio Altavista

before taking the last bit. But there was no time. The sun rises at 7:58 am and it’s not going to wait.

I bargained for 10 minutes. Time enough for a plastic cup of Cafe leche and warm up a bit. And paid 2 EUR for it. It had to do for the both of us. We had no more coins along. So we shared, what seemed like 50 ml of a bit of coffee in the bustling Refugio. Everyone seemed to be hurrying to pack and leave. We all now have the same goal. And that was to get to the summit by sunrise. Bit by bit, groups of people started leaving the Refugio. And we finally also continued our way up.

Where was the cross?

My head was still spinning on me. I was like gasping for air. How embarrassing! I felt so slow.  But even those who started “fresh” from the Refugio were making stops all the time. We reached the Teleférico station, passed by the empty permit gate. Dawn started breaking in. I knew, I had to quicken my tempo, if I wanted a sunrise to my summit. The last 25 minutes felt like hours.  Sulphuric gas rose right and left of me. The way was free from any ice or snow, which made the steps easy even though it was now steepest. I was overwhelmed with joy when I finally reached the top. It was an exhilarating feeling when the sun rose from the horizon. And a bombastic view! I had seen many sunrises the last weeks, but this moment was different. The wind blew strong, it was terribly cold, there was almost no shelter except for a few tiny corners of rocks where you could try hide yourself. (from the view and the wind) 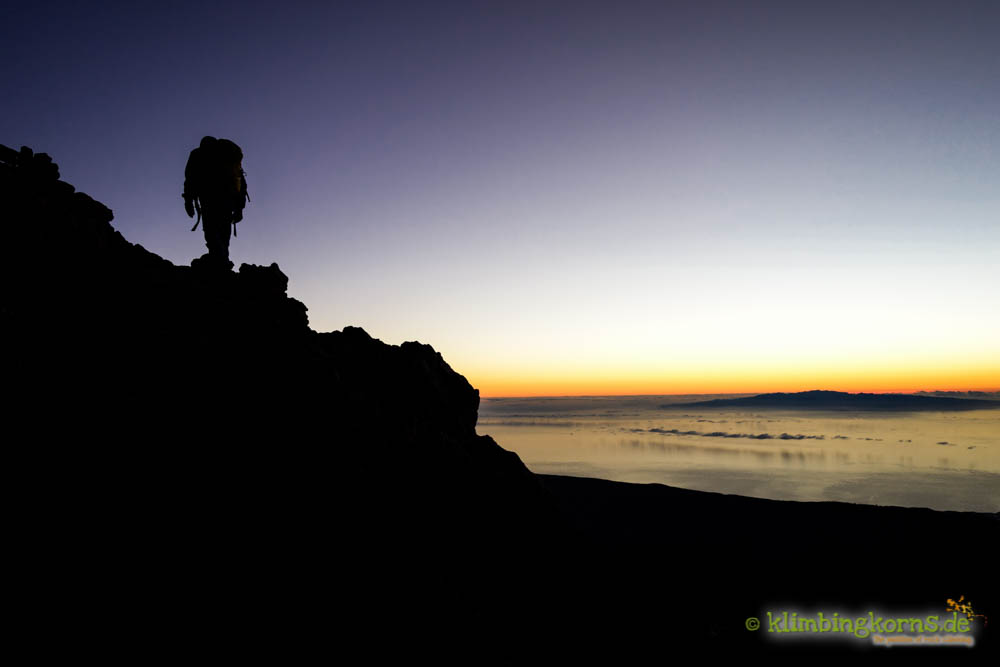 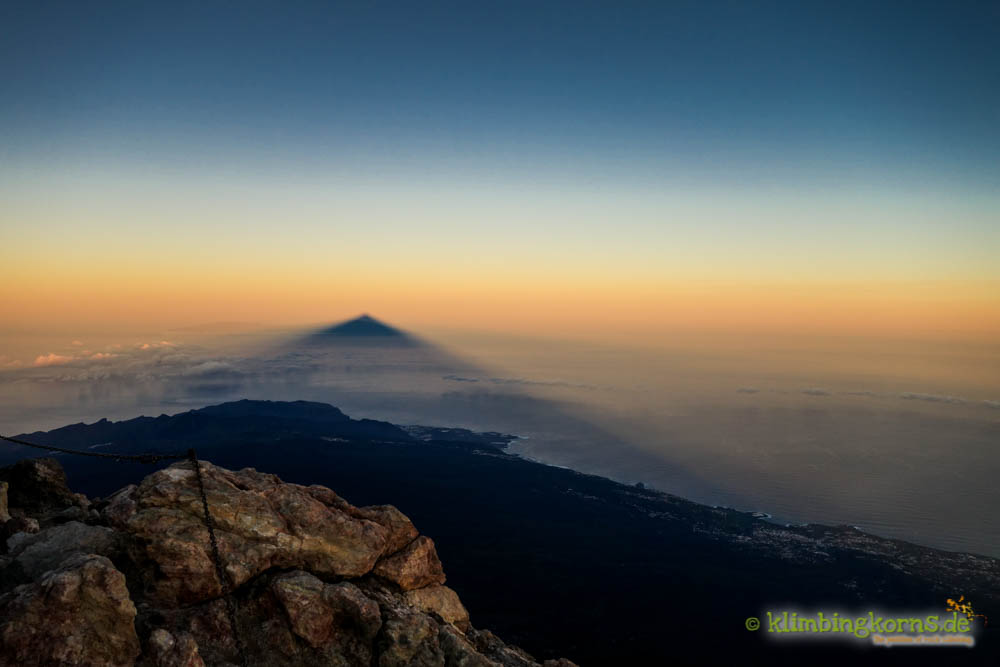 The shadow of Teide. The volcanic mountain isn’t triangular in shape originally, it’s a small phenomena. 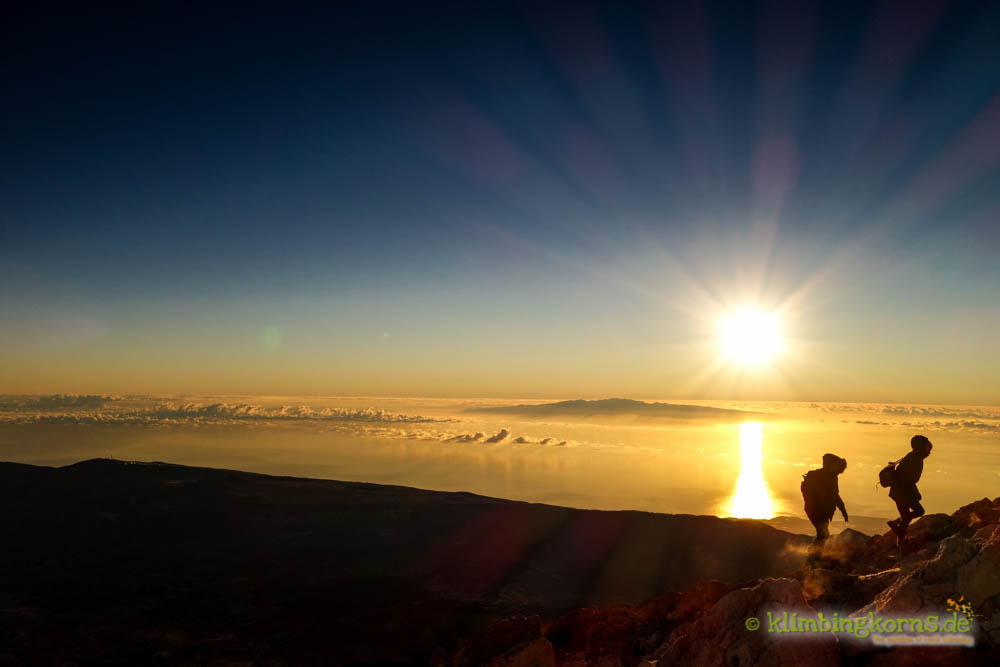 The little lump behind is Gran Canaria 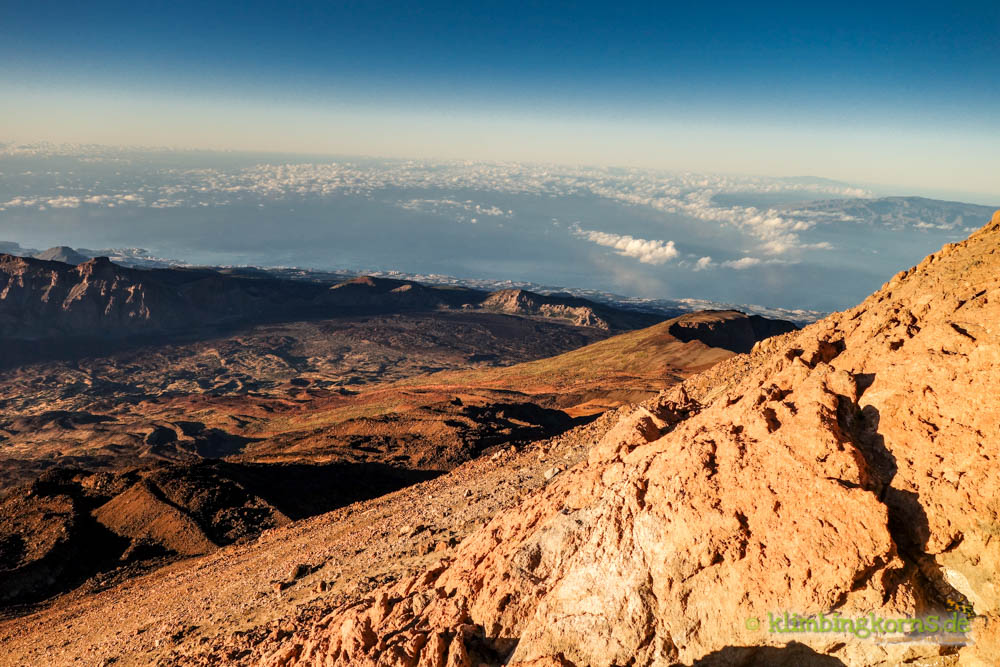 The world beneath your feet 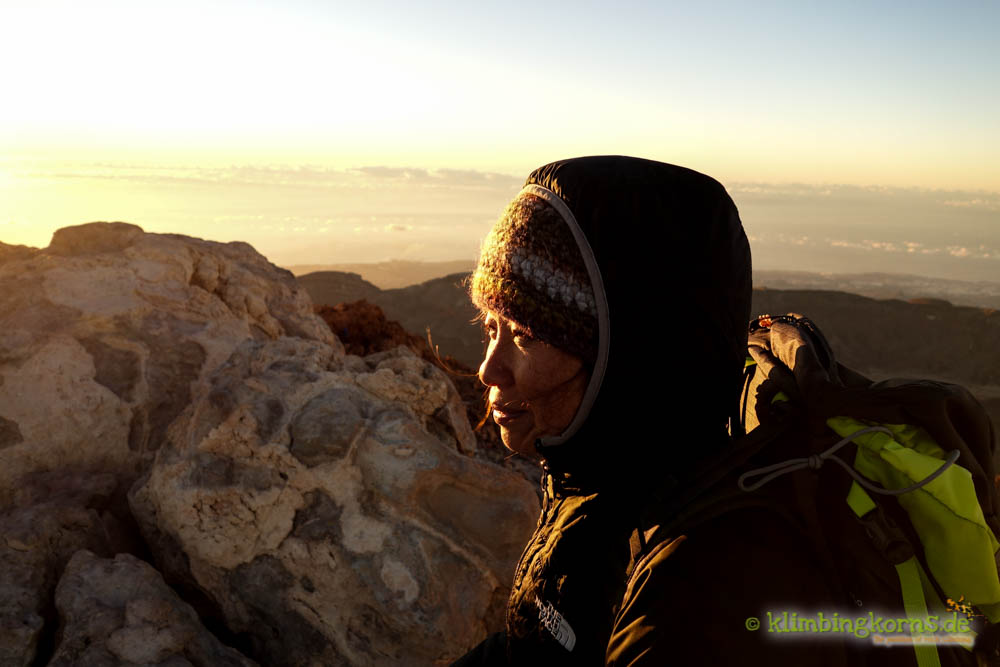 The descend was unspectacular. You could go back the same way you came, or take the Teleférico down. However, the Teleférico station is about 3 km away from the parking lot in Montaña Blanca. The buses that drives to Teide are buses that transports you from the coast once a day from either Los Cristianos or La Orotava, etc, and returns back to the coastal towns in the afternoon. It doesn’t commute to and fro the whole day. You can hitch hike, or walk on the main road back to your car. (there are no trials at the side of the road for pedestrians!)

Summiting a mountain with 1400 m altitude isn’t a big thing. It takes some training and condition to pass with flying colours. And without these two, you arrive just a little more exhausted than usual. But Teide, had a different spice. It’s the altitude that we should be weary of.  For some, altitude sickness can happen. The path is easy and mostly even, without snow or ice to hinder your way. The situation would be a completely different one with snow.

All permits were booked out, when I looked. It pays to book this a month in advance. There are tour operators that book contingents en bloc which leaves you empty-handed. In our case, I couldn’t find any convincing arguments to get hubby into the Refugio Altavista. But actually, I was glad we did the way we did. And we did it!

Generally, there are 3 possible ways of summiting Teide, depending on your condition. The easiest way would be to

(1) take the Teleférico up, get a permit (in advance), and summit the crater on the day you have chosen. Your permit is valid only on that day, in a block window of 2 hours. Should all permits be fully booked, you could

(2)  hike up and stay a night in Refugio Altavista (3200m) and hit your summit the next morning. Summiting Teide is only officially possible with a permit. Staying here the night enables you the right to summit this between 4.50 pm (the last cable car) and 9 am without a permit. The third way possible

(3) would be to summit Teide in this time in one shot, and taking along a sunset or sunrise with you. Make sure you leave the check point by 9 am. Your ascend or descend will be done in total darkness. Please check your health conditions, experience and endurance, before you decide on this option. Do not attempt this alone! The danger lies in the altitude.

General Info of the tour:

Even though the trial isn’t difficult and you can’t quite go wrong, you still will have to have good footwear, and know how to move around with headlamps. If snow and ice covers the summit, you might want to take crampons or hiking poles to keep your balance. Windproof and warm fleece jackets are something that shouldn’t be missing (wind chill) And if you’re dependant on the Teleférico, be aware that it does not operate during strong winds or bad weather.

Technically, some could say that Teide is an easy mountain to summit. Nevertheless, do it for the views, if you have the chance. 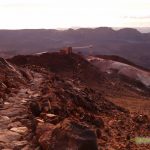 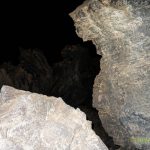 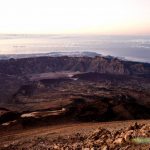 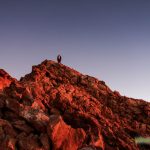 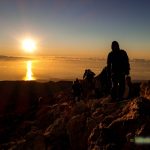 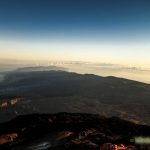 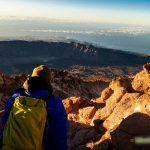 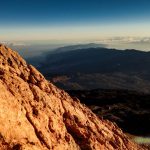 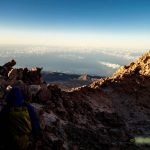 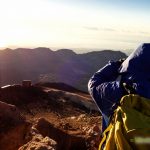 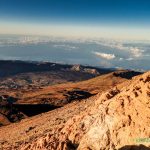 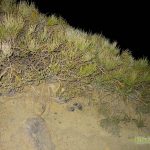