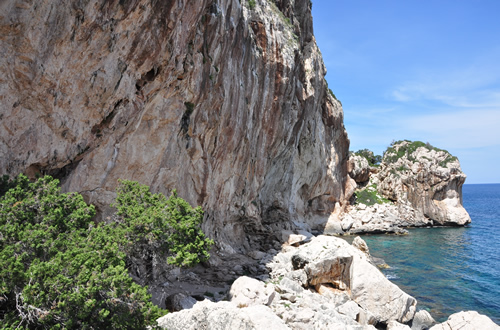 Isn’t it a dream to waking up to flawless sunrises, the cry of seagulls and the crashing of waves? What a good idea it was to leave the winter behind you and enjoy the warming sunrays on your skin, have your breakfast right on the beach (5m away from the water)and enjoy absolute serenity with your environment and yourself. We were back in Sardegna after 10 years with no regrets.

I never thought that there will come a day when you can’t decide where to go for your vacation. Normally, there’re thousands of spots to choose from, one better than the other…but what if you have already seen them all, what if you can’t really decide on where else you could go to and yet have a feeling that it’s still something new to discover and enjoy a holiday as if you’ve never been there before? Strange, to be able to come to such a stage.

There were a  few alternatives, St. Leger or Sardegna…. and found myself  24 hours later doing some soul researching for all possible updates on this little Island. The internet was full of updates, and there were news that a new guide book is on it’s way out.  It’s been 10 years now, that was the last time we were here and were pretty sure that there’s gonna be quite a few new crags and sectors that will liven up our spirits and mood. No luck, the guide book was just not out yet…and some say that it will only be out in autumn. I booked the ferry and another 24 hours later, we found ourseves finally on the way to Livorno to catch the ferry leaving on a saturday morning. Somehow, I was excited to see what was in store for us. 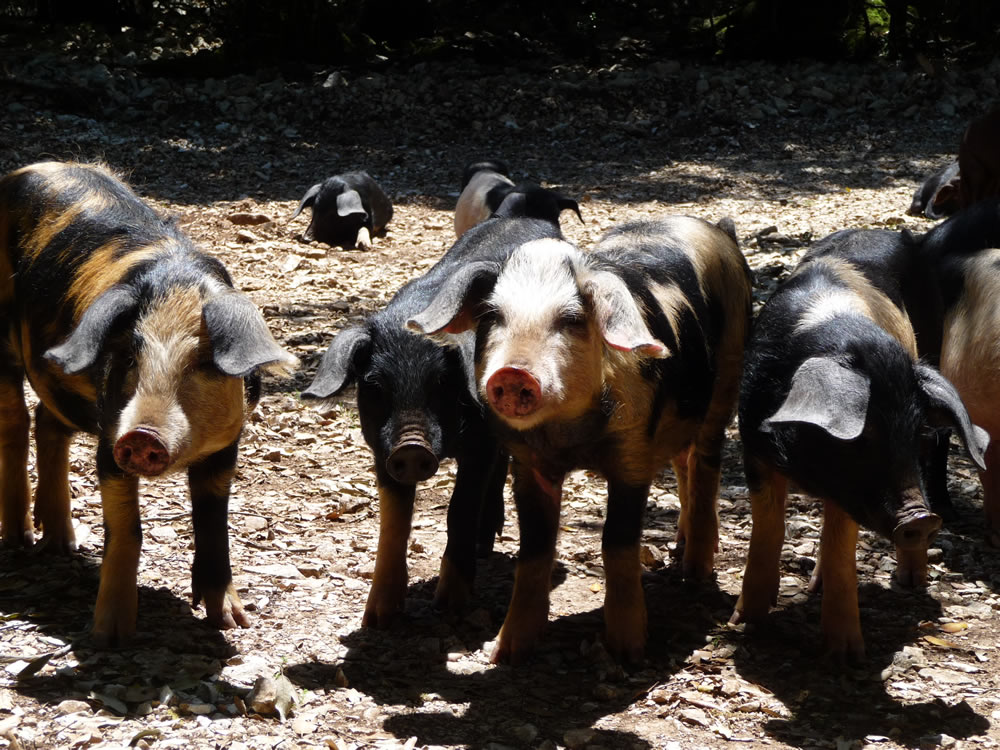 Our first destination led us to Siniscola. It had 3 differant sectors to choose from. With routes rangeing from 5c to 8b, everybody had a chance to climb what they preferred to. There were quite a number of NEW routes between the existing ones. With the sun coming in at 2pm, there was a bit of time left to climb in the shade. Also, there was always a slight breeze which made the heat bearable. Il Balcone is facing east, which makes it shady in the afternoon. We didn’t climb there, but it did look terribly good!

The second day brought us to the crags of Posada. It was reported that a new sector existed with some new routes. This sector is some 100m away from the central sector. Follow the path that goes right to the central sector which leads directly to Sector Il Picconaio. About 11 12-15m althletic routes exists ranging from maybe 6b till 7c+. If you go there right after the winter, be prepared to “clean off” the grass and bushes for the way. Otherwise, we did that job this year. The rock and grip is fantastic. If you are in the area, don’t miss this sector. The sun gets to the sector in the late afternoon. If the mistral blows, this crag is very windy. Once the sun gets in, it’s either too hot, or if windy, perfect. 2 routes start off at the first pitch of the cords to your left. (1 project and 1x “Gli anni passano per tutti” 7c+ ). The next upper terrace has another 9 routes. 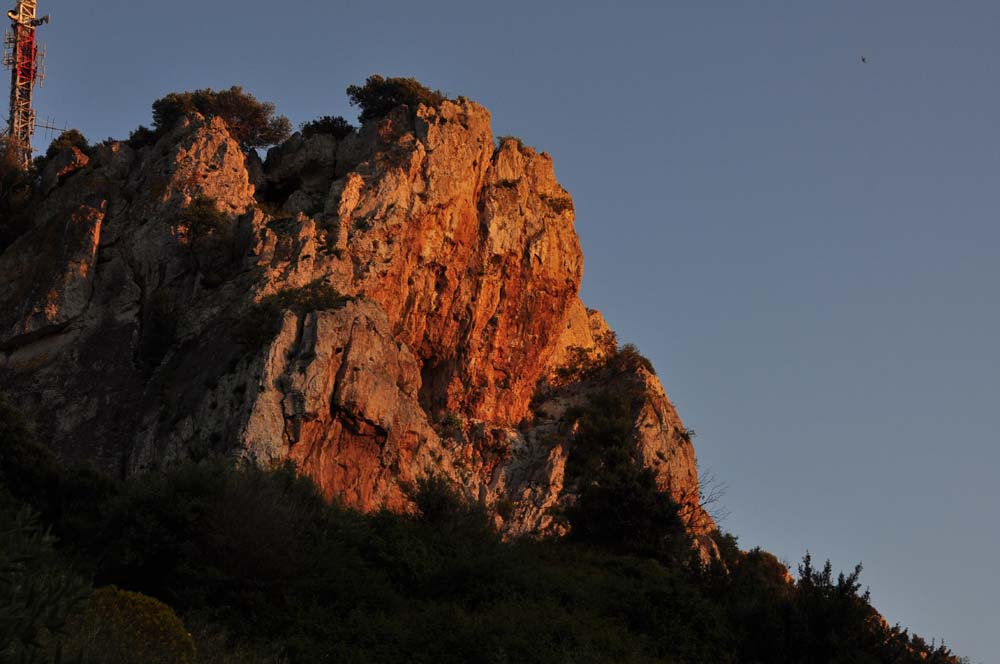 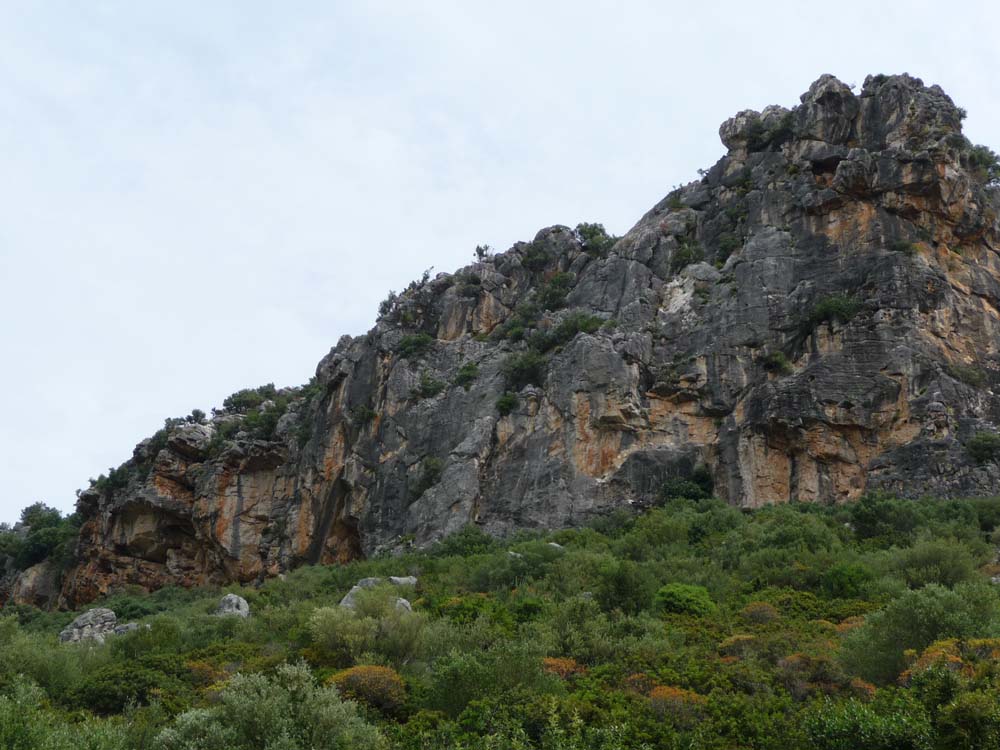 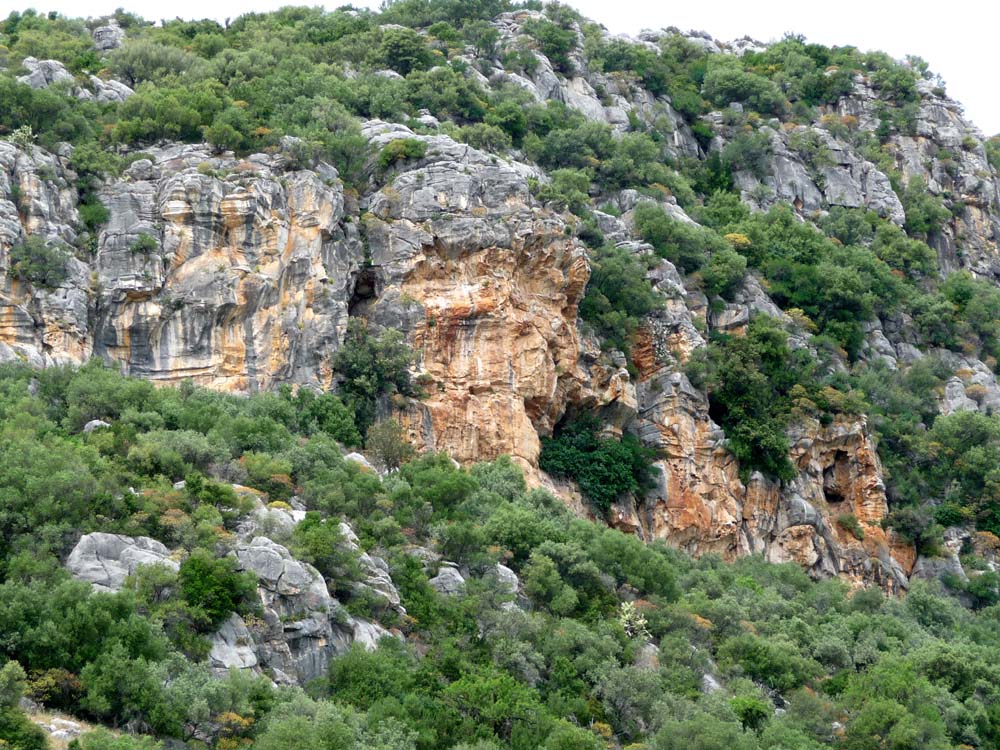 Noce Secca which means “dry nuts” was newly bolted in 2007. This crag lays high above the town of Dorgali and faces Northwest.  It’s a good alternative for hot summer days.  In the succesive years perhaps another 5 new routes were bolted in this sector which lays just above the outskirts of Dorgali.     You’ll find routes from 6b to 7a+ on the wall to your complete left, in the right side towards the and in the cave, routes from 7c+ to 8bs. It was amazing. The cave starts of with a 50° overhang that goes 10m out, and then 20m up. Unfortunately, the flutes and holds were dripping wet when we tried on the 7c+.  Braise yourself with some nerves for this route as the finish is paved with a 5-8m run out. In the cave you’d find typical flutes and holes, where as the rock in the central area has a white, flaky looking but amazingly rough and grippy texture on rounded ledges.  Good routes! Far left, 4 routes on slabs 6b to 7a. 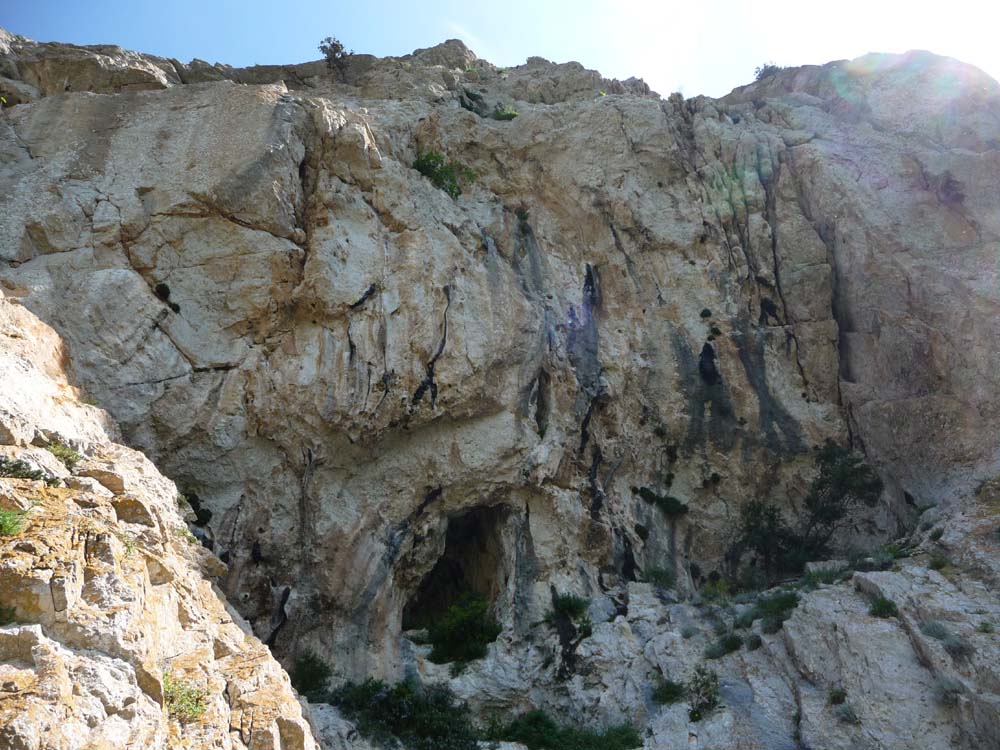 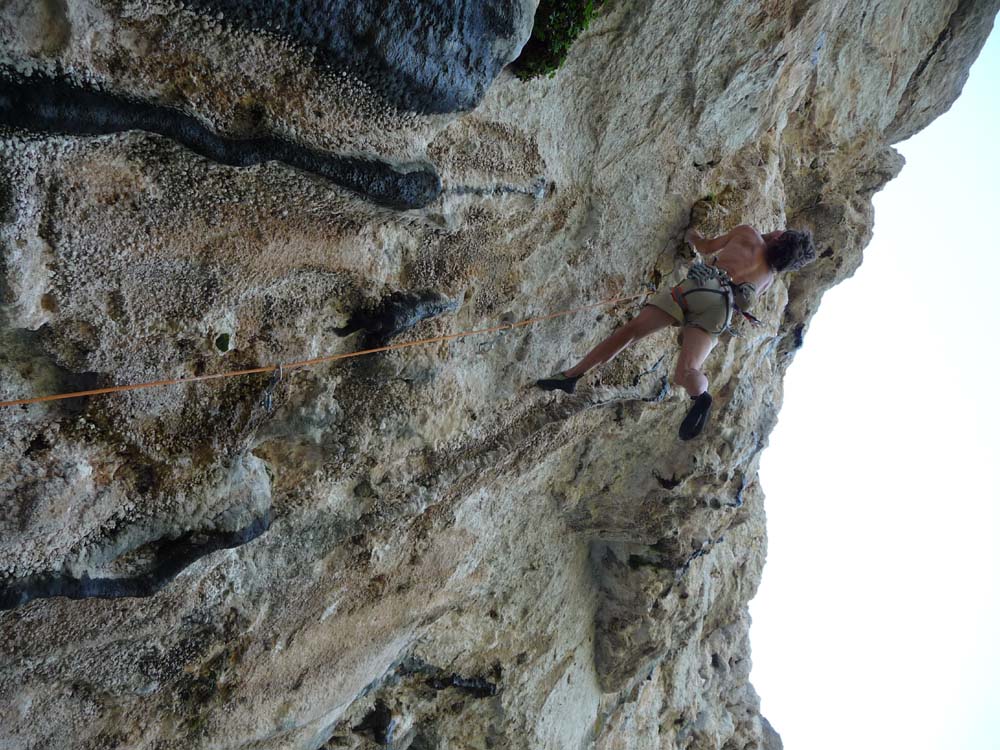 The second half of our vacation brought us further south of the Orientale Sarda, to Oligiastra. Rumoured that many new sectors have been bolted, rumoured to be wanting to make this area just as famous as Cala Ganone, rumoured that there were sectors for easy climbing on holes, little overhangs, and cooling gorges, DWS. We set up our base in Bari Sardo which actually had the best camping place to our taste. It was central if you’re going to climb in the areas of Baunei or Jerzu.  It took about 30 mins to either destination. More ever, the new “motorway” between Tortoli and Cagliari was just about to open, which makes travelling a little faster.

Villagio Gallico was the first place we got to. Many new routes were bolted to the area, as well a new sector with about 40 routes to the right. Must do routes like Frolix 6a+, Il Pianto di Idefix 6c+ or Cleopatra 7c are really fun and calls for finger endurance. The sun leaves the crag about 14:00 in May. A new sector Creuza de Mar with about 34 routes is right next to Villagio Gallico.  At Campo dei Miracoli, an old quarry with a few new easy routes were also bolted to the right. These 3 sectors are ideal if you’re looking for close bolting. 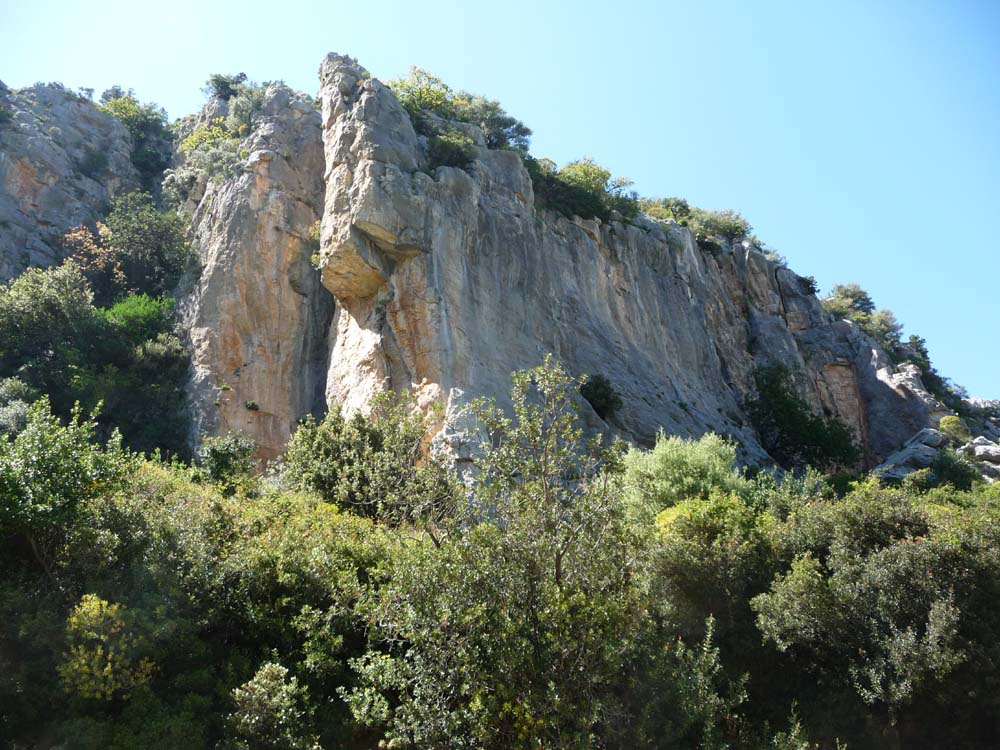 New sectors like the Su Telargio Oro cave, Dinopark and Monte Scione or the Lemon house crag did not make it to our list, but you can view topos and decriptions on www.27crags.com.  The Bed & Breakfast “Lemon house” in Lotzorai with Peter and Anne has done quite a bit of bolting in these areas. These crags especially the Telargio cave would be a true alternative in the summer as it is in the shade most of the time. Searching for the crag is itself an adventure!

Jerzu with it’s Palazzo di Inverno and Isola surprisingly, has some climbs with an pockmarked wall. Routes like Shostakovic 6c+, rating it 3 stars, reminds you of climbs in Frankenjura. (Twice the length, mind you) The rest of the crag offers some compact limestone climbing. To get to Isola, start of at the base of Palazzo di Inverno and head left over the pass to the wall on your right (15 mins)

The sector “Cave of dream” has also now more routes than mentioned in the existing topo and is worth a visit in the summer time when it’s really hot. In Ulassai, hit signs for the Grotta Su Marmuri. From the sign”Campo sportivo” drive up the road and park at the campo. From there, head on the path around till north of the campo (right) until you reach a junction with hiking signs for “Ulassai –  20 mins”. Turn right, about 100m later find a stone hedge to your right that leads you to the small canyon/cave some 80m later. Slightly overhanging, cool and long routes covered with some flutes and crystalized quarz. The routes are bolted on both sides of the little gorge, therefore, it’s possible to climb in the sun, if the sun comes in at all. 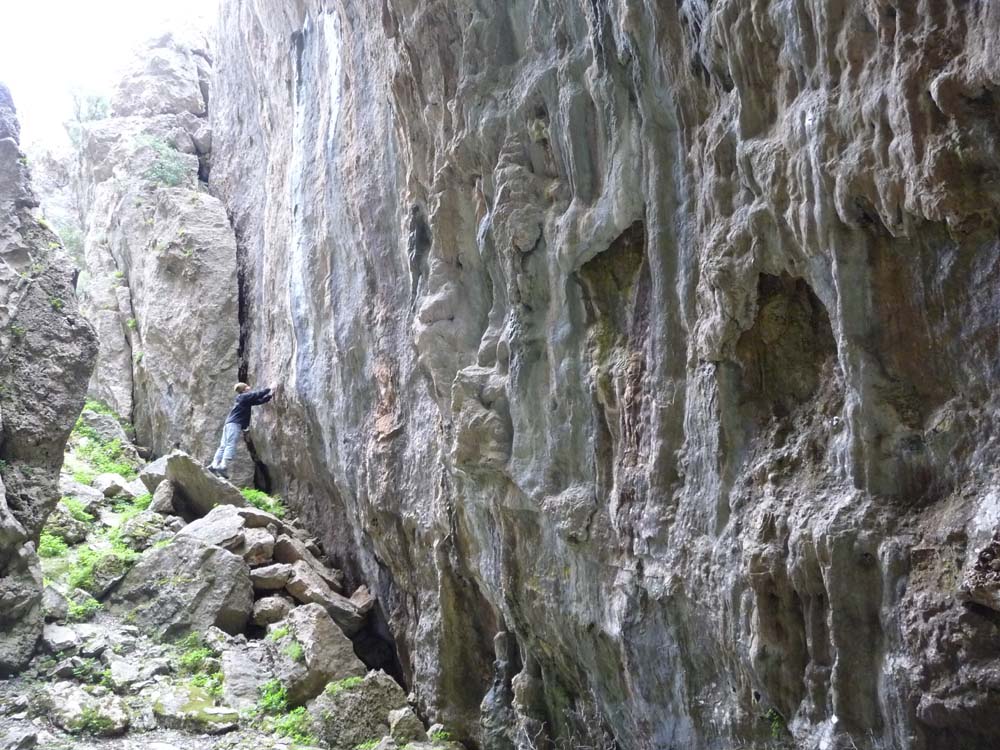 Su Telargio Oro cave…if you don’t have the access description, you’re probably going to find it from the wrong side of the valley. Equiped with just some GPS coordinates and a pepper spray for aggressive mother boars, we set out in search for the reputed cave. You can find about 40 routes here from 6a – 8b. It’s best if you’re comfortable with climbing harder routes to come here. The cave itself stays in the shade the whole day, if the mistral blows, it can get pretty windy as well. Topos and pictures are described in 27crags.com Unfortunately you find only GPS coordinates. Not very easy, when you’re not equiped with any Garmin device. The 8a+ Makak in the cave was dripping wet. No chance for trying that route this time round ;-)
Access: Head for Baunei, and follow signs to the Golgo Plateau. Stay on the main road (that becomes a dirt road at the plateau) heading to Cala Goloritze or the “Co e Serra Nuraghe”, staying slightly right. Park your car at the uppermost point where you can park at ease and follow the wide path towards the not much left ruine of the Co e Serra Nuraghe. Leave the Nuraghe on the right, following little stone hedges (or whats left of it) that leads you through a broad, shady ascending path until you reach the cave within 20 mins. 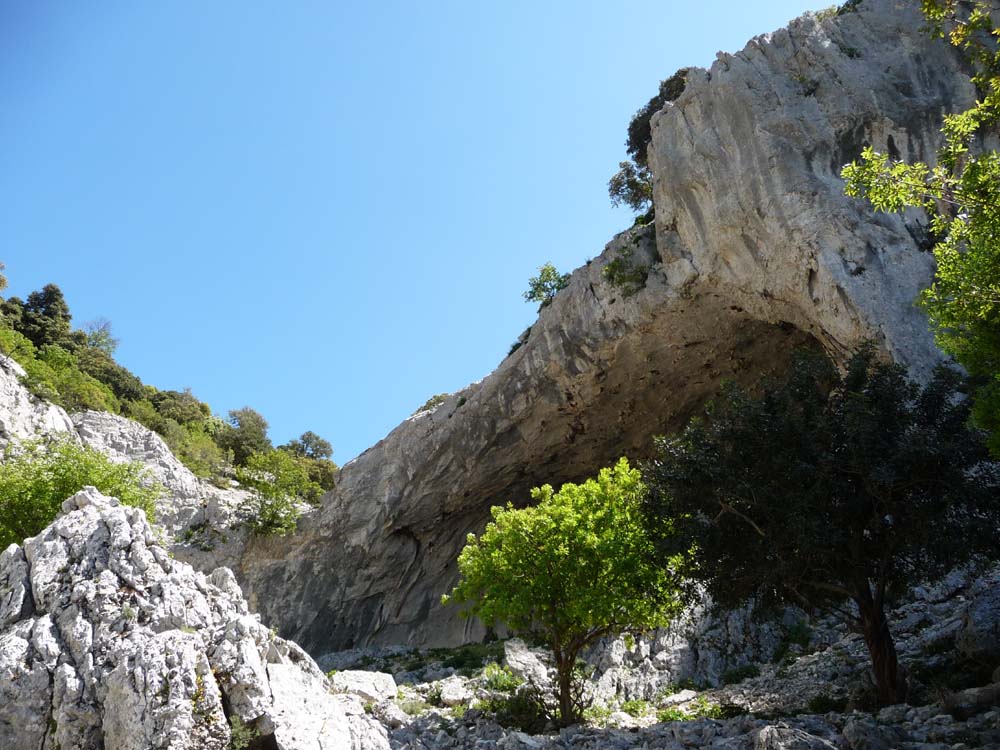 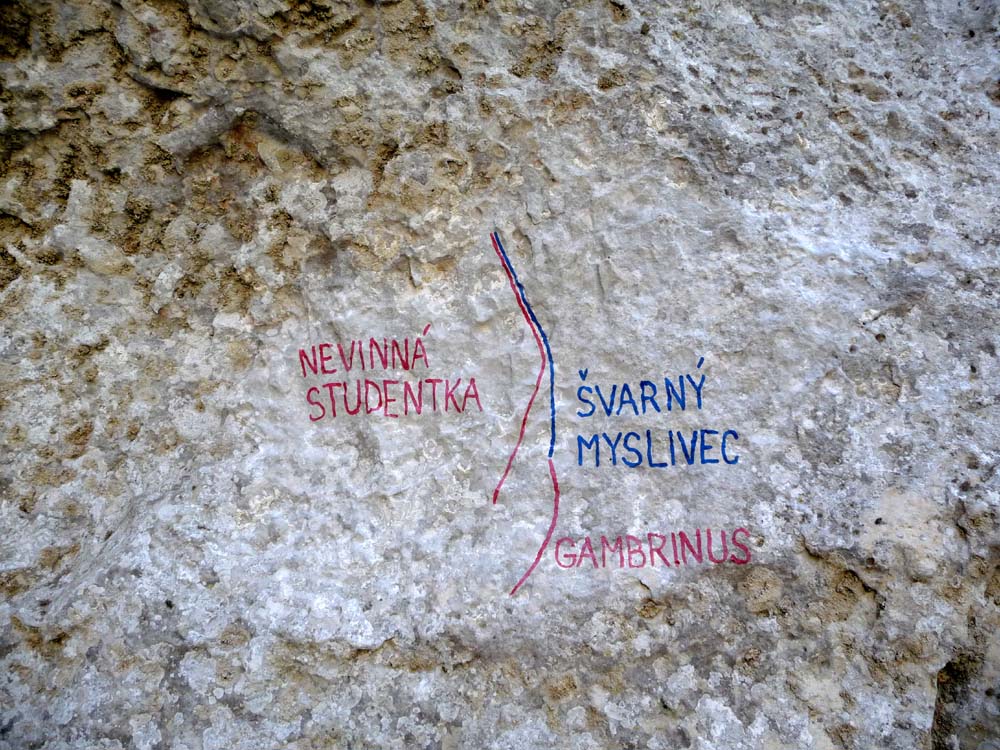 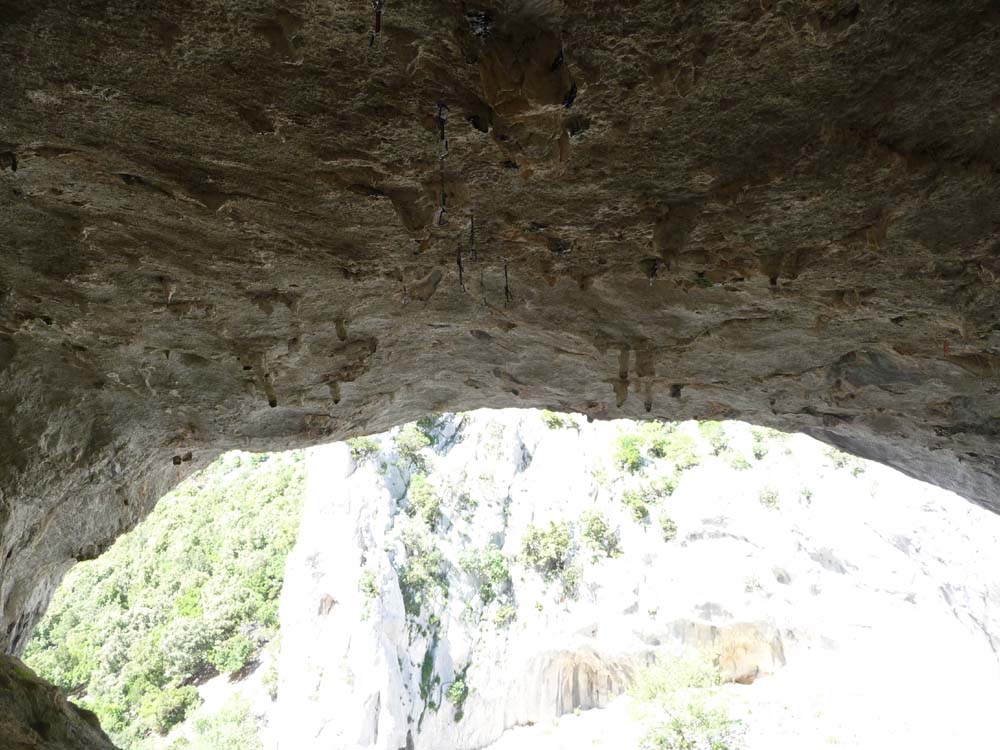 We ended our vacation in lovely Cala Gonone. New sectors like Millenium, Buchi Arta or El Chorro, as well as the new walls between the sectors in Cala Fuili could be worth a visit. Raoni sector was also surprisingly good. More for those of you who loves overhangs with brutal moves like on Raoni itself (8a). Tapiri(7a+) or Mammolo (7b) all deserve a couple of stars in that sector. Nothing changed very much compared to the last time we were here. It was just very very quiet – yes it was OFF season! It’s a great time to come here if you’re looking for crags all for yourself. Nevertheless do bear in mind that tufas are made of dripping water and they do it best in the spring time. Most of the tufas were wet when we were there, a shame. Nevertheless there were sufficient other beautiful routes to keep you busy with. 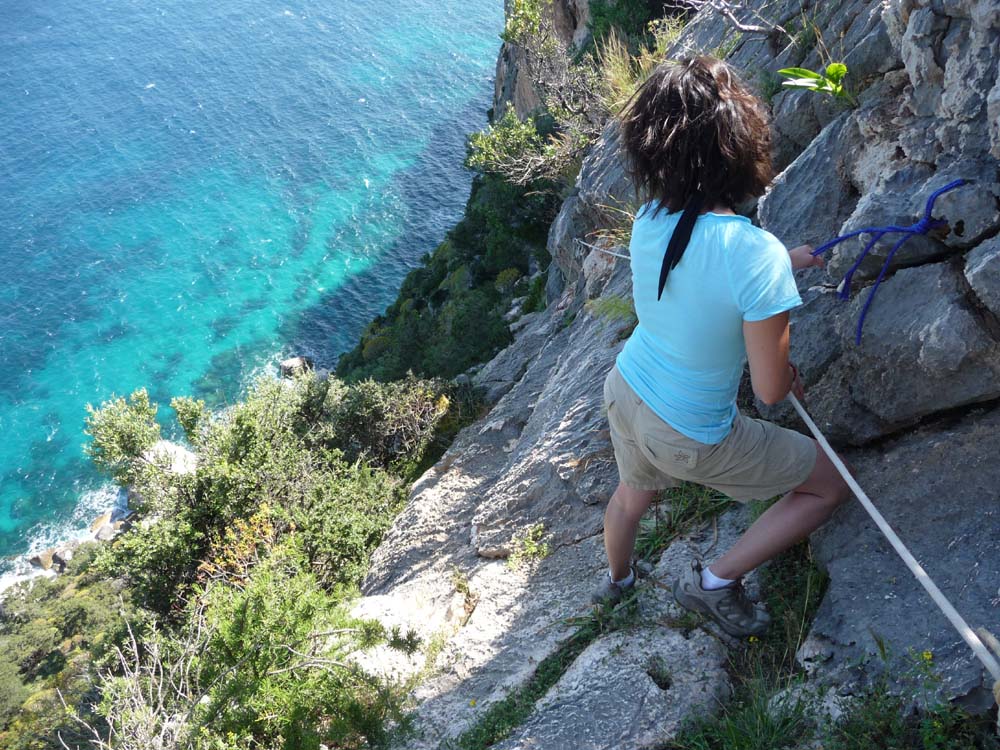 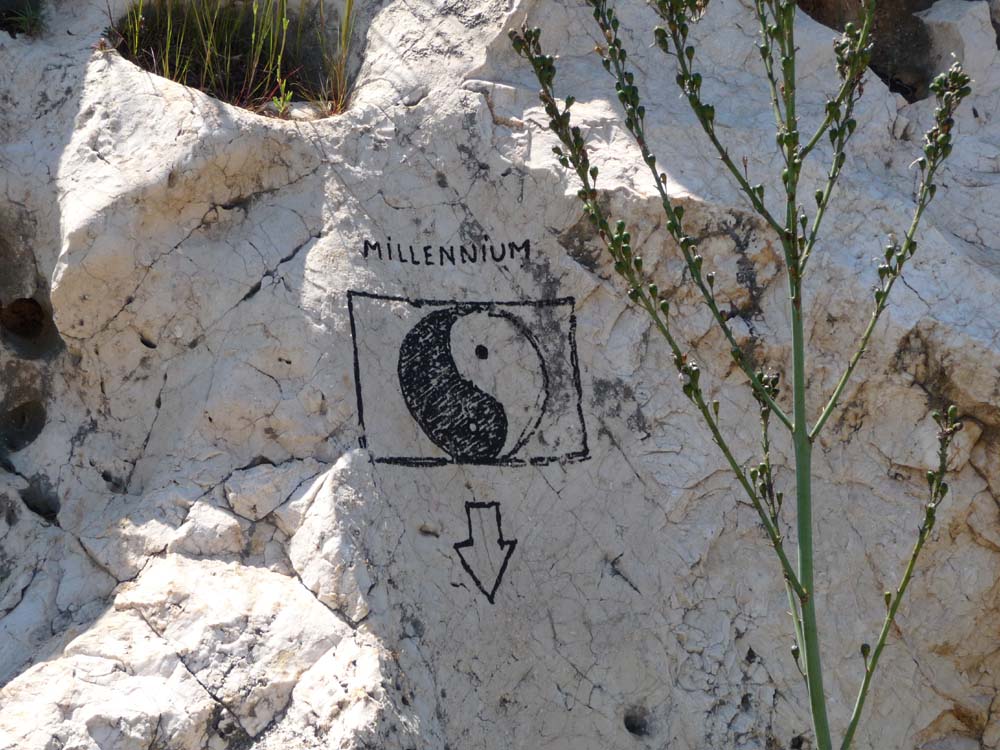 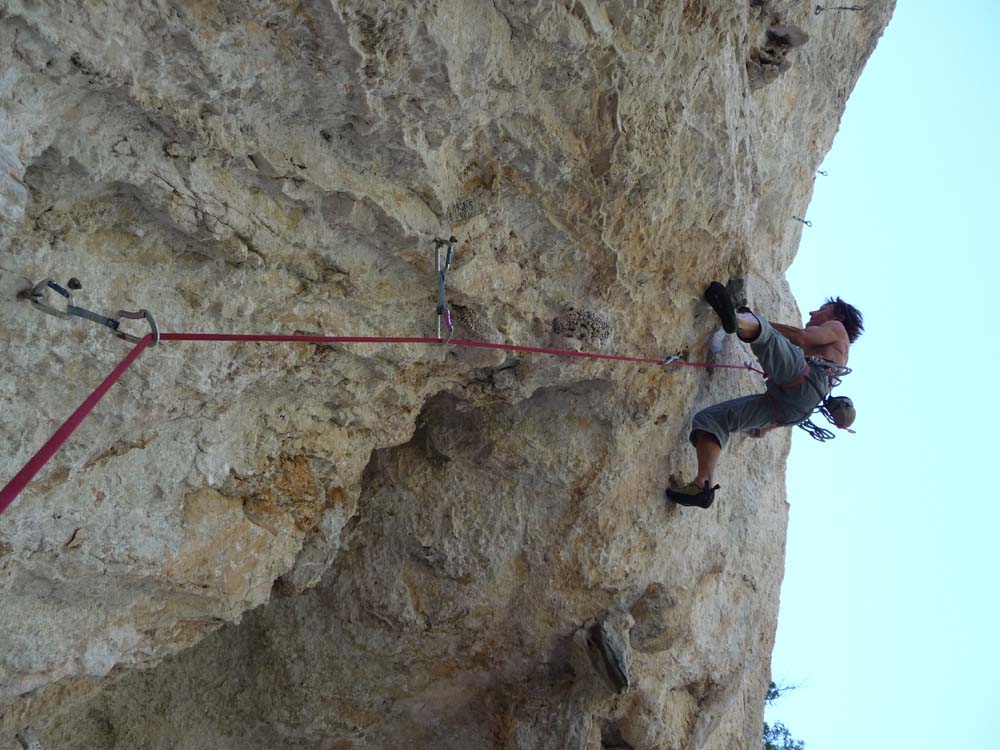 Some information of the area:

Spring (May) is a lovely time of year to come as temperatures are around 23° and Sardegna is green and flowering, but the sea is just 13°. It’s already too warm to climb in the southern sides of the crag, unless you’re sun prone. Be prepared to find most of the tufas and overhanging routes in shady sectors dripping wet. And don’t forget to bring a small garden scissor. Autumn is probably a better bet, to combine both activities like climbing and beaching.

with a great choice of  flats and homes to rent in Cala Gonone, but also all over Sardegna, Sicily, etc.
Expect good quality and warm hospitality from Matteo and Family :-)
If you’re interested in individual boat rental, just ask Matteo. He’ll be happy to help.

For those of you who have seen the island and wants to specialize in just a certain area, I suggest you come to Nuorese and Oligiastra with numerous  single-pitch climbs to last a lifetime, bouldering and DWS. Besides climbing,  it’s a haven between wild boars, fantastic beaches and cannonau!

Check out the Update on Sardinia sent from Peter from the Lemon House, in Winter 2012.