Climbing in Val Durance – a perfect getaway for the summer 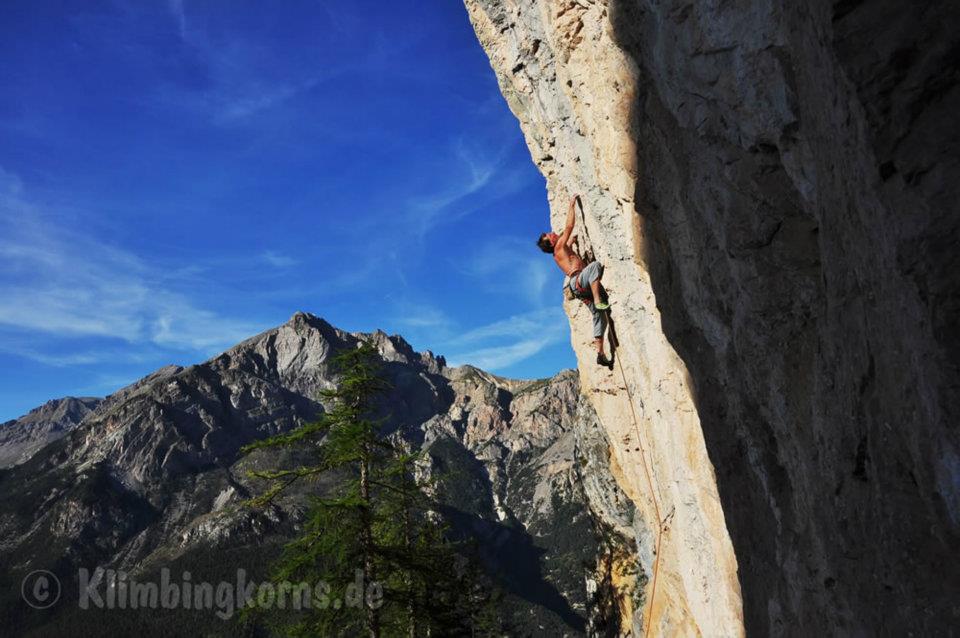 It took a while before the new guide-book came out again. And when it did, I was so happy to get it. Awesome looking lines and new areas in granite, conglomerate and limestone, all clustered in  Val Durance. I was amazed how international and active the scene has become. There were annual boulder cups and rock climbing competitions, the area has developed well for the rock climber in the last few years.
A mecca for the both the sports climber and multipitch (sports) climber. We were so sceptical, if there were going to be “sufficient ” shady crags for us, as we were indeed fleeing from the 35° heat wave we were having back home. But Val Durance offers so many choices of shady crags with perfect bolting. Val Durance is isn’t new, it has been existent since many years and has been always well reputed for it’s good choice of rocks in the area. This valley also stays a lot drier than the majority of the Ecrins Massif.

The crowd and tourists heads here mainly during the summer time, where weather stabilizes and temperatures goes up to an average of 25°c (felt 33°) during the day, and the nights drops a wee colder to 6-8°c. You’ll be probably feeling more at ease with a 80m rope if you’re the explorer. We brought a 70m rope along, but had to cut off short on the 40m routes that looked so good.

There are 3 main densities for where these crags are found: Briancon, Argentière La Bessée and Guillestre. Putting off at a campsite in Les Vignettes made it central to get to all the places. We needed 20 mins to Guillestre or 15 min to Ailfroide. The crags around Valloius were just above our heads. The grade ranges from French 3+ to 8c+, all well bolted. Be prepared to take your car through a few dirt roads to reach some of the areas. This is not always shown in the guide book clearly. If you’re picky about your vehicle, then you might be better off else where.

Shops for mountaineering equipments, guide books, etc can be found in Briancon and Ailfroide or L’Argentiere. The Guide book can be found in almost every book shop, or the Tourist Info Offices (in Briancon) …. Val Durance is surrounded by many 3000+m peaks and offers a fantastic holiday in the midst of high mountains. It’s a great area to getaway from the summer heat, but yet enjoy the summer during the day. On rest days, there are many other adventures for the whole family, young and old. Go kayaking, biking or hike up Pelvoux. The Upper Durance is a major summer venue for outdoor folks. Superb summer mountain walking in the quieter country of the Queyras towards the Italian border contrasts with glacier country to the west up in the Ecrins.

Climbing on finger pockets and pebble stones is what you will find yourself doing in Rue des Masques. There’re 3 differant big sectors, well actually 4 if you’re counting “Simoust” as well. Amazing 35m lines on “not-yet-so-polished” conglomerate. The routes are enduring and not always very technical. The first few sectors has easier grades where you could choose between sun and shade. It is also the coolest sector from all. On strong windy days, take care of falling rocks from above. The sectors behind has more routes with harder grades.

Expect more buzz on weekends where the normal tourist passes by the crags to get to the stunning waterfall from Mont Dauphin.  Thats just after Sector “Croix de la Vent” Even in the weekdays, it can get crowded. (not only from climbers) 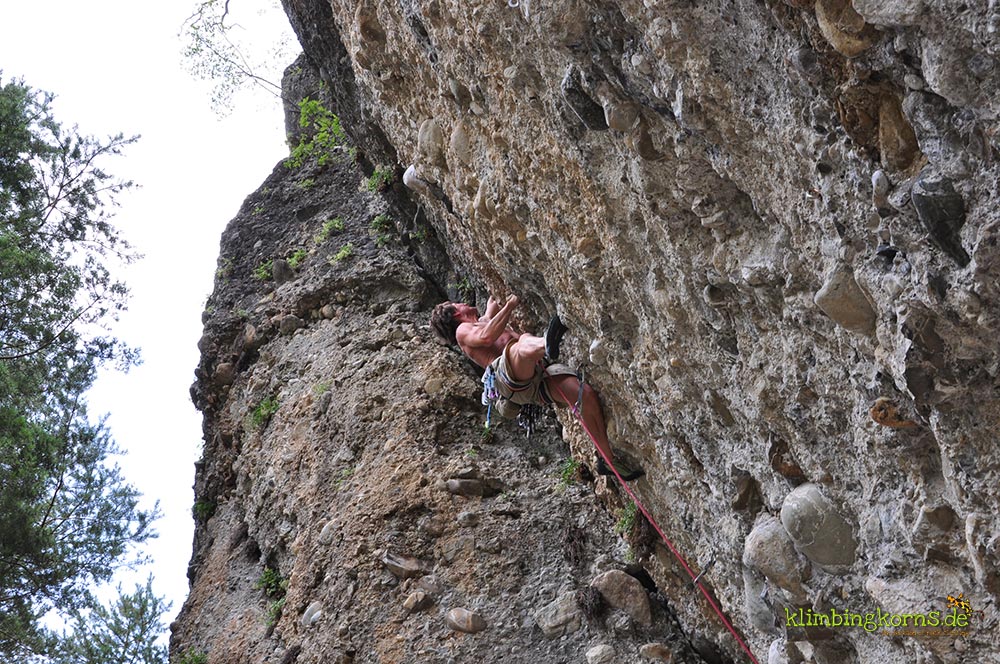 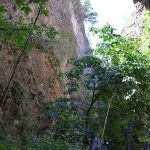 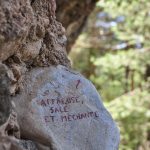 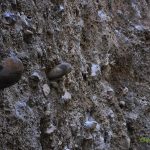 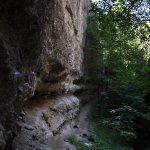 The first sector – usually not this empty

Tournoux is a cool alternative on hot days. It offers a south, and a few north facing sectors. Drive all the way up till you reach the big parking lot and park there. Just right after the signs, pass them by to access the different sectors. On sunny weekends, be prepared for the crowds that come for a picnic, Via Ferrata and hikes. And that can be plenty.

There are 3 sectors in Grand Bois. I guarantee you that you’ll find that alpine feeling, even though you’re actually just sports climbing. All sectors lies above on a terrace after crossing an airy Via-Ferrata access. Grand Bois is north sided and on some hot summer days, extremely cold. (More like down and beanie day) An 80 m rope would’ve been perfect but  we had to manage the day with just a 70m rope, taking care always with a knot at the end of the rope! Carelessness could result in falling off the balcony while lowering off from the anchor.
Climbing is banned till end of June!  The local eagle has his nest up there, which we discovered on our recent trip. The first sector is a little uncomfortable to belay, and the access might look like a jungle that none has been going to for ages. However, that does not justify the fact that those routes are just as awesome as the middle sector. So don’t let it fool you. We almost turned back that day, if not for those flies that kept us fleeing to the top.
Flies and mozzies were really quite a nuisance, especially when it comes in zillions. 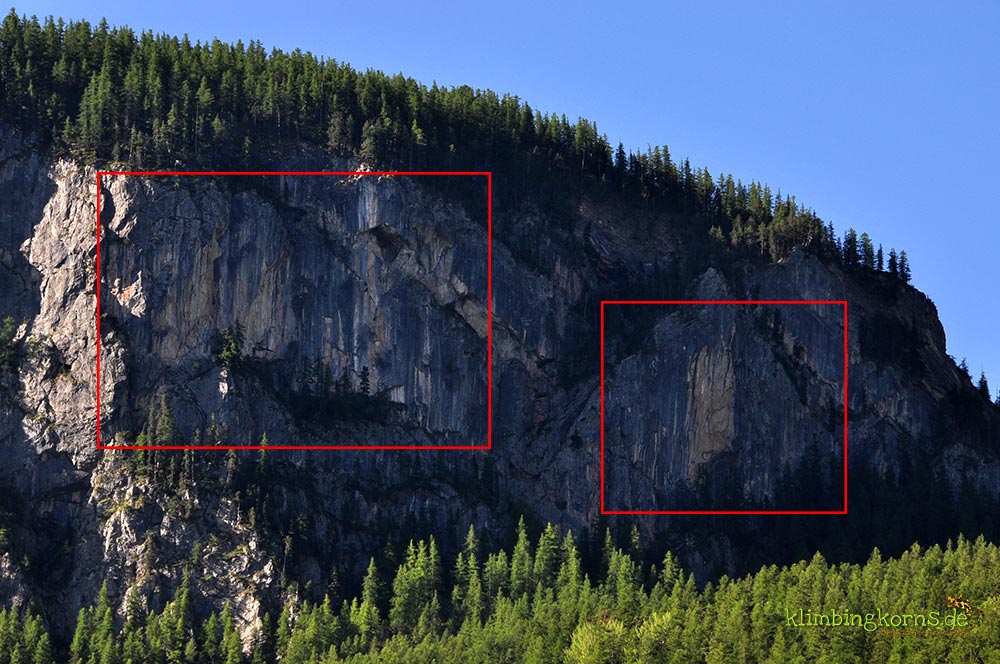 We had some difficulties finding the sector Le Gorge in Ailfroide. After an hours search with our heavy packs, we finally found it. The sector lies next to the multiple pitch routes.  You might find someone rappelling over your head in the evening or late afternoon. So beware of ropes falling flying over your head without warning. Long lines that are technical and enduring,  in an east facing wall (unlike the description that it’s a north sector). At 1600m altitude, with a sturdy wind, this makes climbing in the sun bearable and fun. 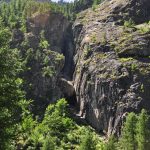 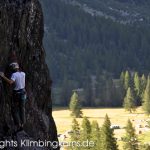 Ailfroide, the joys of granite 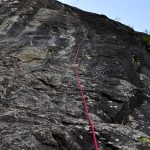 It looks awfully slabby, but you’ll be surprise to find many holds 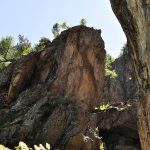 This wall lies in a (rather) quiet valley off Pelvoux  became popular for the strong climbers recently. San KuKaï, 9a – the red point dream of many ambitious climber. We came here, not to climb this route, but the others on the left side. I fell immediately in love with everything what I saw – the wall, it’s surroundings, the routes.  The sectors (1&2(northeast) and 3(south)) lays at the end of the Valloise valley. The area is perfect for climbing between June and October and is divided in a shady sector and a sunny one. The north sided crag lays across the river which you will have to cross. For those of you shying from the water, there is a little bridge further to the right which brings you across. Alternatively, you can take the biggest bridge which starts off from the big parking lot for the hikers. This would also be the furthest to walk. 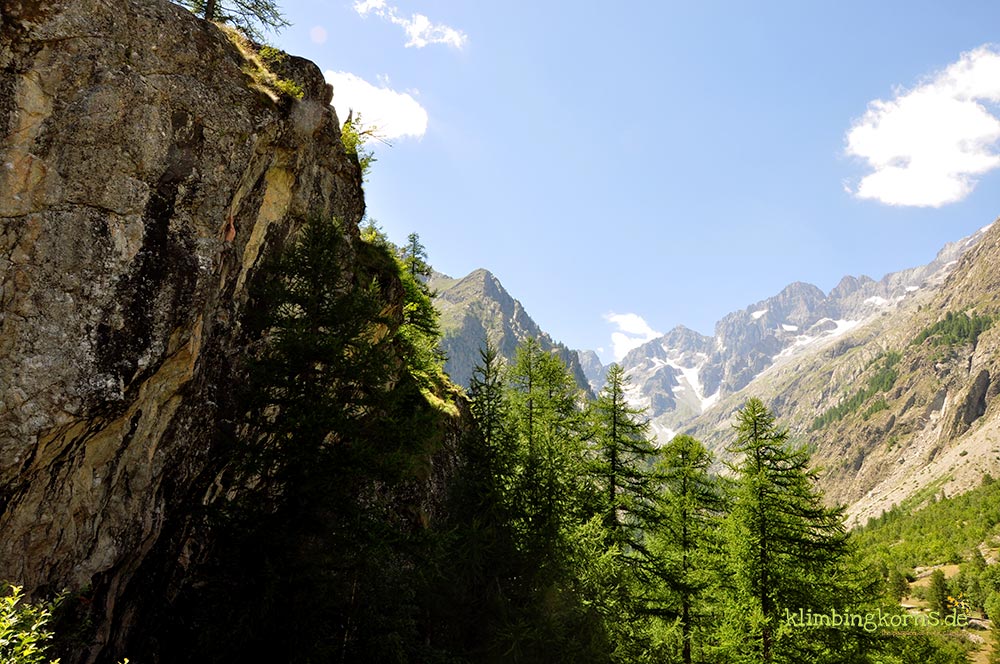 The “warm up” routes are found in sector 1 (to the left) and as you work your way around to the top climbs to the right. All routes are great fun. The sunny sector lays in the opposite massive and is better for cloudy, cooler days. 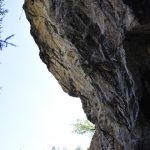 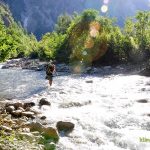 Crossing the icy cold river wakes you up 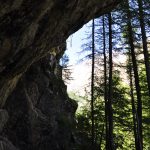 The overhangs are usually also not this empty 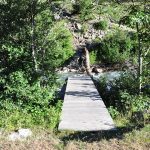 There’s this bridge that goes halfway. There’s another further up, and one more by the huge parking lot

An older sector with not so “trendy”routes will make you find yourself alone in these sectors of Bouchier. Once you get to there, park at the parking lot that’s signed out “parking du site escalade” which makes the walk a few minutes longer through the village. Right in the middle of the village, a path right behind a house leads directly to the crags above, in 10-15 mins. You’ll find 2 sectors before you, one  with little tufas, ledges and technical routes. Mind you, the gradings are a little tough. The sun goes out of the sector in the afternoon , a small breeze brushes the wall every now and then which makes climbing in the sun bearable for a little time. 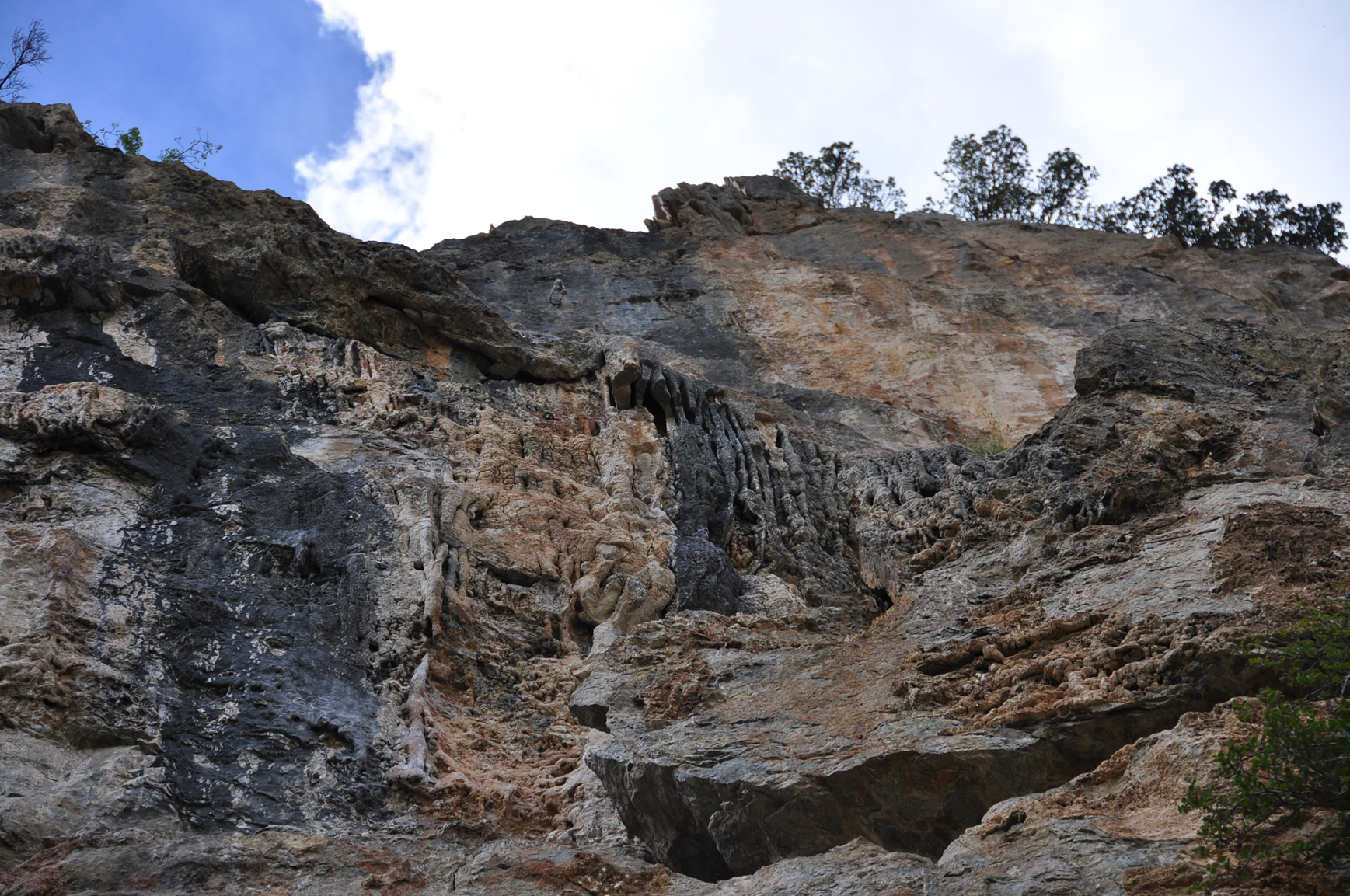 Some information of the area:

Escalade en Briançonnais Haut Val Durance (JJ Roland, 2009) for 29,- EUR. The new guide-book does not cover all existing areas, but includes areas that are new and still worth while to climb on. A combination of the older version from “Grimper dans La Haut Val Durance” (1998, Yann Maritime et JJ Roland) or the one from 2002 would make your documentation of the areas perfect, but not compulsory.

As I mentioned, if you have already an idea where you’re mainly going to head for, then it’s good to pick out one that’s near your crag. Camp grounds are found almost in every corner. Here’s a few which we have seen, but not tried them all (yet)

Run around in your bikini during the day, swim, go kayaking, biking, hiking or try out the “Via Ferrata du Gorge du Val Durance” with a Flying Fox that crosses a breathtaking gorge.   Via-Ferrata’s are growing faster than climbing sectors. Check out this list of Via Ferrata’s in the Region. (Update:08.2016)  Guides for all activities can be found in each town or campsite.

Best time of the year:

April – November. A wide choice of shady crags for the summer and many sunny sectors for the cooler days. 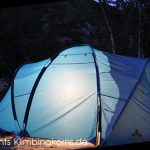 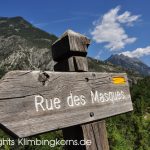 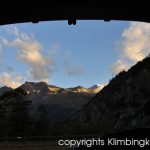 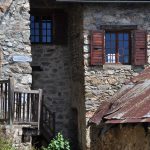 The little town of Bouchier 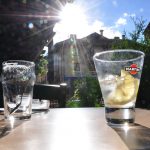 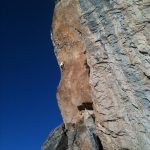 Note: This post was first written in 2010, and updated and revised in 02.09.2016. All recomendations are based on my own experience, this post isn’t sponsered in any way.