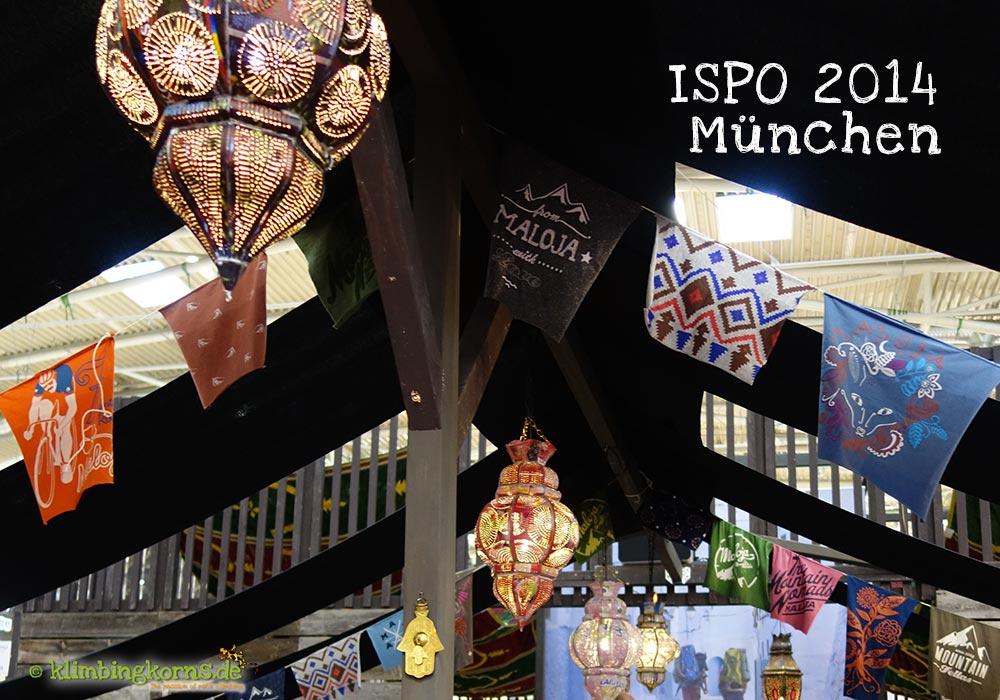 The ISPO 2014 this time was a little different from the rest that I knew. There was something different and yes, I was all excited about it. But let’s get to that a little later. The sports business trade fair is the place to catch up with trends for innovative gear and clothing in outdoor sports for the coming season. As always, it is a colourful event visited by many prominent sports stars from the world.

Apart from that, it is great to catch up with old friends and meet new ones. Friends? In a trade fair? Well yes, in this branch, business contacts feels a little more like friends – people whom you talk to about the latest hot spot, where you exchange ideas and experiences on gears, or just networking and expanding your reach. So, here I was at the ISPO, feeling quite fortunate for not having to pay for accommodation that springs up to 300++% than usual. AND, the winter came back just in time to welcome the opening of this years ISPO.

The hunt for innovation

Snow laid roads and snow falls pathed our way to the ISPO parking lot as I picked up Uli from AufdenBerg.de. But with a few short cuts and turns, we got there punctually at 9 and started off in our hunt for outdoor innovation at the ISPO 2014. Don’t be surprised if one day you’ll be reading about technical garments which you can wear, like smart t-shirts, or undergarments which measures your heart rate, breathing, etc, instead of the usual elastic band that you tie around your body. Yes, the future brings garments that transfers statics to your iPhone and your electronic devices so that you can be monitored easily and comfortably and increase the quality experience. Soon, you could probably tweet from your t-shirt too. Like that idea?

The Rollei has brought out a smaller, lighter camera with wi-fi which can be mounted on helmets, bikes and anywhere else you could think of to capture the moments on the move be it your free fall from the top of the cliff or the water park slide at the Fun park. There are thousands of possibilities to use the camera, and not just for neck breaking action moments. Smaller than any Smartphone, it’s versatile, mobile and has a waterproof case. Not new, but the size is. 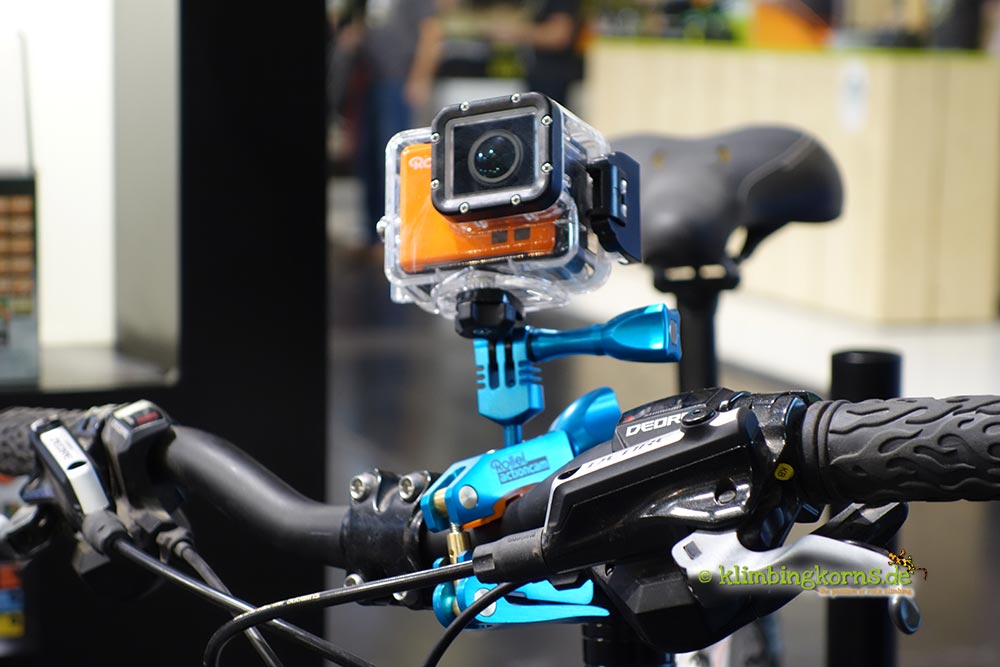 The american company Goal Zero who produces solar panels for independent energy for your technical gear has been busy redesigning their products, making the new solar panels really easy to use, enhancing the visual compatibility within the product family. Being able to have tested the first generation of these solar panels last year, I found that usability has become the uppermost goal of this company. Those of you who shy away from technic, wouldn’t have to worry much in the future. It’s all about Plug and Play and electricity when you need it.

My attention got caught in a flexible snow shoes from Fimbulvetr from Norway which uses the body weight to adjust to the terrains you are on. According to them, these are also good on steeper terrains, and possibly quite indestructible despite cold temperatures and harsh usage.

Known for their expertise in handling with Merino wool, Icebreaker introduces their warmest thermal jacket this season. The Halo and Helix LX Zip jackets is a water-repellent shell, with recycled merino loft that keeps you warm even when the jacket is wet, unlike the usual down or synthetic jackets. They are available as vests and hoodies and comes in lively down to earth colours. New Hike Socks good not only for hiking but also on cross-country skis were not to be missed. My review for these socks are coming up shortly.

We couldn’t resist but stopped at the booth with delicious looking cereal Flapjacks from Havervoll and it tasted soo good. I would’ve finished those lavish looking bars but decided to leave some there for the others. Lactose, chemical and sugar-free, made with plenty of natural ingredients is something that you can already get at some of your local supermarkets but not yet available in southern Germany. Don’t know whats taking them so long to expand down here – and while I’m being impatient, you can get them online too. What I didn’t tell them was that I could make them myself too. Okay, but I’ll still have to ask them for their secret ;-) 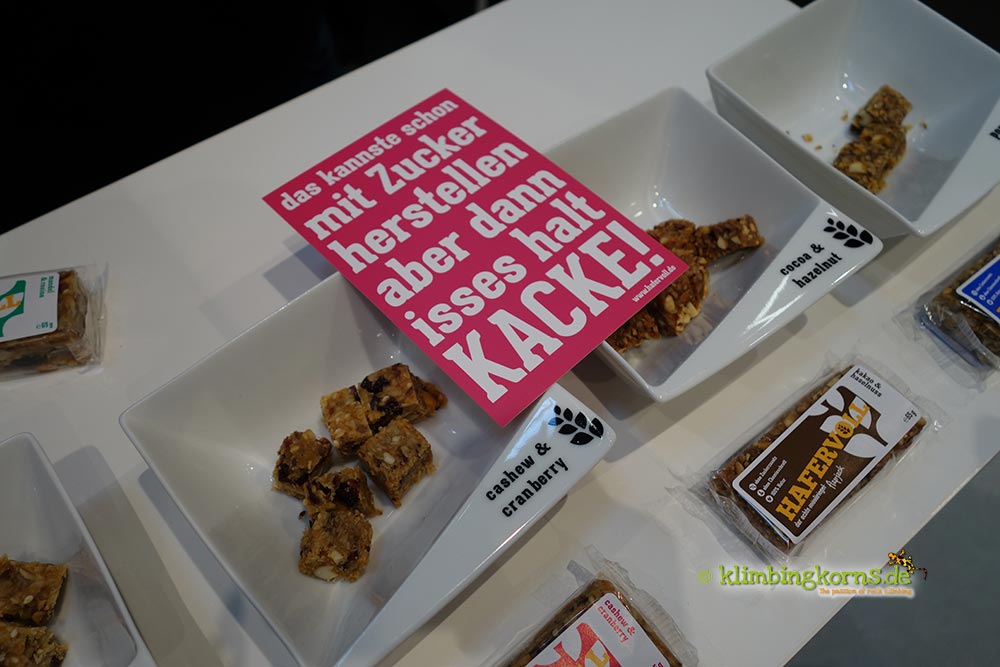 Highlight of the day

My personal highlight came at midday. Bergfreunde had a small Amuse-Guele in store for those attending the traditional Bloggers Meet, held at a little tent at the Mountain Hardware booth. Their special guest this year was Ueli Steck – a professional Swiss Mountaineer and Climber, also known unofficially as the Swiss machine. If you ever trained or climbed with him, you would totally agree on his Nickname. His last record-breaking solo ascent of the Eiger North face that was done in 2:50 hrs – an incredible achievement! It proved how much determination and discipline he had to make this happen. He confirmed that it was not a woman who pushed the decision to repeat his ascend just to break his own previous record but his very own. We heard about how his training plan looked like and it sounded actually more like a peak performance for the normal athlete when running the usual 5 units per week doubles up for a certain project. We learned that cheese and dried meat or beef jerky tasted better than sweets in higher altitudes and how lifestyle looked like at the Base Camps in Himalaya. To know how he feels about keeping so motivated gave me the impression of how a down to earth guy he really is, one that has healthy fears too, just like all of us. It was definitely a bonus meeting up with him! 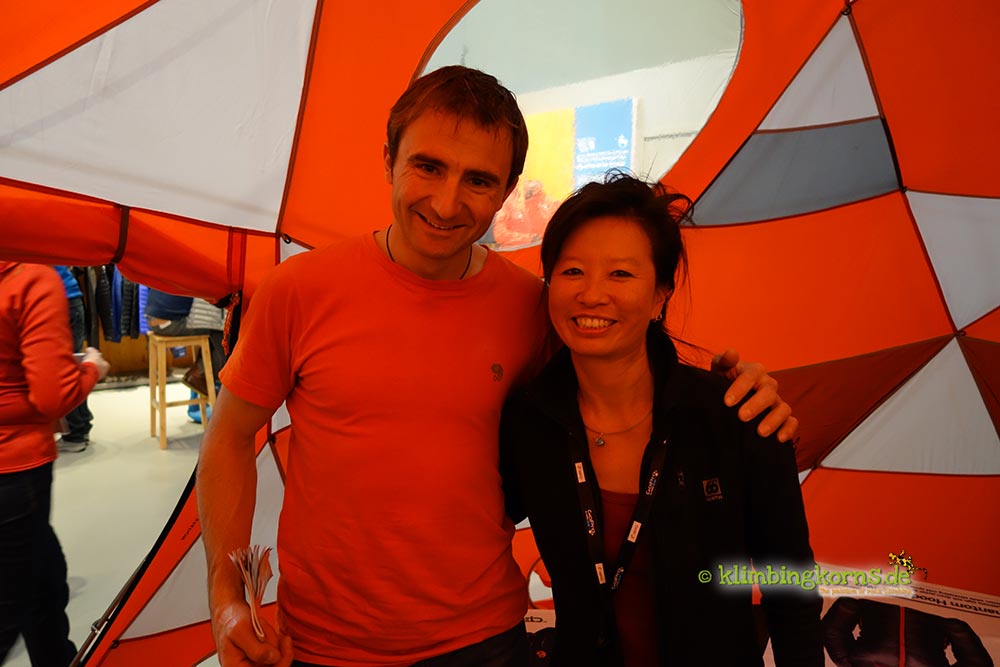 Coming out of the tent it was hard to concentrate on the rest of the things I still had to see for the day. But after a short coffee break, and chatting with some new faces like Hendrik from Hikingfinnland.com and Veit from AirFreshing (he’s also one of the ISPO Award Juries!) that I have only seen through the web, familiar ones like Jörg and Claudia, Sven, Chris & Martin, Dalton, Christian, Steve the quest continued through the halls. There was at some point when I found myself lost in a labyrinth of a complete different world full of surf boards, skates and action sports mania. Scrap cars were an eye catcher, no doubt. So tell me, what does a scrap car has to do with those boards? They brought the US to Europe. OK, I was missing something. 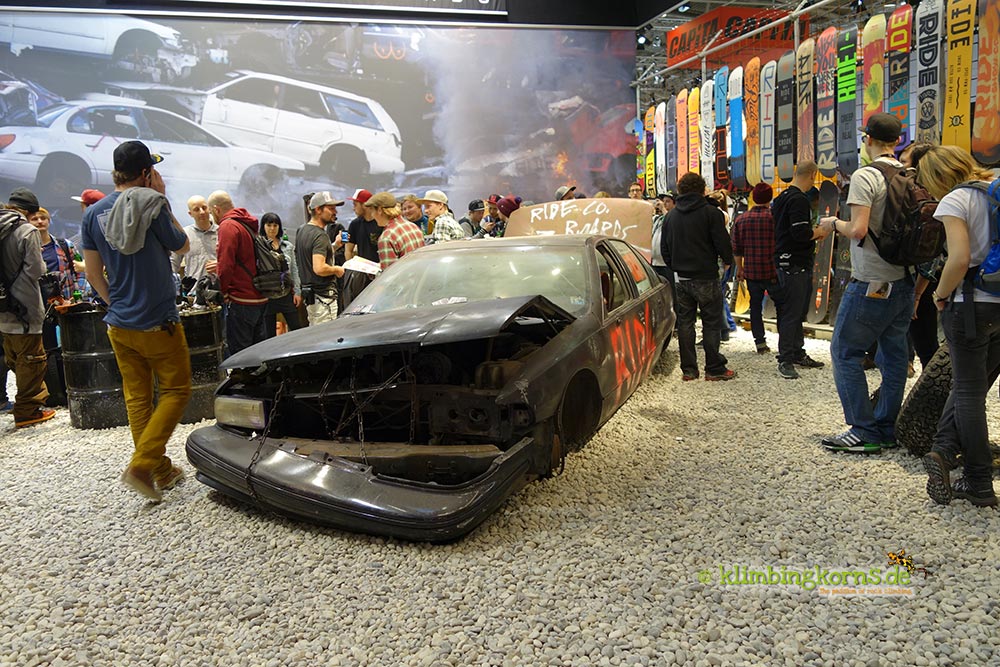 Finding myself back on track, and NOT impressed with the App of the ISPO I finally found myself at The North Face giant booth. Thermoball makes you think of little balls of clouds that keeps you warm when you fall in one of them. The Never Stop Exploring US company presented their new synthetic Thermal jacket that combined the best of both worlds (down and synthetic) together, giving the jacket an extra boost when it comes to warmth. The Fuse Uno Jacket which falls in the Hardshell category is also the first jacket that is manufactured out of one single piece of fabric. This means less seams that needs to be laminated and sewn together adding to more breathability of the garment. Woven together with a second fabric for sensible areas where abrasion and friction are inevitable, makes this jacket suitable in rough terrain and bad weather. Besides that the Fuse Birgandine Jacket won the ISPO Award this year which falls in the Free Ride category. 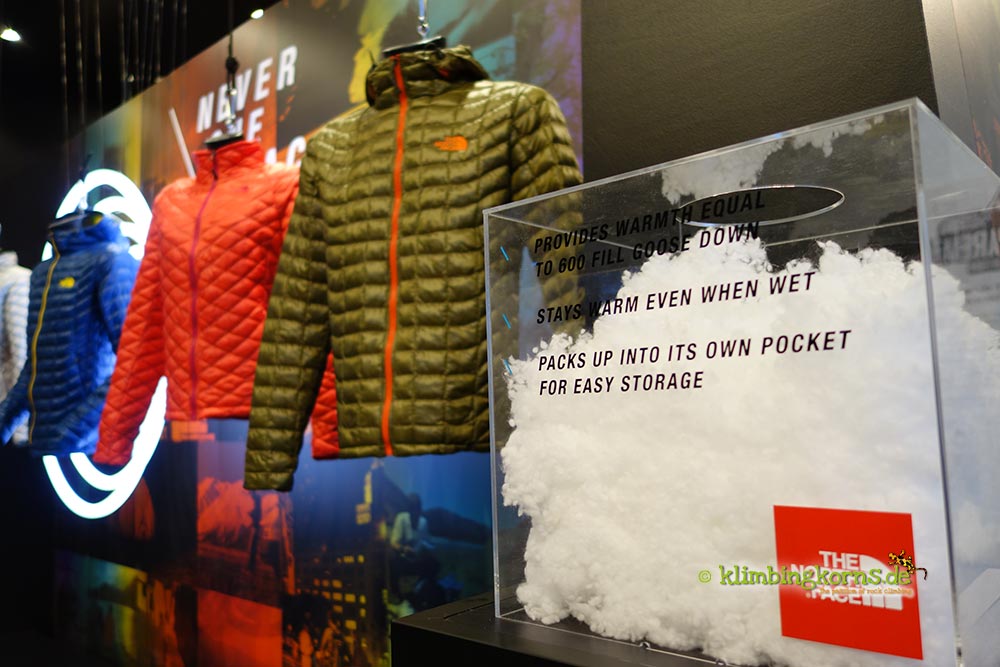 New rope bags will be available in Spring this year from DMM. Zenith, Void and Vector are some names you might like to remember once it gets in the market. It comes in different volumes and sizes and sounds quite promising.

At the end of the day

Each Trade Fair day usually ends with some awesome parties at the bar. We passed by the booth from Flow, a US snowboard manufacturer, quite awed with the live music from the Band LosAMol. Sven, Uli and I chilled out at the Scandinavian Bar with Pistacia nuts, some Erdingers Champ and I wondered quietly if Uli’s newly acquired BBQ Grill from LightMyFire would’ve been big enough for a juicy T-Bone Steak at the fireplace. Nothing utterly new but the usual “it was colourful, lighter and more technical” words that sums up my day at the ISPO this year. It is a joy to see how manufacturers are growing very much together with their consumers and athletes and how each garment becomes more and more personal each year. 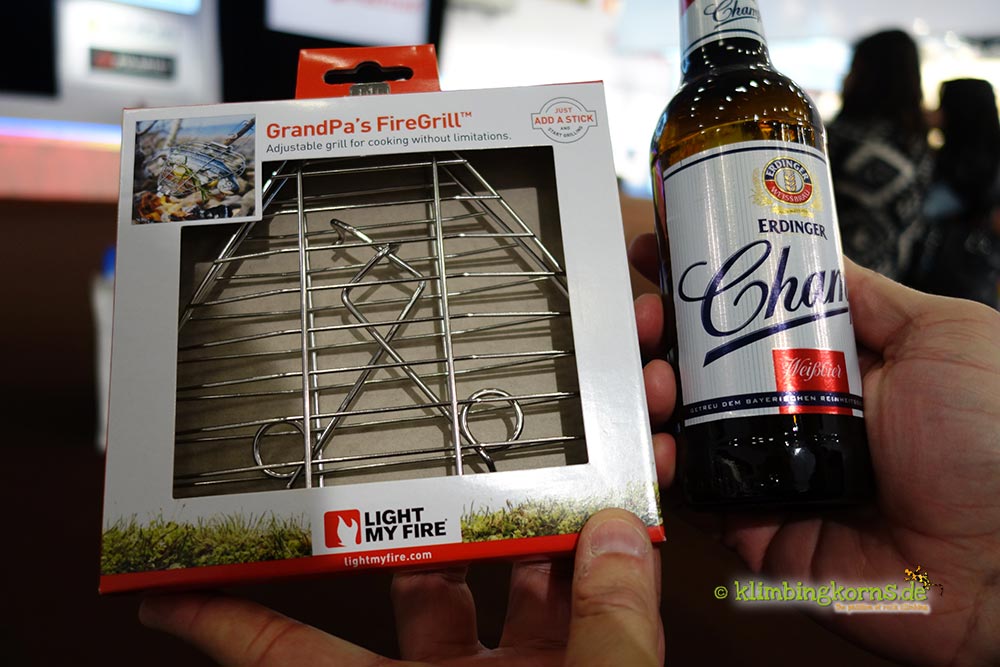 I managed to cover only a small percentage of the ISPO in one day. Nevertheless, it was a back-breaking 12 hour trip that must’ve made at least 16km of walking the halls. Unfortunately, my Ambit failed to track me up to confirm ;-) Now that would definitely be an innovation to plead for in the future!

More reflections and impressions from other outdoor bloggers who were at the ISPO 2014 in Munich: 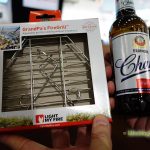 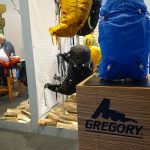 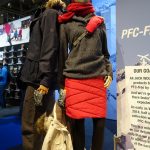 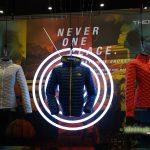 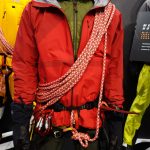 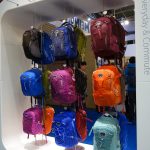 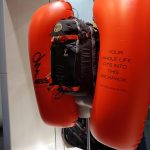 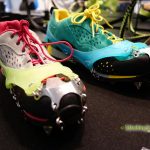 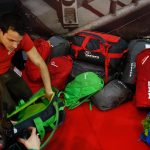 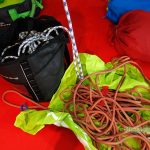 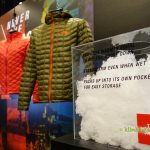 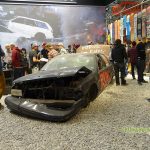 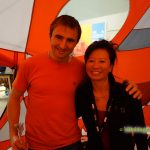 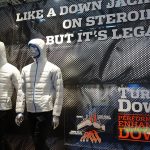 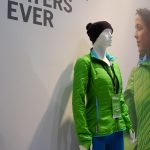 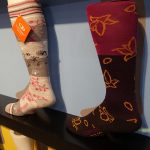 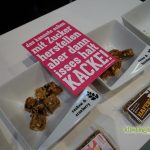 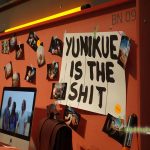 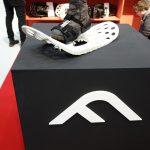 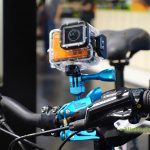 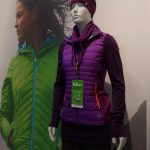