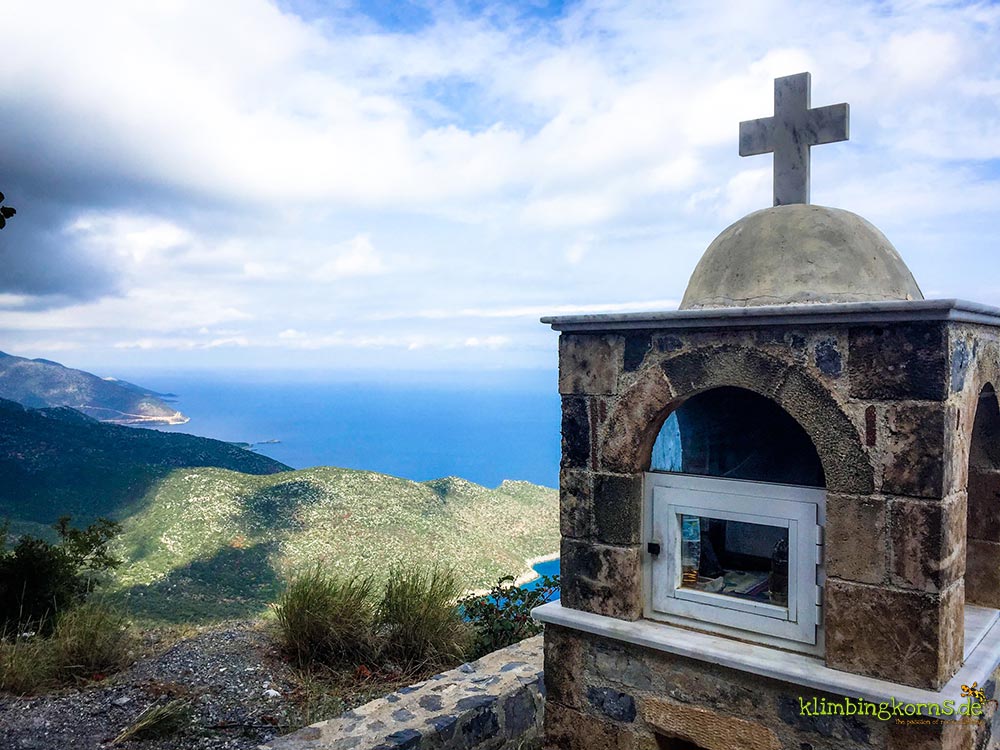 A few decades back, if anyone asked you if climbing in the Peloponnese was possible, you would’ve shaked your head.  Sun, white sandy beaches and crystal waters are some of the things that describes a normal vacation in Greece. I have seen Greece with its beautiful beaches on the other islands, but never really expected that the mainland would be full of stunning mountains and cliffs. Some steep and rugged,  others green and mysterious. And climbing here? Definitely possible and good!

Climbing in the Peloponnese

The best way to see and experience the Peloponnese in Greece is without doubt, by car or with a van. The first time I heard of possible climbing in the Peloponnese was about a decade ago when some of our friends toured the region. They came back and said that there was plenty of potential, but it was not the dream what you would expect. Anchors were missing, bolts were strangely placed, and the rock was not always solid. Running out of ideas of a good winter/autumn destination, we finally gathered our courage to cross waters with our car, eager to explore for ourselves the news of hundreds of new routes and sectors popping out from the east coast.

It was so hot when we arrived. We wanted to first to explore the beautiful beaches of Peloponnese intensively and started our tour on the west coast of the peninsula, scanning each beach that was rated Top 10.  Voidokaila beach (Ochsenbauchbucht) Golden beach, Katouka beach, the Galovia Lagoon, Pounta beach, Vladychadia which all had a touch of the Caribbean. We ticked them off as if it was  some obligatory historic ruins. But since we don’t beach out every year I was glad to have the opportunity to finally do so and try transform hubby into a stunning surf God. After a week of beach fun, we were ready to hit the rocks with our sun-kissed body and sand scrubbed skin. Mr. and Mrs Surf-God tattooed on our foreheads 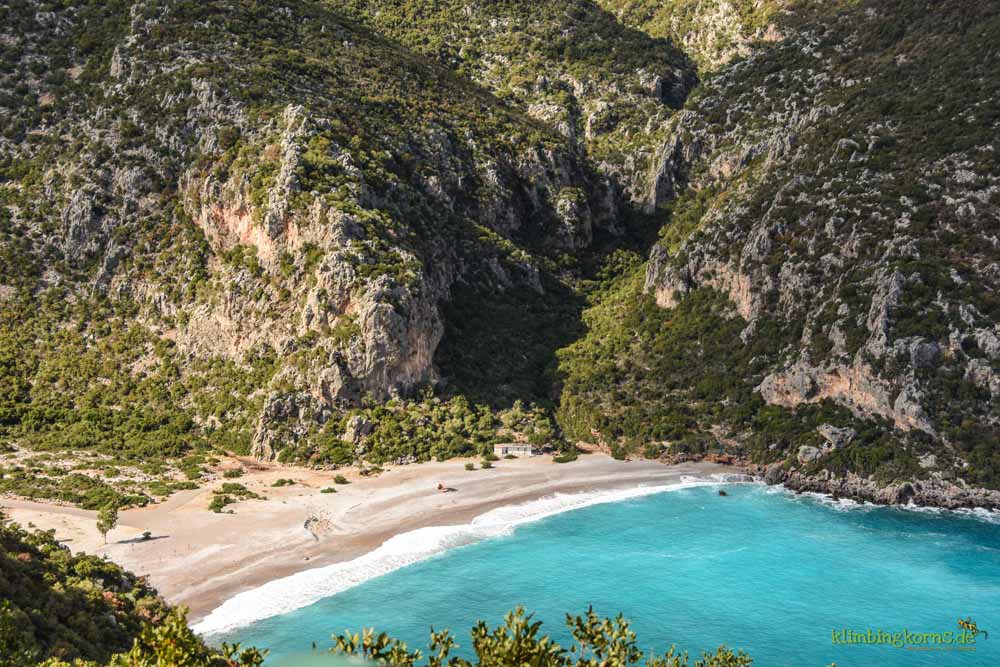 Vladychadia beach. A paradise with everything you need to have

There are many climbing areas spreaded out in western Greece. Here, I’m focussing on the bigger and important ones we saw in Peloponnese.

In my previous posts on the Peloponnese, I described two great areas which lies on the east coast:

Generally, if you want to stay put in just one place, its best to hit the densely bolted cliffs of Leonidio or the new hot spot in Kyparissi. Once the new coastal road connecting these 2 towns finishes, combining your climbs between these 2 villages would be a breeze and a perfect treat. Perfect because, Leonidio has plenty of sunny crags, Kyparissi has lots of shady crags. (!) Not far away is Lagada and Nedousa which lays in Mount Taÿgetus, near Sparta. Zobolo looks further away in the map than it is. It takes about 2-3 hours from Kyparissi or 2 hours from Sparta.

We arrived in Leonidio at the end of our road trip and spent a few days climbing and checking out the area. During our stay, the new guide-book 2016 for Leonidio was availabe (Update: in 2018 the next edition appeared) . More than 50 sectors and about 1000 routes to fill off a few years of climbing in your life are now at your disposal. The style of climbing varies between climbing on holes, ledges and Tufas. The typical red greek limestone – that resembled red gold – can sometimes be fragile. We saw now and then a few routes that were fragile, but did not experience any rockfalls. Generally, the bolting quality is quite good. However, due to the fact that different route setters of the world worked on those routes, the style and distances vary from sector to sector. You should feel comfortable if you’re climbing from 6b and above. There are some walls for beginners to choose from however, the majority lies really between 6b and 8a

Theres a good climbers hang out at Pánjika Cooperative in Leonidio with good music to chill an tasty  food (lots of vegan) to fill your bellies. They have a small selection of climbing equipment and guide-book.

The connecting road to Kyparissi has been under construction for ages and should finish sometime soon. (Been saying that for the past couple of years)  Once done, you can switch easily between a choice of shady walls in Kyparissi  and sunny walls in Leonidio.

Leonidio’s heart beats for the climbers. The infrastructure is set to have all amenities in a town. Bakeries, restaurants, camp grounds, rental homes and rooms, wonderful beaches, gasoline station and ATMs makes sure you don’t want to leave this town. The locals are friendly and kind, they appreciate the climbers who are the more off-season tourist in the area which provides an extra source of income in winter.

We returned to climb just in Leonidio in winter 2018 and stayed there for a whole month. 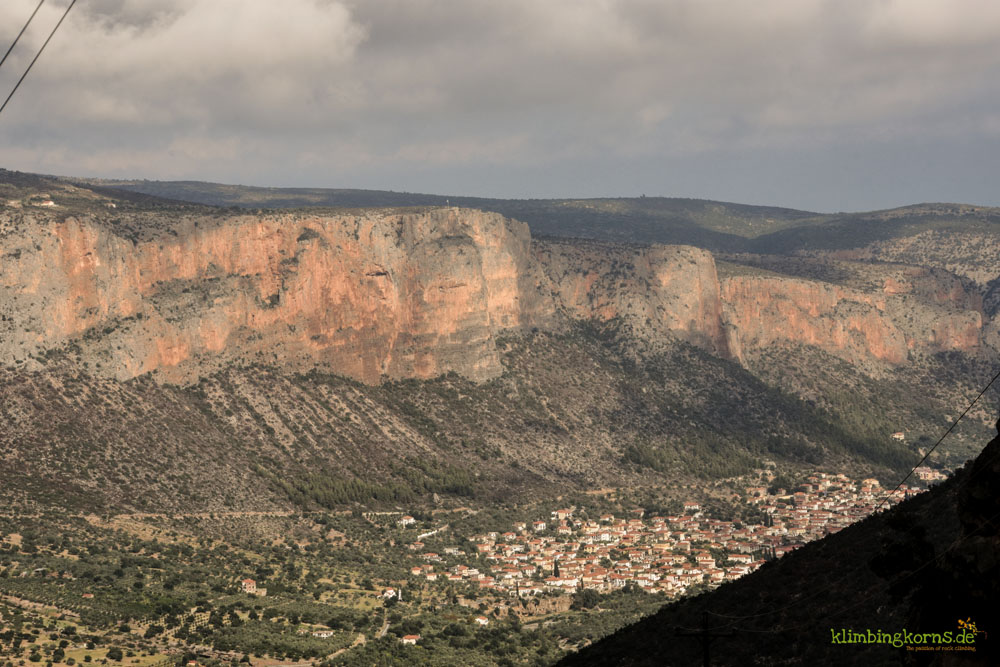 Some of the wall and sectors high above Leonidio. 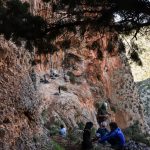 Sector Mars. A popular crag at all times 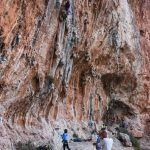 A world of Tufas 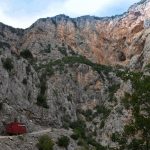 Even driving up to the St. Nicolas Monastry is an adventure itself 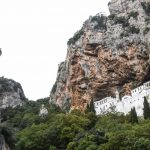 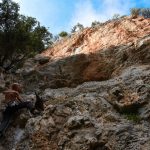 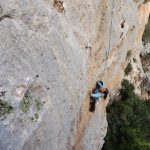 Nima in her element 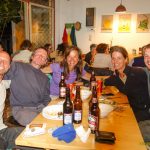 Good times in one of the climbers cafe 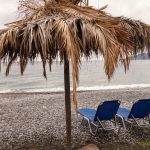 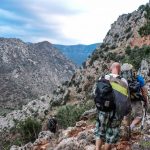 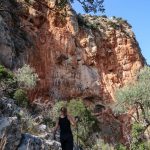 Zobolo is on the southernmost tip of the Peloponnese peninsula. We hadn’t planned to go there as it was a 100% sun trapped winter crag. However, when a huge low was coming our way, I knew we had to run.

The climbing sector Zobolo lies just a few km after Neapolis Lakonia. The dirt road brought us straight to the impressive massive of cliffs which you can’t  miss on the way. The red desert landscape full of boulder blocks keeps you in awe before you realize that a thin-film of red dirt is everywhere on your car, shoes, bags, mouth. The climbing area consists of 3 main sectors and a separate west side sector on the other side of the valley. On days just before a storm brews up, it can get very windy. It’s probably better to avoid the area completely if you are expecting a thunderstorm at the tip, as the area is very exposed.  (Winds and lightning)

Majority of the routes here moves around the French 6s, which gives newbies and soft rockers a big playground. I recommend a helmet in all the sectors.  Goats loves like us, the lovely views from above and can sometimes be found wandering on the edges of the cliff, causing a rainfall of rocks. In some sectors, the holds can be razor-sharp, or you might find washed out holes. There are some multi-pitch routes here and there too. The bolting is generally good, but pay attention to rusty bolts as the crag lays just before the sea.

Zobolo is a good destination in the winter, or on cloudy days. Otherwise, it can be really hot. 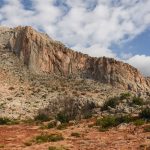 You can’t miss the massive upon arrival 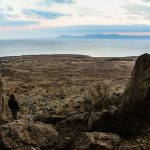 The southernest tip of the peninsula 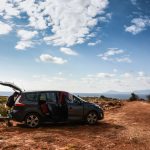 The simpler, the better. We had everything with us that we needed. 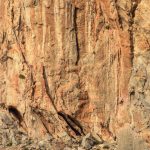 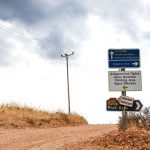 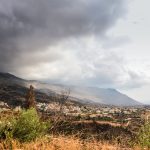 Agios Nikolaos from a far 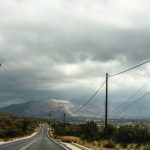 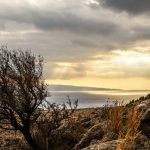 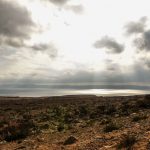 During the day, the straits are filled with heavy ship tankers

We were quite lucky on our trip to have plenty of good weather, and only a few days of rain. The climate is generally hot and humid, but I found that temperatures on the east coast was much cooler than when you were anywhere else while climbing in the Peloponnese. We had the crags and sectors quite to ourselves while we were around – with the exception of Leonidio. Definitely more traffic, more international and bustle especially on popular sectors.

The mozzies were a nuisance in autumn. Especially in the evenings. Remember to wear long, loose baggy pants or have an extra bottle of Mosquito repellant along and keep spraying.

The rock in these areas are just … awesome. Of course, there are still routes and sectors where “Anchors were missing, bolts were strangely placed, and the rock was not always solid”. Some routes were so fresh, you could still peel some of those rocks off the wall. But that’s logical.

Leonidio and Zobolo, are great destinations for winter while climbing in the Peloponnese, as many of these walls are south facing. However, there are some winters when you might even get to experience some snow flakes in these areas (like in the winter 2016). If you’re playing with the idea to spend the whole winter there, why not? The Peninsula is big enough to keep you busy for a long time.  For some, like Nima from Abenteuer-Unterwegs.de, together with her partner in crime – Steve, they were escaping the middle european winters and spent the last half a year practically on this peninsula.

The peninsula is big enough to run about for weeks to discover plenty of historical monuments, sandy beaches, mountains and cliffs unlike being stranded on just one island. Yeah, we will definitely be back.

There has been plenty of new developments recently. Therefore, you can expect a new Greece Guidebook to appear in May 2017.

The Best of Greece Sport Climbing (Edition 2014 – out of stock)

70 m is sufficient for these areas. However, with an 80 m rope, we didn’t have to worry much if the rope was long enough on longer routes.

Many of the climbing areas, like those in Archaea or  Nedousa are laid far away from any official camp grounds but have a place where you can officially set up a tent by the crag site. If wild camping and tents ain’t your thing, there are lots of guest rooms and hotels or rooms / studios for rent everywhere in Peloponnese. If you’re not particular about your rooms and are traveling in the off-season, you will always find accommodations available. During climbing festivals, expect of course more traffic than usual.

2 thoughts on “Climbing in Leonidio and Zobolo – the sunny getaway -Peloponnese III, Greece”