Cuneo is a little city, some 2.5 hours away from Finale. Totally amazing, to discover a gem in an almost forgotten, too far away to reach sports climbing Mekka in Italy.

The best time of the year to climb for me is autumn. By then, the body has gotten used to holding natural rock all summer long, the psyche is mentally stabilized and you’re feeling just about in your element before the cold winter starts to destroy all the nice things you feel about yourself. But it was differant that year. We were mentally drained and physically unfit for a ticking climbing holiday. Nevertheless, we were excited to discover new places we’ve not seen before and were ready to start easy.

I remembered a candid conversation we had 10 years back, with an italian climber we met in the whereabouts of Nice. After writing down all the routes that he recommends in Andonno, he paused a while, cocked his head and said…“actually, Andonno is so great, I don’t know why we were here in France! Lets go back now.“ I could not forget those words. 10 years later we finally made it. Hello, Andonno!

The first day brought us to Sector Amphitheater where it was easy to change between the sun and shade. Sector Guss, with long, sustained climbing in limestone is in the shade until about 2pm, and you can change over to the opposite sector Forse in the afternoon. The climbing here is technical and pumpy. So if you have never shoved, pushed and used your toes all the time way up a route, here’s your chance. The routes are all awesome and worth a try. Forse, a 25m 7b+, translated as „Maybe“, says it all. Maybe you can, and maybe not. Enjoyable, very technical and wow. The routes in the middle of the sector are great for warming up before you start on either sides of the amphitheater.

Sector Guss is in the shade until about 2pm, the cool wind makes it certain that you stay ventilated and cool before you start on any project. All routes here are really good, with Guss 6c being the main route named after the sector. The easiest „warm up“ is „ Fatti Miei“ After trying it, you might ask yourself if you are ready at all to try the other routes in the sector…It was one of the hardest 6b+ I have done in years. “Use your feet. I said use your feet!” still echos in my head…

On the sector to the very right of Andonno, there are some sectors with some shade a little later in the afternoon. Total body and Fuzz Punk are 2 warm up routes on smaller crimps, technical and yet beautiful. The rock here has fine little structures that are sometimes sharp and painful, but it has been so frequented that the pain becomes bearable. Jollie Roger, an overhanging 15m 7a+ leads you up a crack to a roof where the crux lays before the anchor. It’s best to go there on cloudy days, best conditons are found on colder autumn days, even though a cooling breeze blows at all times.

This area lays in the parallel valley to Valle Gesso on the road that leads you to Colle de Tenda. Valle Ventagmena lays a Crag that has been extended by a new sector with easier routes exposed to the afternoon sun. Discover how much effort have been done in order to make it ready for the climbing crowds. The crag faces northwest and sun gets in in the late afternoon. The routes are long, the limestone reminds you a little of the Pursteinwand in Pustertal (South Tyrol) and most of them are 35 – 40m long! The newer sector „Gala Verna“ that lies right to the beginning of the entrance has about 10 newer routes ranging from 5c – 7b . „Il Respire del Dragon“ 6b+ has everything in it while „Le Bestia le Veya“ 5c makes a great warm up on an easier level. Dogs here seemed welcomed. 2 dog bowls for water are chained together with the small little benches. We didn’t see any dogs while we were there but got the idea that it could be many in the weekends. Technical routes on a long sustained wall are found far right. „Pudon“ a 30m 6b+, Il Zingano a 6c with a plus and the 7a+„Rhumba“ to end the day, made ours an easy fulfilling one.

This crag lies on the opposite of Folchi, a few serpentine down the road. The 15 mins access and sunny side makes this crag a favourite to climb in the late afternoon by the locals. Sometimes, groups of military officials train here in the week days too. Best on cloudy days as even though there’s a little breeze, it’s too hot on days above 20°c. Unless you are sun proofed and don’t mind losing all your skin on the rock. We found this huge lizard on the way there though…he was at least 1.5m long and …yikes!

A gem from all the sectors I have seen in the area. 20 mins access bringin you right across the hills to a fantastic rock that resembles the shape of an iron. There are not many routes there, but the climbing here is sustained, with tufas, holes and ledges all in 25m long. Lovely rock in a magnificent ambience of serenity and views to the surrounding summits of the area. What a lovely place to be! The crag faces west where the routes on far rights gets sun earlier than the rest. Oh yes, if given the chance, I would have definitely bought over the Loc. Giranda and settled there for the rest of my life…

…until we discovered La Brique and it’s beautiful rocks laid high up above the medieval city, overlooking the summits of Cma di Martai, Monte Ceraine, Monte Grai. La Brigue lays just a few km after the French border of Tende in a side valley in a wonderful setting. There are a number of sectors here and it offers climbing in all sets of levels.

The Sector Grotte is probably the only sector that can be climbed in the shade after midday as it faces east, and the violent winds makes this a perfect venue for summer when it is too hot or humid to climb in the lower altitudes. A windproof sweater and beanie is perfect for this place, even on hot summer days. Routes starts from 7a to 8b+ where the majority of the levels are 7c and above. The climbing is athletic, found with tufas, edges, overhanging and plenty wind. New routes have been bolted here the last years, making this the playgound for those seeking pumpy forearms and biceps at the end of the day in long 30m routes. „Il Saggiatore“ 7c and „La Question“ 7c, both worth a quick try for those with little time. The athletic „L’Opposition Machiavelique“ 7b which tweeks to the right from the same start of „Le Grand inquisitoire“ 8a is one of the easier routes here. This crag is about 30 steep hot minutes from the road below and is next to the neighbouring Lulu Pilier Sector which offers a few easier routes from 6a+ in 30m. Yes and slowly, we were getting warmed up.

If you have a 4×4 and enjoy driving up a narrow dirt road for 7 km, this crag is the venue for those of you searching for upper grades in an overhanging wall. Our car didn’t make it, but I did managed to get a photo of the crag. The routes there must be awesome. Next time, another car, better preparation.

Definitely a place not to miss if you don’t shy from strong winds and a no entry sign post to a dirt road at 1800m altitude. This area is actually even worth the drive if you are not planning on climbing. The crag access takes you pass the Fort Taboule through a dirt road where you could park at a wider bend and walk within a few minutes to the crag. Unfortunately at the time we visited this place, the roads were under construction, therefore, access was not possible. Nevertheless, the views here were breathtaking and the drive up heart stopping guaranteed. 4×4 recommended but we did well with our normal Renault.

The areas around Cuneo is definitely worth a visit. If you’ve seen all the climbing areas in the coastal areas and are looking for places that are far more quiet but not lacking in quality, this could be the place for you.

Not only does the strong always rule the land. There are a few areas worth mentioning for the plaisir climber. Casterino lays high up in a sunny valley, overlooking the Lac de Mersches on a „beach“ which makes this double the pleasure to climb here. Elementary routes from 3a to 6b, not always easy. The crag faces south and is just a few minutes walk away from the parking lot. It is situated at ~1400m altitude, and a cooling breeze ensures that climbing in the sun can be bearable in hot autumn days. Climbing on Quarzite (Gneis) means good friction on your rubber soles. The routes are perfectly bolted and are described on the signpost that lays directly across the crag. A perfect venue for the family, a wonderful peaceful side Valley (Vallee de Merveillees) that splits away from the Vallee de Roya. 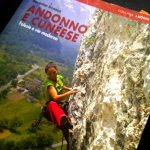 On the French Border

12 thoughts on “Climbing in Cuneo, Italy and crossing the borders to France”