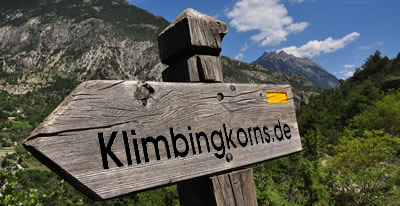 Sport rock climbing is the act of ascending steep rock formations using the physical strength of the body, your mental and with the help of specialized gear and safety equipment made for this sport. As technology and material for equipment improves each year, this sport seem safer to deal with. We have a better possibility today to concentrate solely on our physical condition, training and pumping up those biceps for the climb of your dreams. With the variety of grading systems, you can accurately compare the difficulty of the climb. Many existing systems emphasize the technical difficulty, some the endurance and some others the number of ascents the climb has. It’s hard to compare these grades in differant regions of the world as the rock varies. You’ll find differant routes to climb on with granite, limestone, gneis, etc.

Sports climbing used to be a sport, if mentioned in the 90ties, it gathered raised eyebrows in the crowd. Nobody would understand why someone would take the trouble to climb up the gripless wall when you could walk the easy and comfortable way up to the summit on the other side. Nobody understood
about getting psych in one single route and spending many hard working days to just free climb it. But also, nobody told them that it was better than ecstasy when you finally succeeded!?

Today, climbing is trendy. You would find a boom of numerous Gyms in many cities offering Sports climbing, most of them over crowded and air filled with Magnesia. Outside, the natural climbing areas obviously filthed out with signs of civilisation left behind ruthlessly at certain times of the year. It isn’t a wonder that more and more areas get banned from further climbing if we don’t push up our awareness and respect for the environment soon enough. I’m hoping everyone who climbs gets to experience this awesome sport outside, savouring everything that comes along with it – hard work, pumpy arms, shots of adrenaline, sun and the beauty of the nature. It’s a love story just between you and the rock. Long lives the rocky planet!

Long gone is climbing in Sicily a hidden secret for sun rock fans willing to escape the winter. The island is full of mountains to climb, hike, plenty of [...] ... Read More »

The Kaipara MERINO HOODY SWEAT JACKET 270 is a 100% merino woolen midlayer that’s “Born in New Zealand. Made in Germany” – so their slogan. Page Contents1 Who is […]

Why build a Hangboard frame when there are ready to use door mounting systems available? A lot depends on which material your door frame is made of. And your […]

10 Christmas gift ideas for the climber

For some, mention Christmas and you see them running off leaving you wondering what you said wrong?  Others would bake, decorate, light up their houses 3 months before. I usually […]

The Creek 50 Pack is a Toploader for climbers intending to spend a gear-intensive day out at the crags. And it has all the benefits of a haul bag […]

The Power Air Houdi is the result of an innovative project between Polartec and Houdini Sportswear, who was one of the first few outdoor companies that integrated the Polartec® […]

Whaam! A blog stick hit me again, no it was two! Thanks to Rene from Outdoor Spirit and Jörg from MiniMuli I have now two sticks lying around waiting […]

Not too long ago I received a “Stöckchen” from Stefanie at Gipfelglück, challenging me to show which 3 items I always have in my backpack. A “Stöckchen” is a […]

Repair your Down Jacket or Sleeping Bag yourself?

Zzzzzrrrraaaack! Oh no! You turn around only to find your brand new down jacket with an ugly L shape rip and a cloud of feathers in the air. You […]

When I started climbing 2 decades back, bouldering was just a form of training at home or at the gym when you aren’t climbing. You make little boulder walls […]

If you’re looking for an alternative to climbing in Finale, cliffs in and around Castelbianco offers a handful that’s worth a few weeks of holidays to spend your time on. […]

Can’t find what you are looking for?

By continuing to use the site, you agree to the use of cookies. more information